For close to four hours, the NCP leaders did not leave Ajit Pawar.

Devendra Fadnavis, who was anxiously waiting for Ajit to take charge of the office alongside him, had to leave within minutes.

The anxiety in the BJP camp was growing and the NCP was getting confident as they were slowly moving towards success in convincing Ajit Pawar.

The message given to Ajit in these four hours was simple.

He was told that he will be defeated on the floor of the house, but everyone in the party wants that the Pawar family shouldn't break, as that will be disastrous for the party as well, and hence he should return to the party.

With Ajit Pawar's chair next to him lying vacant, Fadnavis chaired his first meeting in the Committee Hall of Varsha.

The initial plan of getting Ajit to attend the meeting to make a big announcement had fallen apart.

Fadnavis chaired the meet, but the empty chair next to him kept distracting his attention. The nation was remembering the most dreaded terror attacks seen in the history of the country.

Every year, the Governor, Chief Minister, top state police officials and other state dignitaries offer tributes at the memorial building near the Police Gymkhana on Marine Drive.

Fadnavis had reached and his staff was constantly keeping an eye on the watch. Ajit Pawar, the Deputy CM, was expected, to reach the venue before the Governor. That, however, didn't happen.

Ajit Pawar's actions over the last two days had puzzled Fadnavis and the BJP.

Ajit had left his house early in the morning, but rather than coming to the 26/11 memorial, he had gone somewhere else to meet someone important -- someone he couldn't say 'no' to... 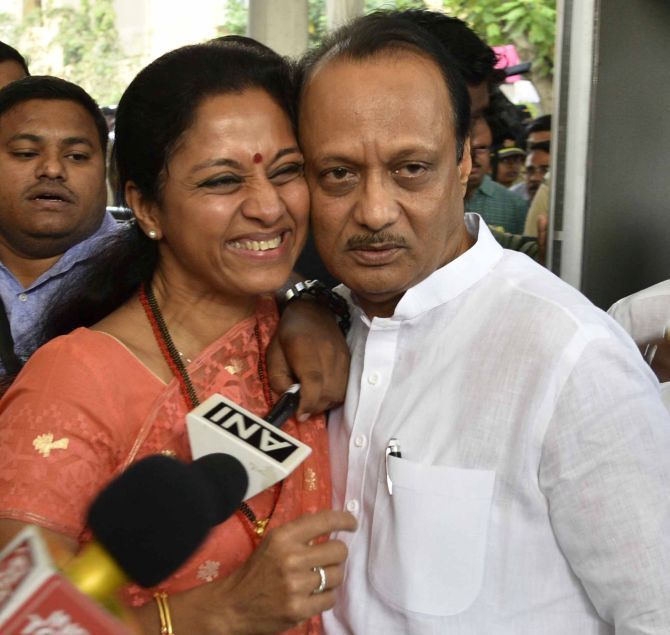 After leaving his house, Ajit started towards Nariman Point.

The media cameras followed him, expecting him to head towards the 26/11 memorial.

But his car, rather than taking a right towards Girgaum Chowpatty, took a left turn towards the end of Nariman Point.

He straightaway headed into the hotel, where someone was waiting for him.

The moment Ajit saw the person, he bent forward and touched the person's feet.

There had never been such an awkward moment between him and his Kaki in the past.

There was a long silence as Pratibha Pawar, Sharad Pawar's wife, saw Ajit for the first time since the coup.

Pratibha Pawar had seen how the events had distressed her daughter.

She was now sitting with the man at the centre of the coup -- the nephew who she has always treated like her son.

Caught in the silence was Supriya Sule's husband, Sadanand, who also shared an excellent bond with Ajit.

Pratibha Pawar wasn't the first person from the Pawar family to speak to Ajit.

Several other family members had approached him with a single line message: Family first, politics later!

People who know the Pawar family really well say that the Pawar clan, unlike other political families, is known for its values and a great sense of bonding.

Everyone in the family has excelled in their respective fields.

The value that is imbibed in the Pawars is to respect the opinions of others.

There could have been differences of opinion in the family, but they were never discussed in public.

No doubt that Ajit's rebellion had not only hit the party hard, but it had hurt the family immensely.

The meeting between Ajit Pawar and his aunt wasn't a very long one.

Very few words were spoken, but a long message was conveyed.

No politics was discussed between Ajit and his Kaki; there were no requests or deals.

It was just an uncomfortable hush that communicated a thousand words...

While leaving, there was a positive smile on Ajit Pawar's face.

He left with a renewed poise... While coming out of the hotel, Ajit's original car and his security left, giving the media a slip.

He left in a different car, all alone.

A team of NCP leaders was going to meet at Praful Patel's house at Malabar Hill.

Apart from Patel, Chhagan Bhujbal, Sunil Tatkare and Dilip Walse-Patil were already there.

They were waiting for Ajit to join them.

This was the first time that Ajit Pawar was coming to meet them in three days.

The hearing at the Supreme Court was about to begin.

The NCP team wasn't sure if Ajit would come but just as the judges were about to arrive, he reached Praful Patel's house.

This was the last effort NCP was going to make to get Ajit back.

'Look, after the Supreme Court orders there is little left as an option for you. If you were to become the Deputy Chief Minister with the BJP, you were anyways going to get it here as well... If you stick with the BJP after the Supreme Court orders and the floor tests fail... There will be nothing left with you...But if you come back, that offer still stays... plus the family and party stay intact...' the offer was put across the table yet again in a more assertive manner.

'Save yourself the embarrassment by resigning before the floor test,' one of the leaders proposed.

The meeting ended on a positive note, as hands were shook and hugs were exchanged between Tatkare and Ajit Pawar.

Ajit straightaway headed to Varsha, which was a stone's throw away from the meeting spot.

Fadnavis and other top leaders were present there and Fadnavis was expecting Ajit.

By now, he had an inkling of what his Deputy Chief Minister was up to.

Fadnavis had sensed the inevitable. Both excused themselves from the other leaders.

'I have decided I cannot continue like this. I will be resigning. Things haven't worked as I wanted them to,' Ajit informed Fadnavis.

'If that's your final decision, then I have no problem. But we could still work out something. Think and let me know, no hurry...' Fadnavis told Ajit Pawar.

Ajit Pawar had already made up his mind. Family ties prevailed over politics.

At around 2 p.m., he resigned and his final decision was communicated to Fadnavis. 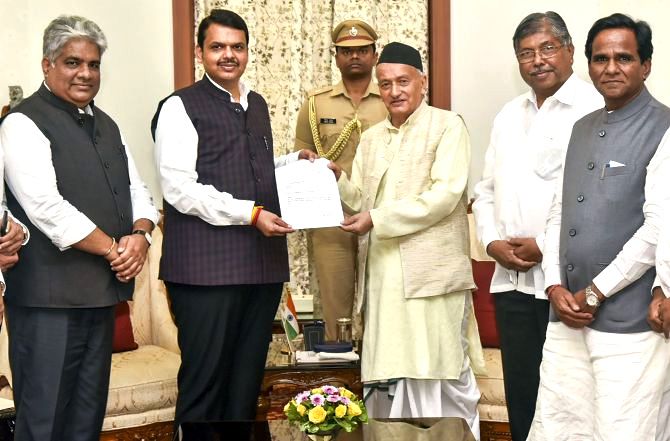 Dozens of cameras stared at him as he began addressing the media amid a live telecast on all regional and national news channels. All eyes were on Fadnavis as he started speaking.

Fadnavis announced his resignation barely three days after he was sworn in.

The only man after Vasantrao Naik to have completed a full term as Maharashtra's chief minister was ironically now also the man who had become the state's chief minister for the shortest tenure of 80 odd hours! Bal Thackeray's room has been preserved in its original condition by the Thackeray family.

All his things, including his bed, pillows, glasses, etc have been kept intact.

He may have been the dreadful leader who could bring the financial capital to a grinding halt at the snap of his fingers -- one ' ' from Matoshri would bring thousands on road -- but inside Matoshri, he was a doting father - 'Pilga', as he was called by his sons.

Uddhav, the youngest, was called 'Dinga' by the family members.

He was not only the youngest but the most submissive and obedient among the children.

The first thing that Uddhav did after reaching Matoshri after being selected as the chief minister candidate was to go to his father's room.

He knelt down in front of his father's portrait, ran his hand over the bed and with a big lump in his throat, said, 'Pilga, tujha Dinga Mukhyamantri zala... (Pilga, your Dinga has become the chief minister).' 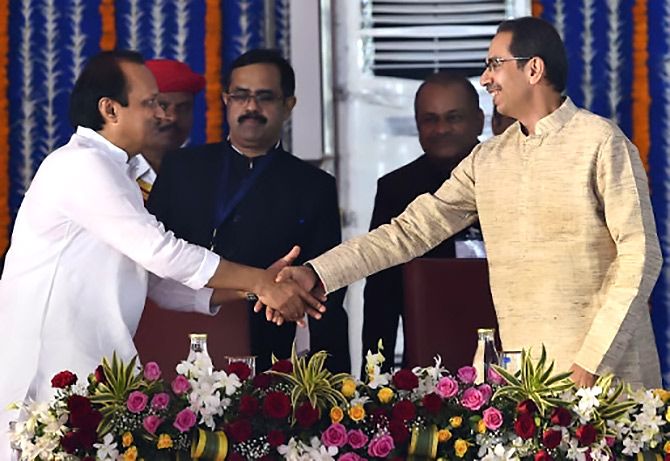 Amidst the rapid political developments, Ajit Pawar kept himself detached for the day.

His decision had saved the party from a big embarrassment.

But most importantly, his decision had saved the family from permanent damage.

Family members were happy and thanked Ajit for the mature move.

While announcing his decision to family members in the morning, Ajit had said that he would like to quit politics.

His car started from his brother's house and headed towards PriyadarshiniPark.

Media vans started following him amidst the traffic.

His car then took a left turn towards Breach Candy Hospital road.

Towards the end of this road is Silver Oak Estate.

Sitting on the back seat, Ajit was engrossed in his mobile or at least was pretending to do so to avoid the media glare.

As Ajit crossed the park ahead of Breach Candy hospital, his car took a U-turn and then a right from the barricaded gates of Silver Oak Estate.

Ajit hurriedly got out of the car and headed to the front gate.

He turned around as someone called him from behind: 'Mama, ikde.. (Uncle, this way!)'

Ajit ran up the stairs and entered the house, with the door swiftly closed behind him.

After an 80-hour rebellion, Ajit Pawar was back home. 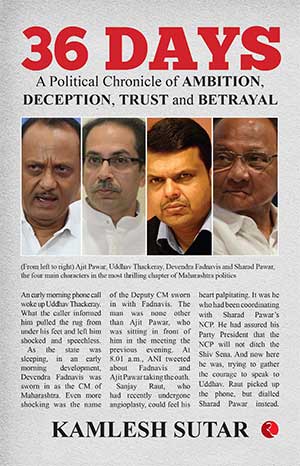 Excerpted from 36 Days: A Political Chronicle Of Ambition, Deception, Trust And Betrayal by Kamlesh Sutar, with the kind permission of the publishers, Rupa Publications India. 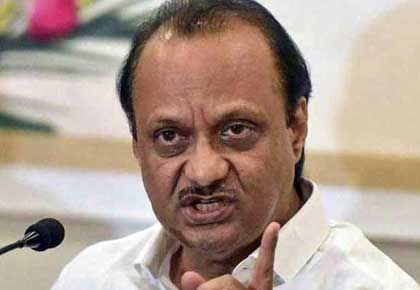