The secretary defence production wants to make India (currently the largest importer of weaponry) one of the world's top five defence manufacturers and a global leader in artificial intelligence and cyberspace.
Ajai Shukla reports. 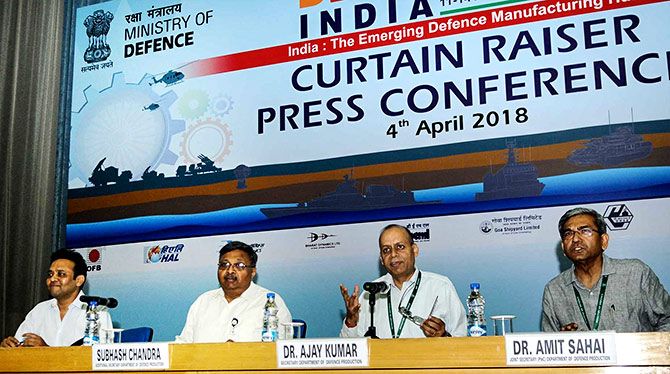 If anything, the targets it sets are too modest, he says.

Since March 30, the ministry has been evaluating several hundred responses that stakeholders submitted in response to the draft DPrP-2018.

Once that process is complete, the new policy will be notified, the defence ministry told Parliament on Monday, August 6.

They include making India (currently the largest importer of weaponry) one of the world's top five defence manufacturers and a global leader in artificial intelligence and cyberspace.

The policy aims to achieve self-reliance by 2025 in several weapon systems, including helicopters, fighters, warships, tanks and missiles; raising defence exports to $5 billion annually by 2025, and producing defence goods and services worth Rs $26 billion by that year to create employment for 2 to 3 million people.

"The targets set in the DPrP are actually under-ambitious. The indigenous defence industry currently has a turnover of about Rs 700 billion. Raising this to Rs 1.7 trillion by 2025 would require a CAGR (compounded annual growth rate) of just 13.5 per cent. That is achievable," Dr Kumar told this correspondent.

The secretary DP's optimism is understandable: His last assignment was in the ministry of electronics and information technology, where he oversaw a phenomenal domestic manufacturing expansion.

"Similarly, television manufacture has grown at 40 per cent year-on-year."

Although DPrP-2018 aims to indigenise key weapon systems by 2025, Dr Kumar accepted that arms import will continue, albeit on a reduced scale.

But, alongside imports, he said a growing share of defence manufacture would be exported to buyer countries.

"Even if the Indian military buys only Rs 1 trillion worth of defence equipment of the Rs 1.7 trillion we will produce in 2025, the remainder can be exported -- and the export market is huge. Building large volumes for export will generate economy of scale, making our defence products cheap and attractive," said Dr Kumar.

When reminded that all our current defence exports are of second-rung weaponry, rather than state-of-the-art platforms, the secretary, DP, said, "That is because we have mistakenly followed the route of manufacturing with "transfer of technology" from foreign vendors, and no vendor transfers state-of-the-art defence technology. Since our weaponry does not incorporate the latest technology, it cannot compete in the global markets. We have to, therefore, embrace research and development and start building and exporting front-line equipment."

"Indian firms can compete in the global defence market. Just 8 to 10 countries dominate the defence industry. But there are 190 countries in the world, and they are all potential customers. Not all of them insist on high-end weaponry," he said.

Dr Kumar pointed out that China is amongst the world's top five defence exporters, having captured large market shares in the less developed 190 countries.

According to the Stockholm International Peace Research Institute, China has sold arms to 48 countries, capturing a $6 billion share of the $100 billion dollar global arms trade.

"Companies like CISCO, United Technologies, IBM and Honeywell have their biggest, or second-biggest, design and development centres in India, which compete with R&D centres in their home countries," he said.

"R&D is a fast-growing industry in India. We have birthed about 10 to 12 unicorns (privately held start-ups that are worth over a billion dollars) in the last decade," Dr Kumar said.

In a brave admission, the secretary DP agreed that defence public sector undertakings presented a culture challenge in scaling up production.

"Every decision in a DPSU is a protracted process that consumes time. The rules provide managers with limited flexibility to make quick decisions. Our challenge is: How to galvanise growth in a PSU-dominated environment?" he added.