China's and India's nuclear doctrines mandate 'No First Use' of nuclear weapons, so use against each other seems unlikely.
Ajai Shukla reports from Hyderabad on how Agni-5 was built. 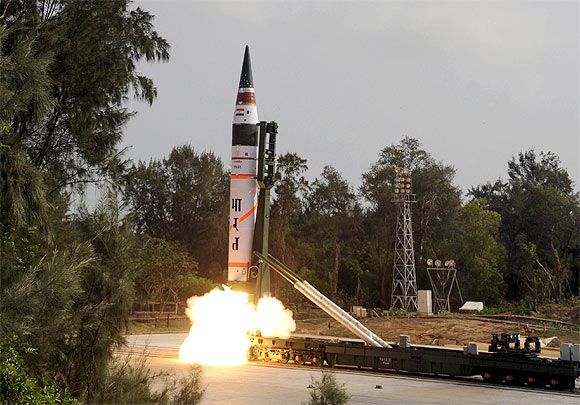 The missile's payload splashed down 20 minutes after launch, precisely on target in the Southern Indian Ocean.

'All the radars, tracking systems and Range Stations tracked and monitored the flight performance and all the mission objectives were successfully met,' announced the defence ministry.

Prime Minister Narendra Modi and Defence Minister Manohar Parrikar tweeted their congratulations after the test. 'It will add tremendous strength to our strategic defence,' said the PM.

This is the fourth successive Agni-5 test launch that has gone to plan since the first launch on April 19, 2012.

Monday's test was the second in full operational mode, with the missile launched from its storage canister.

The road-mobile canister protects the deployed missiles, allowing them to be stored for years.

Yet, it permits launch in minutes, including the time needed for mating the nuclear warhead (stored separately) with the missile.

Agni-5 is now ready to enter service with the Strategic Forces Command (SFC) as the backbone of India's China-specific nuclear deterrent.

Its 5,000-kilometre range allows it to deliver a nuclear payload anywhere in China.

In 1998, soon after India's five nuclear tests, the defence minister of that time, George Fernandes, stated that China was 'Potential threat number one.'

Even so, the Defence R&D Organisation (DRDO) is developing a modernised, short-range ballistic missile, the Agni-1P, whose range of 300-700 kilometres will make it the backbone of the Pakistan-focused nuclear deterrent.

Both China's and India's nuclear doctrines mandate 'No First Use' (NFU) of nuclear weapons, so use against each other seems unlikely.

Pakistan, however, retains the option to use nuclear weapons in grave national security crises, and is building an arsenal of tactical nuclear weapons that it insists it would use early in a war with India.

To understand the ultra-modern Agni-5, Business Standard visited the Advanced Systems Laboratory (ASL) in Hyderabad, the DRDO facility that has designed, developed and built all India's Prithvi and Agni ballistic missiles.

Ballistic missiles work on the same principle as lobbing a stone at a target.

The impetus and direction imparted while throwing the stone (or launching the missile) determines where they will land.

The launch starts with the 'boost phase', when the missile is propelled into space.

A powerful gas generation system in the canister rapidly builds up 300 tonnes of pressure, popping the missile out, like a bullet.

In less than half a second, when the missile is 10 to 15 metres above the canister, the first stage ignites, accelerating the missile upwards.

Within 30 seconds, it goes supersonic and, within 90 seconds, when the first stage burns out, Agni-5 is hurtling upwards at one-and-a-half kilometres each second.

Designing and validating the canister was a key challenge, which was tackled after the first two Agni-5s were launched from open launch pads.

This involved conducting two 'pop-up tests' (technically 'ejection tests'), in which a dummy missile was ejected from the canister to test the gas generation and the command to ignite the first stage.

Then, in a landmark test on January 31, 2015, a fully operational Agni-5 was launched from a canister. Monday's launch is the fourth validation of the canister, and the missile as a whole.

While Agni-5's first stage is built from conventional 'maraging steel', the second and third stages are built from lightweight, new-age composite materials.

With all three propulsion stages separated, all that is left is the payload -- the tip of the missile.

With the 'boost phase' over, the missile enters its 'ballistic phase.'

Like a lobbed stone, it is carried towards the target purely on momentum.

Ten minutes after launch, it reaches the top of its parabolic path, about 580 kilometres above earth.

Then gravity begins pulling it down towards the impact point.

Deep in space here, with no atmosphere to allow aerodynamic steering with fins, course correction is done with small 'side-thruster rockets', to correct any errors that crept in during the launch.

By the time the payload reaches the upper edge of the atmosphere, it is hurtling downwards at about 5 to 6 kilometres per second.

This is the most technologically challenging part of the launch -- the re-entry stage.

This is done by building the re-entry vehicle from a thick block of carbon composite material, compressing it with pressures of up to 1,000 atmospheres.

"A diamond is created when 10,000 atmospheres of pressure are exerted on carbon. So we are effectively creating one-tenth of a diamond," quips one of the scientists.

At the target end, in the stretch of ocean between the southern tips of Africa and Australia, radar-equipped naval warships are pre-positioned to monitor where the missile strikes.

There is no scope for error beyond a few hundred metres.

Manufacturing the Agni-4 and Agni-5 at full-scale production rates will include more than 200 private sector industries, many of which have played roles in developing the missiles.

DRDO itself manufactures key components, like rocket motors; but even for those, private firms build components like casings and nozzles.

As they gain experience, a band of low profile, high-tech private firms, like Sigma Micro Systems, VEM Technologies, and Resin Allied and Products are emerging as players in the missile field.