'My biggest worry is electricity'

'The worst affected is the electricity supply.'
'Some 6,000 to 8,000 poles have been damaged completely.' It has probably been the most extraordinary 72 hours of Raigad District Collector Nidhi Chaudhari's recent life.

"I have not slept for three days," she tells Rediff.com's Vaihayasi Pande Daniel, the tiredness in her voice evidence of it.

It all began with two phone calls and a series of WhatsApp messages.

The calls were from Mumbai, from both the Maharashtra chief minister's office as well as the office of the state chief secretary, around midnight of June 1.

The messages came on the Maharashtra district magistrate group.

They informed her about the imminent arrival of a cyclone -- Nisarga.

Nisarga means: To let something go.

Late June 1, this cyclone was already looming large, far in the distance, but upgrading rapidly, as it grew out of a depression in the Arabian sea.

The calls directed her to prepare well for Nisarga. "Their guidance was crucial."o;

Little did Chaudhari -- an IAS officer -- know, at that time, the kind of instant havoc Nisarga would create in her already overburdened schedule, made chaotic by her district's ongoing fight against COVID-19.

After that, till Friday, it has been a mad scramble for her, and her Raigad team, to first, shut down all parts of Raigad, push the district's population, of 26.3 lakhs (as per the 2011 Census), 63 per cent of which is rural*, indoors, or move them to safer ground, as the cyclone bore down on the coast, proving to be the worst for this area since 1891.

And then post-cyclone, to get it up and running again, as quickly as possible.

After the June 1 late night call, Chaudhari swiftly swung into action and gave rapid instructions for all the administration officials to fan out in every direction to warn people of the cyclone and make certain preparations were in order.

She herself took off for all the coastal villages between Alibag and Murud.

The instructions were very precise:

"Although we didn't get much time because only on the 1st midnight we got the information. From then onwards we were in the field, making people aware from gully to gully -- every gully we went and checked. And NDRF (National Disaster Response Force) teams went too.

"Administrative officers went inside (homes) and told them: 'These iron sheets may fall, these iron sheets outside your house or this loose material may blow away and hurt someone. So, keep every such thing in a proper shelter'.

"Even people were evacuated in big, big numbers. Some 15,000 people were brought into shelters.

"But much more than that were evacuated and told to move. They themselves wanted to go, saying: 'We have a relative in the village, whose house is a little farther from coastline and whose house is pucca'. So, such kind of evacuation also happened."

She says it was a two-pronged strategy. Evacuation, and getting people to voluntarily move.

"We didn't have much time. We got very little time. We told people that a house with pucca RCC roof structure is what is safe. Even for G-plus-one (ground plus one) structures we told all people that during the cyclone period, for six hours, they should remain in the ground floor only, because the top floor may get damaged through tree fall etc. And they would still have the protection from the tree of one floor and RCC roof.

"That was the way we could create awareness. There were extensive loudspeaker announcements. In every village notice boards were made."

At the district headquarters major planning and groundwork was being done.

"We set up a control room here (in Alibag). Every gram panchayat, every sarpanch, every talati (village official), every village level officer was spoken to. We told them what is to be done during a cyclone.

"To ensure that everybody in the line of cyclonic eye must be evacuated from the shoreline and brought under a shelter which is RCC at least. Some property losses are very likely, but we wanted to save lives."

And then there were the many vital lessons about cyclones that needed to be imparted too.

Cyclones are not usually punctual. Nor do they bother to keep to schedule. Actually, not surprisingly, they are fairly unruly too and don't even follow a predicted path.

Nisarga was meant, initially, as per Indian Meteorological Department updates, to make landfall at 6 am, June 3, near Alibag, a northern municipal council town.

It finally showed up at 12.30-1 pm near coastal Shrivardhan, in the southernmost part of Raigad district.

It is the disparity between ETA and the actual arrival time that can be lethal, Choudhari explains. "I have been making appeals to people all through, once it started. And before that we started making appeals about what period of time (around a cyclone's arrival and departure) is essential.

"Why a cyclonic lull should not be misunderstood. There is a lull that gets created. Many a time the tragedy is during that time, because people move out to see whether the shore is silent.

"Then we imposed Section 144 also. The curfew helped us so that nobody could come out and people didn't think of venturing out. Otherwise people venture out everywhere and then suddenly the cyclone comes in and then, for us, also, at that point of time, to tell them to go inside becomes very difficult."

When Nisarga slammed into the north Maharashtra coast between Murud and Shrivardhan, post noon June 3, it smashed everything in its path.

Any tin sheets, that had not been secured, flew away. As did the heavier cement sheet roofing.

"The cyclone was pretty strong. Come and witness for yourself how many big banyan trees have fallen. Large-sized trees for which, I don't know how many megawatts of power would have been required to otherwise make them fall.

"We received a tremendous force. It was definitely not as bad as Amphan (that hit West Bengal and Odisha last month) but any speed above 120 kmph is very terrible. We received 120 kmph and in some places it went up to 140 kmph. It stayed with us for six hours."

The six hours it raged for were calamitous.

The post cyclone landscape that Choudhari began to view on the evening of June 3 was not pretty.

"It is very bad in a few talukas where the landfall was direct. Shrivardhan, Murud were very badly hit. Lots of damage due to the tin sheds and the cement sheds having fallen or being blown away. The signs of damage were everywhere in Shrivardhan.

She says all major roads have been cleared and they are now getting to the internal village roads also. In 12 hours, the debris on key roads, up to Shrivardan, had been cleaned up and all the tehsils were connected. Only Shrivardhan area is left. Volunteers are helping everywhere.

"Damage to houses in rural areas is immense. Immense. All kachha homes were blown away, especially in Murud and Shrivardhan. Even interior homes (away from the shore), because the cyclone came at a speed of 120 kmph, a devastating power which reduced afterwards. It was very, very damaging in the coastal areas. But even in the internally, in interior areas like Mangaon, Mhasla, the damage is huge."

"It went across my district. Full. Entire. It has swept the district, especially southern Raigad. Mangaon, Mhasla and Thal -- these places were badly affected too. Worst affected are Shrivardhan and Murud,

"Fortunately, along the coastline (north), due to tourism and all, most of the houses are pucca -- so their damage was a roof, doors, windows. But not the house per se, because being made of stone (or cement). Houses in this remaining part of Raigad, only a roof may be damaged. That's also a big damage, so there is no denial that the entire district, in some way or the other, has been affected."

As of June 5, Raigad is still far from normal, given that only one small area has got electricity.

Chaudhari: "The worst affected is the electricity supply. A huge number of poles, some 6,000 to 8,000 poles have been damaged completely. That will take a lot of time for restoration. We would need teams from other districts also.

"My biggest worry is electricity. Relief for houses, relief for people, everything we may be able to provide. We will try our best to do it at the earliest possible. But electricity -- a big problem."

She can only offer tentative estimates on when the electric supply will be back.

"It all would depend on the additional support that we require. There is generally a panel of contractors available with the MSEB (Maharashtra State Electricity Board).

"If we don't get (assistance) it may take 30 days' time. If we get good teams and good contractors, who are keen on getting the work done on time, then it can be done in seven days. It is quite possible if everybody works towards this."

Alibag town got its electricity back on Thursday, although there is the occasional tripping happening. Nearby areas like Mandwa, Rewas, Kihim etc, she says should be up within two days with the help of "good teams" because there hasn't been sub-station damage.

"At least in the district headquarters we have been able to restore electricity yesterday (Thursday). In two tehsils -- Uran and Panvel -- 80 per cent of the electricity restoration is complete. Srivardhan, Murud are going to take more time."

Cell phone connectivity is also an issue, though less critical.

Relatives of many of the villagers/residents of Shrivardhan and Murud, who live abroad, are frantic with worry about their families, with whom they have lost touch.

"Let me tell you: The very reason I told you to call on WhatsApp is because my own number is on WiFi right now. Or you would not have been able to get me."

As a tip she suggests that people opt for manual select of a network.

On Friday, Chief Minister Uddhav Thackeray arrived. He came to the RoRo jetty at Mandwa by boat and drove to Thal, near Kihim. 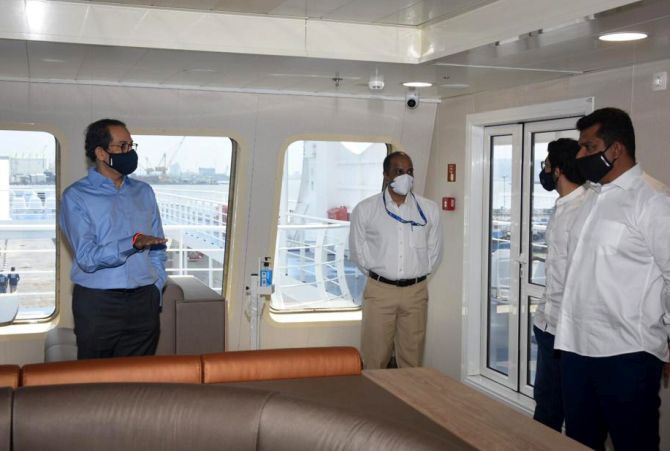 Says Chaudhari: "Today when the honourable CM came he said he would be taking a review of electricity restoration soon. I personally have to report back to him.

"The CM was not here for inspection of damage and all. He wanted to come and encourage us. And appreciate the efforts that had been made by administration."

Thackeray visited the village panchayat of Thal, where serious crop losses had taken place and houses had been damaged. And then he visited the district HQ at Alibag.

In the aftermath of the cyclone, Chaudhari -- who has not slept for three days -- has already spent time visiting other parts of Alibag, Roha, Mangaon, Mhasla, Shrivardhan.

While, at the moment, the electricity issues look somewhat insurmountable, unless outside teams arrive quickly, Chaudhari is deeply relieved that their efforts in shutting the district, before Nisarga finally popped its head, resulted in a slender death count.

She adds sadly: "Even all the deaths were deaths which could have been avoided. Like of the man who went out during a lull period to check his shop and then an electricity pole hit him."

On a more positive note, she also adds: "We really want to bring back the pre-cyclone Raigad again. The monsoon period is creating further hurdles, even in electricity restoration, network restoration. Had it been a non-monsoon period, we would have been able to perform much better.;

Keeping her ultimate aim of building back a New Raigad in mind, Chaudhari is off this weekend to tour the rest of the district. 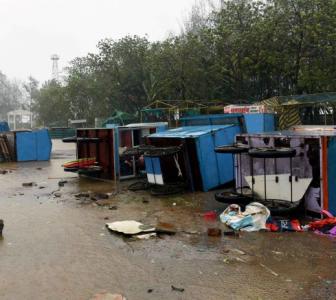