A Son's Pilgrimage For A Warrior Father

Hriiyio was only 6 months old when his father, a soldier in the 1 Naga Battalion, met a warrior's death in Drass. "It was a dream come true," he told Rediff.com's Archana Masih.

Twenty-three years after his father sacrificed his life for the nation, his only child Ashuli Hriiyio finally made the first visit to the Kargil War memorial.

The memorial honours the brave men killed in action in the Kargil War, 1999.

The Indian Army arranged for the 10-day trip from Manipur to Drass and took care of his boarding, lodging and travel expense. The journey took him from the eastern edge of this vast country to the northern tip. A soldier was deputed to accompany him throughout the journey.

Hriiyio travelled from his village near Imphal to Dimapur in the neighbouring state of Nagaland and boarded a train to Delhi. From Delhi he travelled to Jammu and was put up in an army camp for a couple of days. The last leg of the journey to Drass was done by road.

"My dream has been fulfilled," he says over the phone from Drass on July 26. Hriiyio was only 6 months old when his father, a soldier in the 1 Naga Battalion, met a warrior's death in Drass.

This visit, his first to J&K and Ladakh, was like a pilgrimage.

His mother had once made the trip to Drass before she passed away when Hriiyo was 13.

He has a photograph of her by a Ladakh tourism board in Drass. Hriiyio spotted the same board in Drass and stopped to take a similar picture in his departed mother's memory.

"I will put both our pictures side by side in a frame," he said. 1 Naga was the first battalion to be inducted into the battles of Kargil.

The citation under Sepoy K Ashuli's picture at the memorial carries the account of his valour during the assault on Black Tooth.

A rope had to be fixed on the cliff. Unmindful of his safety, K Ashuli clung on to the cracks in the cliff face and slowly inched his way up braving enemy fire.

In the action, he was grievously injured and later succumbed to his injuries. 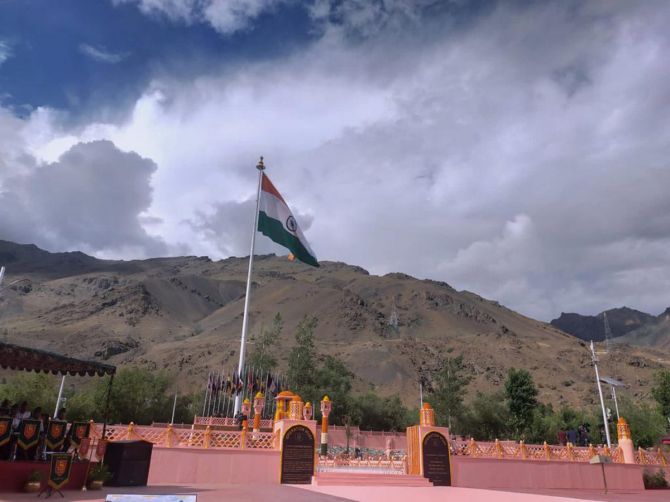 "I am so happy that I could pay homage and read his name among the brave men of India. Once I entered the gates, I was only searching for his name. I did not stop till I found it," says Hriiyio.

He also attended a briefing on Operation Vijay given to all guests and attendees by soldiers of the Madras Regiment.

At a function, he received a memento from Mrs Sunita Devi, wife of Northern Army Commander Lieutenant General Upendra Dwivedi. The Northern Command is responsible for guarding the Line of Control and the China border. It is the Indian Army's most crucial area of responsibility.

A traditional Bada Khana [feast] was laid out for the next of kin and guests. Among the families of heroes who had come to pay homage, he met the parents of Captain Clifford Nongrum, Mahavir Chakra, killed in action in Drass.

Mrs Sally and Peter Nongrum had travelled from Shillong. Their son is the highest decorated military officer from Meghalaya. 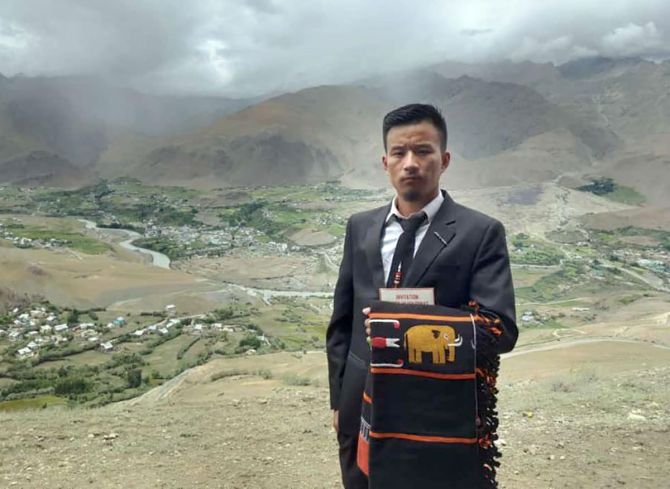 Hriiyio at the Lamochan view point with Drass in the background.

The shawl is a symbol of the Mao Naga tribe that he belongs to.

The Nagas are fierce warriors. 1 Naga received the Battle Honour for Drass in the Kargil War.

Battle Honours are given to units that have taken active and pivotal roles in wartime.

"It was a feeling of great pride and honour that the nation remembers the sacrifice of my father and has not forgotten his role in protecting the Tricolour," said Hriiyio who feels the youth should join the armed forces.

"There is no other greater service than serving one's motherland."