A Reason to Smile

There are almost 1 million people in India with a cleft palate or cleft lip who have not received any treatment to remedy their condition.
Every year, almost 35,000 infants are born with cleft lip and palate, reports Geetanjali Krishna. 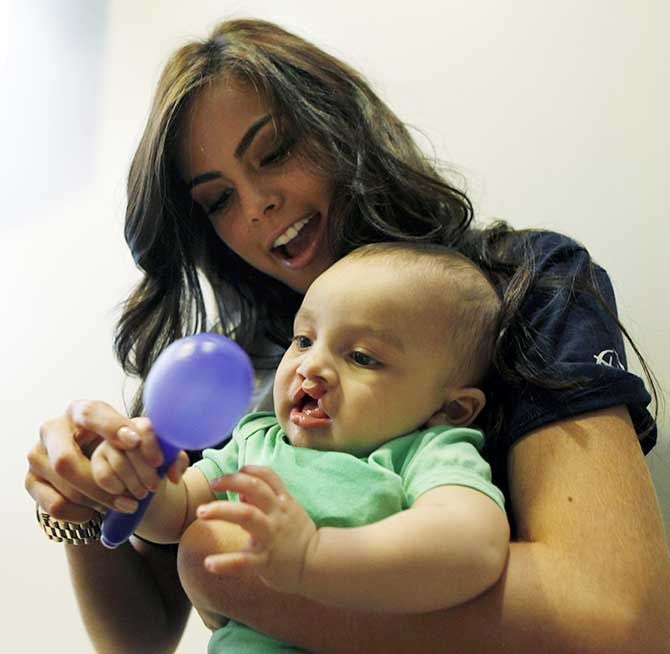 *IMAGE: Miss Universe 2010 Ximena Navarrete plays with a child with a cleft lip at a hospital during an Operation Smile event in Sao Paulo, Brazil. Photograph: Paulo Whitaker/Reuters

Some believe it's a sign of bad luck or bad karma.

Others believe that it is caused when a pregnant woman is exposed to an eclipse.

A recent conversation with Pankaj Raisingh Dodhia from Gujarat's Dahod district made me realise that the biggest problem with the condition of cleft palate/lip is the lack of awareness about it.

"When my daughter Mital was born, we had no idea what was wrong with her, let alone how to help her," he told me.

The newborn had a split in her upper lip, she was unable to be breastfed.

The midwife who attended to the home birth hadn't a clue; neither did family elders who hadn't seen anything like that before.

The distraught couple didn't even think of consulting a doctor for what they mutely accepted as their daughter's unfortunate deformity.

Estimates suggest that in India, there are almost 1 million people with cleft palate or cleft lip who have not received any treatment to remedy their condition.

Every year, almost 35,000 infants are born with cleft lip and palate.

Many of them face difficulty in breathing and speaking and newborns, like Mital, inevitably are unable to be breastfed.

Sadly, the lack of awareness and superstitions surrounding the condition disfigure the lives of people with cleft lips or palates even more than their condition does.

"We would look at her innocent face and wonder if she was paying for the sins of an ancestor," said Dodhia.

"Although she was luckily able to eat and speak normally as she became older, we used to worry about what was to become of her."

An alert teacher suggested to her parents that they could seek medical help to correct her condition.

The Dodhias found that surgery and subsequent follow ups with plastic surgeons, orthodontists, pediatricians and even speech therapists could actually correct her cleft lip.

However, it could cost upwards of Rs 45,000 for the initial surgery alone -- money that Dodhia, a farmer with limited means, could ill afford.

Mital's teacher suggested they look out for free surgical camps instead.

Dodhia managed to connect with the Muthoot Pappachan Foundation-funded Mission Smile, a Mumbai-based NGO that promotes awareness about cleft lip/palate and organises free surgical camps where screened patients are treated.

A camp from January 19-23, 2020 had been scheduled in partnership with Vadodara's Isha Hospital.

Mital was evaluated and found to be a suitable candidate for surgery.

When I spoke to Dodhia, his daughter was recovering from the operation.

Doctors had assured him that it had been successful.

"We are immeasurably grateful and relieved because finally Mital has the chance to live a normal life," he told me.

The Mission Smile camp has performed as many as 60 corrective surgeries.

While 60 lives have undoubtedly been transformed, the fact remains that as long as a killer combination of superstition and ignorance continues to shroud this condition, there will be many Mitals who will not benefit from corrective surgery in time.

As Dodhia said in parting to me: "If Mital's teacher had not made us realise that her cleft lip could be medically repaired, we also might have gone through life never knowing anything could be done about it.".

Instead, they now have a reason to smile. 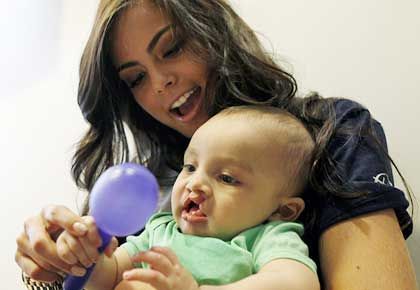