'If the museum in his memory inspires and instils among Brahminical British Indians an attitude of equality towards Dalits, the edifice would be worth it,' reports Ashis Ray.
Illustration: Uttam Ghosh/Rediff.com The uncertainty over whether a museum would exist in London in the name of Bhimrao Ramji Ambedkar, architect of the Indian Constitution and strenuous campaigner for Dalit rights and education for women, was quashed recently.

The proposed institution was prematurely inaugurated in 2015 by Narendra Damodardas Modi, after the Maharashtra government paid 3 million pounds to acquire a townhouse in the leafy, intellectual suburb of Primrose Hill, where Dr Ambedkar lived in 1921-1922 while reading at the London School of Economics and preparing to be called to the bar at Gray's Inn.

Indeed, Jenrick, with a little encouragement from a British foreign office anxious not to ruffle relations with India, overruled an objection by the Camden borough council.

It was an issue of granting planning permission to convert use of a residential property in a soundless locality for a potentially noisy public purpose, such as a museum.

The Indian high commission's application for retrospective sanction had previously been rejected.

At a hearing on the matter last year, Camden's Conservation Officer Nick Baxter argued that Dr Ambedkar was not a significant figure in Britain and had lived in the house for only a year, thereby not justifying a violation of planning rules.

Caroline Daly, also of the council, maintained that every house lost in the borough through conversion or redevelopment is a 'home that needs to be replaced'.

To these, Steve Gasztowicz, a queen's counsel appearing for the Maharashtra government, described Dr Ambedkar as a 'God-like' personality, who mattered to Indian-origin people in the United Kingdom.

Jenrick's award, though, recognising neighbourhood sensitivities, was conditional and in-principle.

It mandated that Ambedkar House -- as the building has been named -- would operate solely under the supervision of the Maharashtra government, its opening hours will not exceed 11 am to 5 pm and a museum management plan would need to be submitted to the Camden council for approval.

There have been stories of unseemly wrangling for control and unmonitored expenditure since the property was purchased.

Another 3 million pounds was, reportedly, spent on its refurbishment.

B R Ambedkar was born on April 14, 1891 at the military cantonment of Mhow into the Mahar caste, looked upon by Indian society of that milieu and by the British, who ruled India, as 'untouchables'.

The family hailed from Maharashtra.

His father Ramji Maloji Sakpal had, however, become an officer in the British Indian Army and was, thus, fortunate to have his son educated.

Indeed, Ambedkar junior was the first in his community to complete high school.

Yet, he experienced unspeakable oppression.

'While in the school I knew that children of the touchable classes, when they felt thirsty, could go out to the water tap, open it, and quench their thirst. But my position was separate,' he later wrote.

'I could not touch the tap; and unless it was opened by a touchable, it was not possible for me to quench my thirst,' he recalled. These reminiscences were published in a booklet, Waiting for a Visa.

A bright student, he proceeded to obtain a bachelor's degree in economics and politics at Bombay University.

Coincidentally, here he met the reformist maharaja of Baroda, Sayajirao Gaekwad III, who granted him a scholarship of 11.50 pounds a month for three years for further education at New York's Columbia University, where he received a master's degree and a PhD.

He lived in a dormitory with a friend, Naval Bhathena, a Parsi; they remained friends for life.

Others he considered to be close to him were his professors John Dewey, James Shotwell, Edwin Seligman and James Robinson, who were refreshingly uncaring of his caste status.

After three years in America, he arrived in London in 1916.

The British police suspected he was a revolutionary and frisked him minutely before allowing him entry.

Luckily, letters of introduction from his professors proved invaluable.

He enrolled at Gray's Inn to become a barrister; and the London School of Economics for a doctoral thesis, which was eventually published as The Evolution of Provincial Finance in British India. 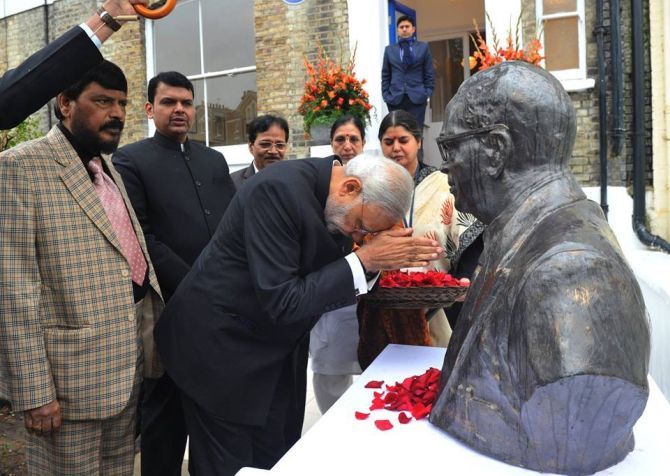 But Dr Ambedkar's scholarship from Baroda had run its course.

Therefore, in 1917 he returned to India, after being given permission to come back to London to finish his studies within four years.

He became professor of political economy at Sydenham College in Bombay, where he was popular with his students, but some of his colleagues objected to his sharing their drinking water jug.

It was a culture shock after his experience of equity in the US and London.

Unsurprisingly, in 1919, he gave evidence to a British committee advocating separate and reserved seats in elections for scheduled castes.

In 1920, he returned to London to finish his training at Gray's Inn and his work at the LSE -- where a bust of him has now been installed -- helped by loans from Bhathena and the maharaja of Kolhapur.

In 1924, he began practice as a barrister in Bombay.

Dr Ambedkar, who was conferred the Bharat Ratna by the government of then prime minister Vishwanath Pratap Singh, was undoubtedly a nationalist; but he frequently collided with the Indian National Congress.

After the British government ordered separate electorates for 'untouchables', Mahatma Gandhi, vehemently opposed to a division in the Hindu vote, commenced a fast unto death.

Dr Ambedkar backed down. But he interpreted Gandhi's outreach to scheduled castes, whom the latter described as 'Harijan' or children of God, as patronising.

At the 1931 Roundtable Conference in London, where Ambedkar was invited as a representative of Dalits, Gandhi lashed out: 'All parties at this meeting represent sectional interests. Congress alone claims to represent the whole of India, all interests. It is no communal organisation; it is a determined enemy of communalism in any shape or form. Congress knows no distinction of race, colour or creed; its platform is universal.'

Dr Ambedkar, who converted to Buddhism, contended that Hindus should concede Pakistan to Muslims.

This was at odds with Gandhi's view, but in consonance with the Congress's acceptance of the Partition of India. 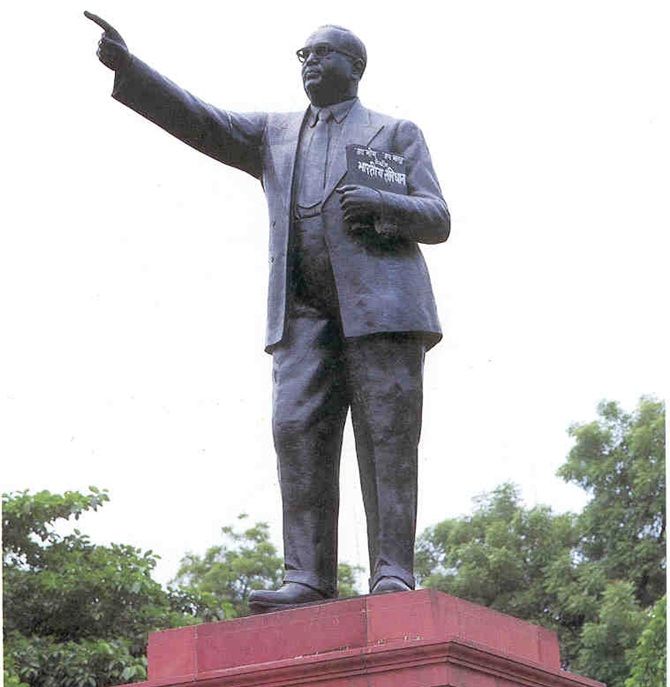 IMAGE: A statue of Dr B R Ambedkar, the architect of India's Constitution and first law minister.

The Constituent Assembly appointed him chairman of the drafting committee for the Constitution of the Indian Republic, which came into being on January 26, 1950.

While he was, arguably, giving shape to Nehru's vision of an independent India, he edited and clarified content as well as defended certain formulations in debates in the Assembly.

Notwithstanding his insertion of the abolition of untouchability, he echoed Nehru's view of India as a liberal democracy, with a federal structure and safeguards for rights of minorities.

It is generally accepted that Dr Ambedkar resigned his ministerial position in 1951 because the Congress refused to implement a uniform civil code.

He was, however, pleased with his efforts to create the Constitution.

He was confident to the extent of asserting: 'I feel that the Constitution is workable; it is flexible and it is strong enough to hold the country together both in peace time and in war time.'

'Indeed, if I may say so, if things go wrong under the new Constitution the reason will not be that we had a bad Constitution. What we will have to say is that Man was vile.'

They complain of discrimination from upper caste people of Indian origin, especially in rigid Gujarati and Punjabi circles.

In 2015, under the government of then prime minister David Cameron, the House of Lords discussed 'amendment of Section 9 of the Equality Act 2010 that requires the introduction of secondary legislation to incorporate caste as a protected characteristic;'.

This followed a judgement in an employment case relating to caste discrimination.

Dolar Popat, who is of Indian descent, reacted: 'My Lords, the vast majority of the British Hindu and Sikh community is outraged at this amendment to the Equality Act.'

Meghnad Desai, also of Indian extraction, asked: 'My Lords, is not the problem that the majority of Hindu and Sikh organisations is responsible for the discrimination of the minority in their own ethnic origin community?'

Shreela Flather, a grand-daughter of Ganga Ram Agrawal (after whom a hospital is named in Delhi), intervened: 'My Lords, the Hindu community says that there is no caste discrimination in this country and therefore we do not need this subsection. Fine -- but if that is the case, why is it fighting so hard against it? ... But because they are fighting so hard, it leads me to believe that there is discrimination.' 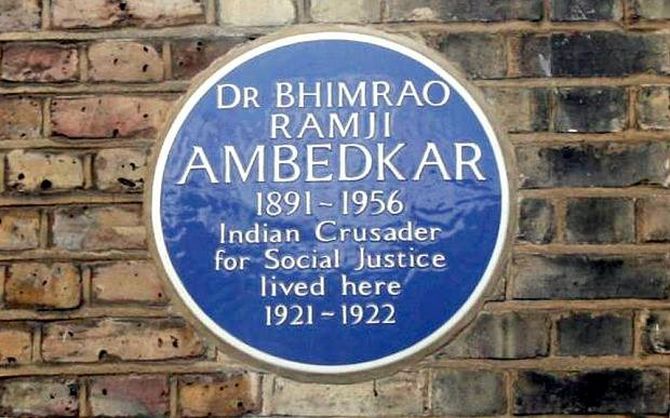 In the House of Commons in 2018, Bob Blackman, who represents a constituency that has a decisive percentage of Gujarati-origin voters, put the question to Penny Mordaunt, a minister in the government of then prime minister Theresa May, as to when 'she will respond to the long-awaited consultation on removing caste from the Equality Act 2010'.

Mordaunt replied: 'I hope to make an announcement on this in the coming weeks.'

Opponents of the specific inclusion of casteism in the UK's equality framework dubiously plead that such enactment is 'part of a wider campaign to interfere in India's internal affairs'.

The Indian high commission subscribes to this unempirical stance.

The Camden borough was correct in contending that Dr Ambedkar was not so well known in Britain.

The best known and most revered among Indian politicians are Gandhi and Nehru.

Now, in this digital age Modi is pummelled 24x7 into the consciousness of overseas Indians but does not elicit respect among progressive elements and has certainly earned the wrath of mainstream British media.

But if the museum in his memory inspires and instils among Brahminical British Indians an attitude of equality towards Dalits, the edifice would be worth it.