'An obsequious man, wearing a bright turquoise Nehru jacket over his kurta-pajamas, hovers behind Lalu attending to his needs.'
'The needs mainly consist of providing him with sips of mineral water and, after drinking, mopping the folds of Lalu's leathery chin with a towelette, that sports the large label of Roman Baths.'
'Periodically, there is a rumpus when Lalu gets up from his chair and leaves the room to rinse his mouth outside the door, through the grill into the bushes.'
'A handful of Lalu followers/relatives scurry after him to help him complete this recurring ablution.'
Vaihayasi Pande Daniel -- who covers the Sheena Bora murder trial for Rediff.com -- reports on a day in a Ranchi court.

Bihar's former chief minister sits in a rickety wooden chair, in the last row of Courtroom 4, waiting nearly two hours, for the judge.

His face, puffed, the skin soft and unhealthy, offers a map of his life.

Its lines and furrows reflect his long journey, with the unexpected hairpin bends, from poverty to prosperity -- success and back to despair. And to disgrace.

Barely a ghost of a smile creases the now sick, bloated, face of the man, who once often had the nation in splits of laughter with his earthy humour and sharp Bihari realism.

It has taken Lalu Prasad Yadav 69 years to travel the 500 odd km between Phulwariya, Gopalganj, north Bihar and Ranchi, Jharkhand, from his birthplace to this venue of his nemesis.

And he may never travel much further beyond Ranchi or Jharkhand again. As the portly Lalu, the man who would be prime minister but is now Quaidi No 3351, sits in his humble kursi (chair), wearing a green checked kurta teamed with white pajamas, an argyle maroon and light blue cardigan, a gold ring with a dark stone, and black-and-white sports shoes, waiting for the delayed CBI Special Judge Shivpal Singh, he is not impatient.

A pale shadow of the lively, gaudy politician he once upon was.

The Rashtriya Janata Dal president's appearance in a Ranchi court in the massive Bihar fodder scam (called Chara Gotala) case is part of a string of appearances he has to make ever since the Supreme Court directed in May 2017 that he would be tried separately for each case over a nine-month period.

October 3, 2013, he was sentenced to five years of rigorous imprisonment and fined Rs 25 lakhs in the first fodder scam by the Ranchi Special CBI court.

On December 23 2017 he was found guilty in the second fodder scam at Deogarh, near Jamshedpur, and was sentenced, receiving a three-and-a-half year sentence on January 6, 2018.

On January 24, he was sentenced to five years in prison in a third fodder scam case.

On March 24, he was sentenced to 14 years in prison and fined Rs 60 lakh in the fourth fodder scam case.

Local pundits say if Lalu -- who is currently being treated in a Delhi hospital for medical issues so severe that he could not be flown to the capital from Ranchi and had to be taken by train -- dies in prison, the RJD will rule Bihar next election.

Lalu -- who turns 70 on June 11 -- still faces one more case. Hearings are on for alleged embezzlement from the treasury at Doranda, Ranchi. His anxious supporters, who swarm about him in the courtroom on January 29, are indignant that their faded dear leader is being made to wait.

Lawyers -- some of them sporting ski caps against Ranchi's 9 degrees C temperatures -- badger the court clerks, asking where the judge is.

One of them, who wears a woollen hat that says Enact on it, approaches the bench to talk to the court personnel seated at a higher platform, behind a draped red government cloth, next to the empty judge's chair.

They ask that the judge be called -- "Aaye hue hai, phone kiya jay? (He -- meaning Lalu -- has arrived, shouldn't a phone call be made?)"

His assistant, an older grey-haired advocate in striped pants and a black jacket, is keeping the show going, moving, in dual mode, between the large Yadav party in the back and the clerks in front, alternately pacifying backwards and raising ire forwards.

The RJD boss -- whose Web site describes him as 'The darling of the masses' and who was the youngest MP to be elected in his day to the Lok Sabha in 1977 at the age of 29 -- from time to time, in his singsong Bhojpuri accent, adds a few words to the general room dialogue between clerks, lawyers and supporters.

"Do baje dusra courtwa mein jaana hai (At 2 we have to go to another court)," he pipes in. He mumbles something about Doranda.

He strikes one as more tired. Numb.

There is pathos hovering in the room too.

It is hard to remember that the defeated man, with the ugly brush cut, in front of you was at one time a chief minister and probably the first Bihari leader to capture India's imagination.

He was also the leader daring enough to stop the BJP's L K Advani's rath yatra in its tracks, in the interest of communal harmony, in October 1990, and send him to preventive custody.

No longer is he, it seems, the fighter who tweeted after his second sentencing in December: 'A lie can travel half way around the world while the truth is putting on its shoes... But still (truth) prevails... In the end though.'

An obsequious man, wearing a bright turquoise Nehru jacket over his kurta-pajamas, hovers behind Lalu attending to his needs.

The needs mainly consist of providing him with sips of mineral water and, after drinking, mopping the folds of Lalu's leathery chin with a towelette, that sports the large label of Roman Baths.

Periodically, there is a rumpus when Lalu gets up from his chair and leaves the room to rinse his mouth outside the door, through the grill into the bushes.

A handful of Lalu followers/relatives scurry after him to help him complete this recurring ablution.

He moves slowly, his arms wooden, his long kurta sleeves covering his fingers.

The CISF men, equipped with walkie-talkies, and the police constables standing at the door of the courtroom immediately jump to alertness when Lalu comes through.

Lalu is always a crowd puller.

There are innumerable spectators amassing beyond the doors.

The growing crowd peers in, restlessly edging further into the room, as do the cell phones and media cameras.

They are mainly young student types hoping to a get a peep of the fodder scam kingpin who in his heyday piqued even Harvard's interest. The courtroom, located in the 2001-built CBI courts building of the Ranchi civil court, at the city-central Kutchery Chowk, is part of a relatively modern complex in this dusty, very fast growing capital of Jharkhand.

The room is washed by lots of warm sunlight and is painted a bright white. A picture of Mahatma Gandhi hangs on the wall behind the Dell PCs and the judge's now noticeably empty chair.

Beyond the door, the melee, which has a life of its own, swells and ebbs, as a clutch of CISF men guard the door, preventing anyone insignificant from entering.

It is not a small courtroom. But certainly inadequate for the numerous visitors who come trooping in to see Lalu -- a king's court being held inside a court.

Streams of well-dressed people, in Arctic-worthy winter wear -- those that make it past the CISF ring -- arrive to touch Lalu's feet.

The very important spend a few minutes sitting with him and talking to him.

A woman wearing a black lawyer coat and a sari, bright red mang in her hair, gets five minutes with him. She seems awestruck and later stands up to take a picture of him in the courtroom and is not stopped by the police personnel.

Other politicians trickle in including a local RJD MLA and his wife who insists on standing next to Lalu's chair.

Lalu is at times irked by this crush of people. Disinterested too, picking his nose.

He seems to be going through the motions of meeting people. His coterie attempts to keep the majority of people away.

Anticipation hangs in the air.

Nothing happens. Everyone waits. The electricity goes. And returns.

A lawyer plaintively to the room: "Der ghanta se baithe hai (Sitting for one-and -half hours)..."

The bald and strange absence of proper names, and sometimes, pronouns in their references to Lalu in their dialogue denotes respect.

There is a bit of a surge in the crowd wrapped around the entrance of the courtroom.

Lalu's eldest son, among nine children, this young man -- a high school drop out, but considered one of Bihar's most eligible bachelors, for whom Lalu was hoping to receive a cow in dowry (at least) -- was Bihar's minister for health in the Nitish Kumar cabinet till the chief minister broke away from the Janata Dal-United-RJD-Congress Mahagathbandan last July.

Father and son don't greet each other like a father and a son.

Nevertheless, the chair next to Lalu is quickly vacated and Tej Pratap sits down next to his embattled dad. They talk in low voices for a bit. And then they settle back to waiting.

From time to time, the younger Yadav takes out his cellphone and shows Lalu pictures on it. Some of them seem to be meme videos.

Cell phones constantly ring in the room and occasionally a cellphone is popped into Lalu's hands and he speaks. He is served a pyala (cup) of chai too. Tej Pratap faces charges of his own -- for his alleged involvement in the Patna zoo soil scam and for the undeclared Rs 40 crore property that was turned into a mall in Patna, but was owned by Delight Marketing of which he is a shareholder. Those cases are ongoing and he is not in jail like his father.

Lalu has been lodged since December 2017 at the 3,215-capacity Birsa Munda central jail, also called Hotwar jail, about 15 km east of Ranchi city, at Khelgaon.

A newish jail, built in 2006 to replace the 19th century more central Ranchi jail, Lalu gets Rs 93 per day for gardening work, eats spartan meals and is allowed a television, a newspaper and visitors, according to local newspaper reports.

The convicted politician had complained bitterly, earlier, to the judge about the biting cold and requested leniency while sentencing given his age and his host of ailments (diabetes, heart problems). Finally, at about 2.30 pm, Judge Shivpal Singh sweeps in. Bespectacled, he is wearing a ski hat too; a grey one.

There is a flurry of activity. Everyone gets up solemnly including Lalu.

One by one, Judge Singh hears the pending petitions -- even as cell phones keep ringing in the courtroom, a norm around here -- and then comes to Laloo's peshi.

Evidently, some witness, who was to be examined, is missing today.

Judge Singh: "Kal argument hoga. Unko time de deejiye (There will be arguments tomorrow. Give him a date)."

A fresh date is given.

And the hearing is over barely minutes after it began. 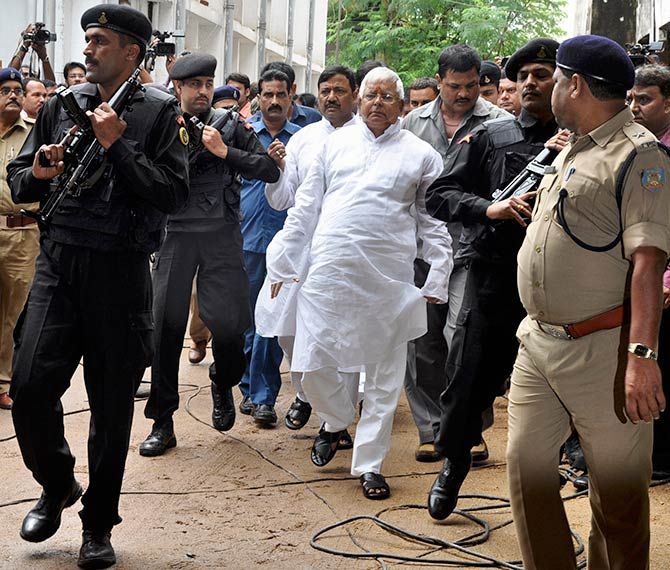 As Lalu exits the courtroom, a spectacle starts up.

By the end of the hearing, umpteen television channels have set up their tripods in the packed corridor outside the courtroom door, which would be against the rules in a Mumbai courtroom.

There is a ruckus as the Yadav party moves towards the white police Tata Sumo parked close to the crowded main road.

There is a lot of yelling and excitement as the various police personnel rush Lalu to the vehicle and it takes off pronto.