A day at a village primary health centre

More rural women are having babies in government hospitals.
Facilities have improved, but Bihar, discovers Archana Masih/Rediff.com, has a long way to go in public health. 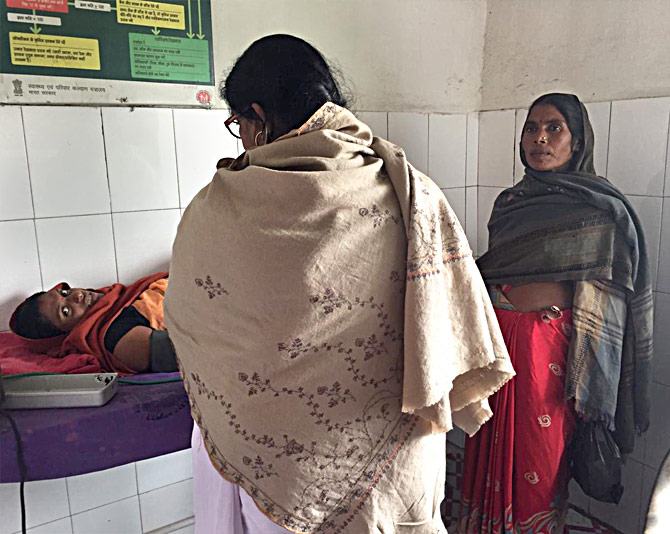 IMAGE: A nurse examines a pregnant woman. Complicated cases are referred to the more equipped referral hospital or the government hospital in the district. Photographs: Archana Masih/Rediff.com

A government ambulance stops outside the primary health centre in Nagra, Bihar. Three women, one of whom is pregnant, step out and make their way in.

The primary health centre is opposite a green field, near a precinct housing government administrative offices for the block. A block is a cluster of villages in a subdivision of a district.

Cycles and motorcycles are parked outside as people register themselves at the reception desk.

The health centre is the first point of contact between the government's health care system and the rural village community.

It is fairly clean. No flies or mosquitoes. Dustbins in different colours are marked for different wastes. A section of the small centre is allocated for maternity facilities.

There are around 5 to 6 deliveries every day, says a health worker. A marked change in recent years has been that home births have reduced drastically in the surrounding villages. Pregnant women come to the government or private hospitals for delivery.

"Institutional delivery has gone up to 70%, 4-5 years ago only around 40% women came to the government facility for delivery," says a health care worker at an NGO which works closely with the government in the health sector 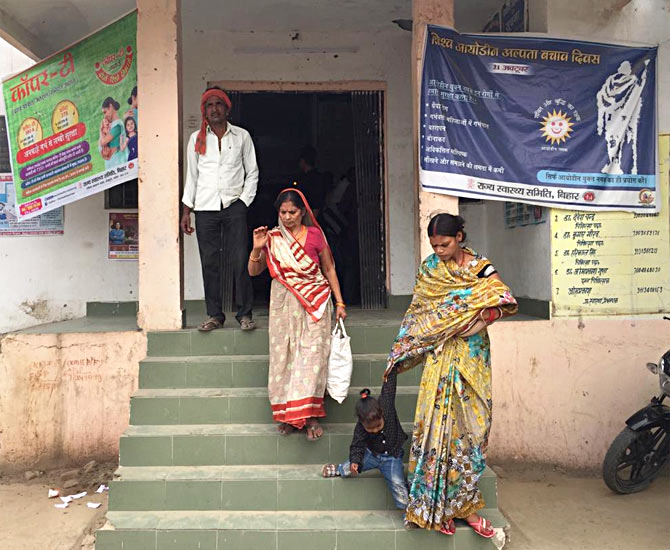 IMAGE: The primary health centre is located by the government's administrative office in the block. It is the first point of contact between the government's health care system and the rural village.

The PHC has a six-bed maternity ward, where Samhita Devi has just delivered her first child, a boy, a few hours ago. She is eager to get back home, but is advised to stay for some more time by the nurse.

When she leaves she will be given a card with dates of future visits and vaccination information for the infant.

A room with a board saying 'cold chain' has two big freezers to store immunization vaccines. The nurse in charge of the cold chain says the PHC has improved considerably over the past few years.

"These rooms were used as godowns to store medical supplies. Hardly any patients used to show up, but now the PHC has patients throughout the day. One or two doctors are present here every day," she says.

The maternity section has a number of posters providing information and instructions to staff and patients. From how to wash hands to how to wear gloves and how to revive a baby, some handmade posters in different colours show the baby's position in the uterus and symptoms of sepsis.

An oxygen concentrator, a suction machine and a machine to keep the baby warm are kept in the delivery room, which has a capacity for two tables, but had only one at the moment. Two of the machines were out of order and was expected to be repaired in a few days. 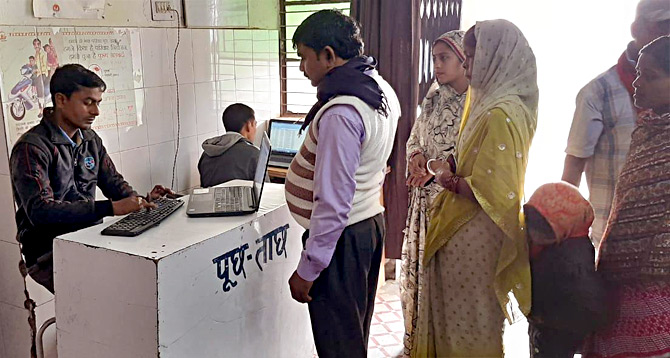 IMAGE: The inquiry desk at a primary health centre in rural Bihar.

The walls are pasted with a number of banners in Hindi with messages about free HIV tests for pregnant women, Kala Azar treatment, the 102 ambulance service, family planning etc.

ASHAs are paid Rs 400 for each person they bring to the health centre for contraception and Rs 600 for bringing a pregnant woman for delivery to the hospital. They are responsible for counseling the pregnant woman throughout the pregnancy.

One 'Asha didi' said her dues has been pending for a few months, and the government has not deposited the arrears in her bank account.

ASHAs are the frontline workers providing counselling about pregnancy, vaccines and contraception in the villages.

The onus for contraception is borne largely by women. Very few men opt for vasectomy, which is a 10-minute procedure. A man can go home 30 minutes after the procedure and can resume daily schedule two days later, says a poster at the entrance of the centre.

At this particular health centre there had been negligible contraception procedures done by men. "Women are expected to take care of this," says a young caregiver. "Though the government tries to do outreach work in the villages, this is an area where a lot of established myths have to be dispelled." 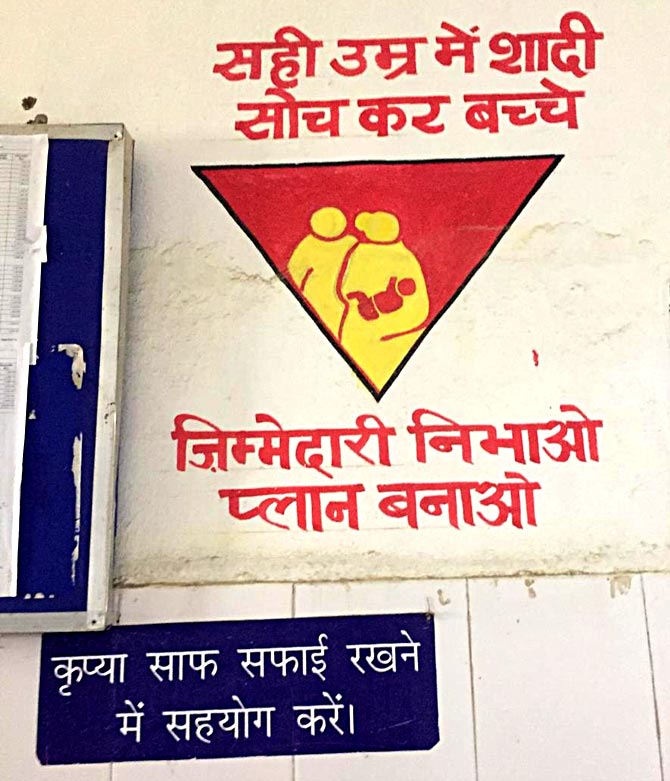 The centre's walls have many messages about maternal health and family planning.

The primary health centre has four doctors, including a dentist, who work in shifts. One doctor was on duty and the day's register showed a page-long list of those who had come seeking medical help.

The PHC also had a pathology lab for blood tests. The pathologist, on duty was testing blood samples.

Bihar is one of the two states, along with Uttar Pradesh, where the Bill and Melinda Gates Foundation has formed a partnership with the state government to improve health related issues in family planning, child immunisation, nutrition and infectious disease control. 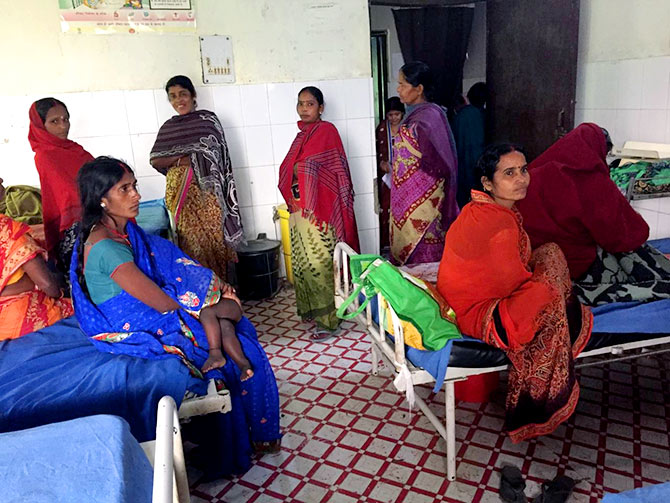 IMAGE: The six-bed maternity ward with patients and relatives.

A new medical college is expected to be opened in the district, but despite of improvements in pre and post natal healthcare, Bihar is reeling under a gross shortage of medical staff.

In its reply to a Supreme Court notice after the death of 150 children due to encephalitis last summer, the state government said there was a shortage of 57% doctors, 71% nurses, 72% lab technicians and 50% auxiliary nurse midwives in its government-run health centres.

The government has advertised recruitment of nearly 6,000 posts in the health department. "There has been improvement in 102 ambulance service, the quality of service in hospitals, availability of medicines, but the gross shortage of staff has resulted in health workers operating in fire fighting mode most of the time," says a senior staff working in the health sector. 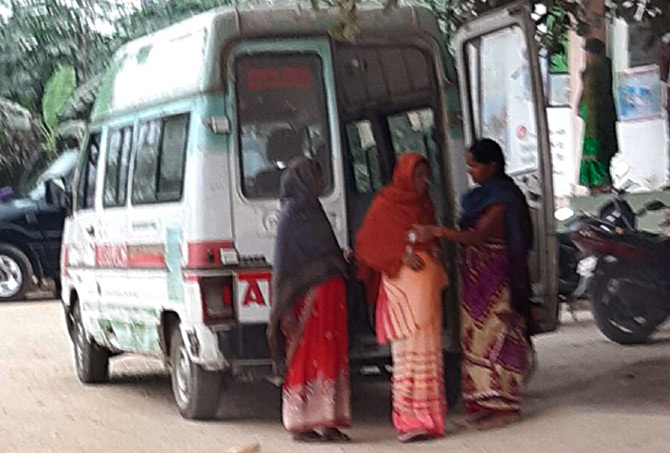 IMAGE: An ambulance brings a pregnant woman to the health centre.

With some successes and some failures in its health record, Bihar needs to shore up efforts and prioritise recruitment in the health sector and monetise health spending.