A man who was ready to die for the country in his youth waits for his government to recognise his sacrifice and pay him his due in his old age.
A Ganesh Nadar reports. IMAGE: "Netaji used to ask, 'Desh ke liye jaan doge?(Will you sacrifice your life for your country?)' And we used to shout, 'Denge! (We will!)," Veera Gandhi recalls. Photograph: A Ganesh Nadar/Rediff.com

'A freedom fighter's pension is not an act of charity, but a conferment of honour on such selfless fighters.'

An irate Madras high court made this strong statement while censuring the Tamil Nadu government for denying pension to a nonagenarian soldier of the Indian National Army for 37 years.

On January 27, it directed the Tamil Nadu state to pay him his due, along with arrears calculated from the date he first applied for pension -- July 6, 1980.

More than a month later, Veera Gandhi, who lives in Mudukulathur taluk in Tamil Nadu's Ramanathapuram district, is still waiting for his dues.

His father, who moved to Rangoon, Burma, was friendly with the local INA leader.

"My father was a fierce patriot and would go for every INA meeting," the 91 year old recalls. "He would take us as well. We would march with the INA."

After he completed Class 8, Gandhi decided to join the INA.

"My elder brothers and elder sister were part of the INA too. Five members of our family were in the INA," he remembers, pride enveloping those memories.

The old eyes shine brightly. "Netaji (Subhas Chandra Bose) used to ask, 'Desh ke liye jaan doge? (Will you sacrifice your life for your country?) And we used to shout, 'Denge! (We will!)."

"We used to carry the national flag and march with passion. Havaldar Gangabai trained us. We used to sing songs and shout slogans as we marched through the streets, defying the British."

"During INA meetings, Netaji would ask, 'Apne desh ke liye zindagi barbaad karne ke liye tayar hai? (Are you ready to destroy yourself for your country?)"

Gandhi is filled with pride when he recalls how the INA was funded.

"We were fighting alongside the Japanese when the British arrived. Once the Japanese retreated, we were at the mercy of the British who arrested us and kept us in jail. Once Netaji escaped, it was the end of the INA."

Gandhi was jailed in Burma from May 1945 to December 1945. Though these facts were endorsed by INA leader Colonel Lakshmi Sahgal, the Tamil Nadu government refused to provide him with a pension. 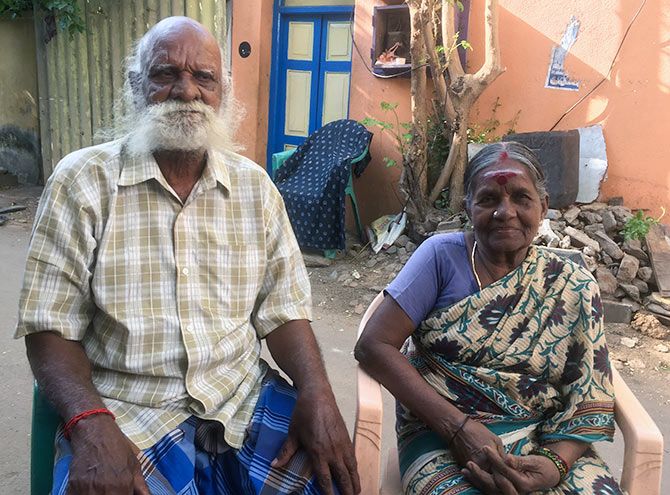 IMAGE: Veera Gandhi with his wife. The Gandhis had 10 children, five of whom have passed away. Photograph: A Ganesh Nadar/Rediff.com

Sitting outside his small home in suburban Chennai, he says, "After my release, I worked with my elder brother who had become a scrap iron dealer in Burma. I returned to India in 1964. It was only in 1980 that I realised that, as a soldier of the INA, I was entitled to a pension."

He applied for the pension in New Delhi and Tamil Nadu. Nothing happened, so he moved the court. He is entitled to get pension till his demise, after which the pension will be sent to his 84-year-old wife.

"The court ruled in my favour in 1992, but the Tamil Nadu government still refused to give me pension. I had no money or energy to fight back. Then, three months ago, my children and grandchildren decided to appeal again."

In January this year, Justice K Ravichandrabaabu of the Madras high court apologised to the veteran freedom fighter.

'Sorry sir, you are made to suffer at the hands of our people too. Unfortunately, this is how the bureaucratic dogmatism with a wooden approach works at times in this country, for which you fought to get freedom.'

Justice Ravichandrabaabu ordered the state to provide Gandhi with his pension within two weeks and to include arrears from 1980 onwards.

Overjoyed, Gandhi approached the government, but was told it would only give him pension from 2010.

In defiance of the Madras high court order, this meant he is denied a pension backlog spanning 30 years.

"Our lawyer will now do what is needed," he sighs.

"I was born on September 15, 1926. I don't know what the ration card people wrote and what the Aaadhar people wrote. I gave the Aadhar person the correct details, but he wrote 1928 instead of 1926 as my date of birth. The government is using this as an excuse not to pay my pension, saying my birth date is different in different documents."

This is not the only difficulty Gandhi faces.

"In 1974, there was a huge flood in Chennai. We were living in a mud house. I lost my uniform and all the documentation that proved I was with the INA and was jailed because of it. After the flood, MGR (then Tamil Nadu chief minister M G Ramachandran) gave us one sack of rice and rebuilt our home with cement. Today, this house is being eaten up by termites."

And so, a man who was ready to die for the country in his youth still waits for his government to recognise his sacrifice and pay him his due in his old age. 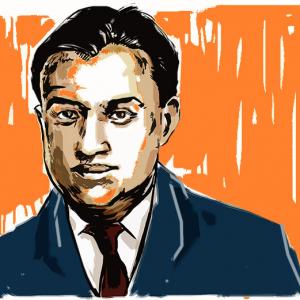 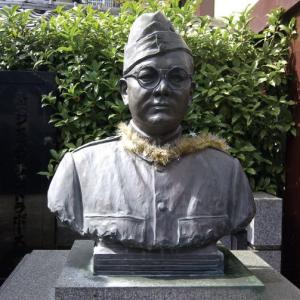