10 things about Jeremy Corbyn that will surprise you

Labour leader Jeremy Corbyn shocked British Prime Minister Theresa May in the biggest political upset in 43 years.
Katrina Tuli introduces you to the unusual politician who has ensured a hung House of Commons.
Illustration: Dominic Xavier/Rediff.com

First off, let's update you quickly on who Jeremy Corbyn is.

Leader of Britain's Labour Party that just did handsomely in the general election, he has been an MP since 1983 and represents North Islington, a district of Greater London.

Before Jeremy joined politics he represented the National Union of Public Employees.

His Socialist politics are about worker rights, no welfare cuts, no tuition fees and bigger support for Britain's National Health Service. 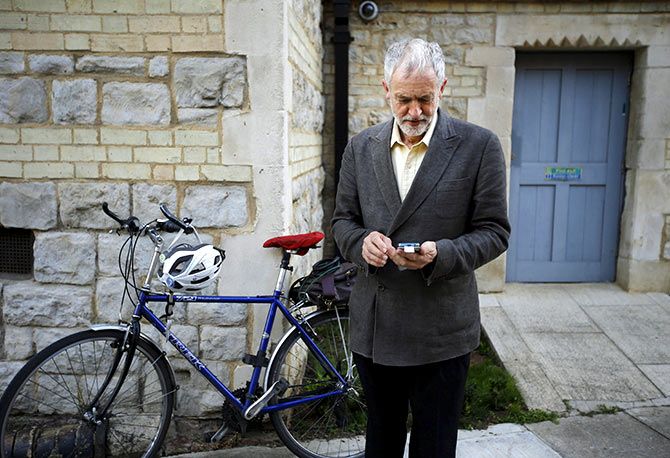 IMAGE: Prime Minister Theresa May called a snap election, greedy for a bigger mandate.
Labour was expected to lose badly and Jeremy Corbyn expected to fade away after the election.
Instead, the grumpy old Left-winger led Labour to stunning gains, decimating May's political legitimacy in the process.
Photograph: Peter Nicholls/Reuters

In spite of his parents' views he grew up in a seven-bedroom Shropshire manor house that he calls the 'old farm' and was educated privately. 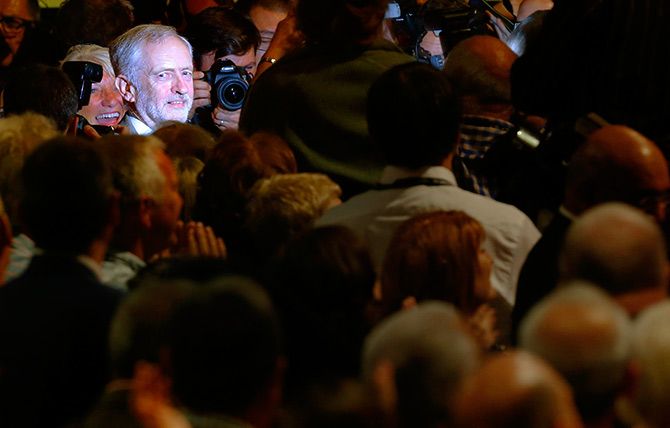 IMAGE: Corbyn speaks at his rallies in a low-key style and does not believe in taking down his opponents in bad language. Photograph: Luke Macgregor/Reuters

2. At 18 he volunteered for Voluntary Service Overseas and went to Jamaica for two years.
That was where he first grew his beard and was known locally as Mr Beardman.
He described the experience in the Caribbean as amazing.
Jeremy's first job was as a reporter for the Shropshire newspaper, the Newport and Market Drayton Advertiser. 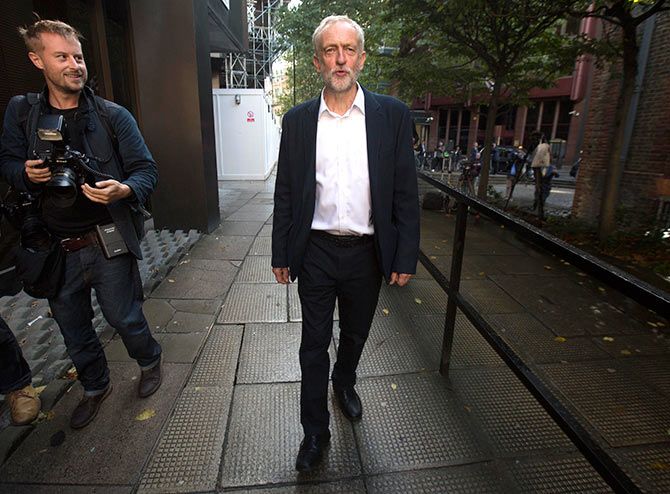 IMAGE: One of Jeremy Corbyn's famous quotes is: 'Are super-rich people actually happy with being super-rich? I would want the super rich to pay properly their share of the needs of the rest of the community.' Photograph: Neil Hall/Reuters

3. His work on a Shropshire pig abattoir made him a life-long vegetarian.
He is known to live austerely, does not own a car and mostly gets around on his bicycle. 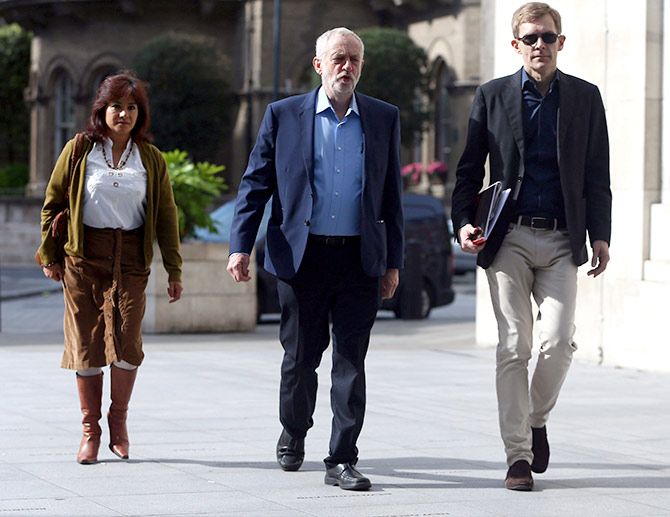 IMAGE: Jeremy Corbyn, seen here with his third wife, the Mexico-born Laura Álvarez, at a BBC studio in London.
He has been married thrice and divorced twice.
Photograph: Neil Hall/Reuters

4. His second wife Claudia Bracchitta was Chilean and the daughter of a well known diplomat Ricardo Bracchitta. He has three sons with her.
They disagreed on the way their boys would be educated and divorced soon after.
In 2013 he married his present coffee importer wife, Mexican Laura Álvarez.
His three marriages have earned him the tabloid slur: The Sexpot Trot. 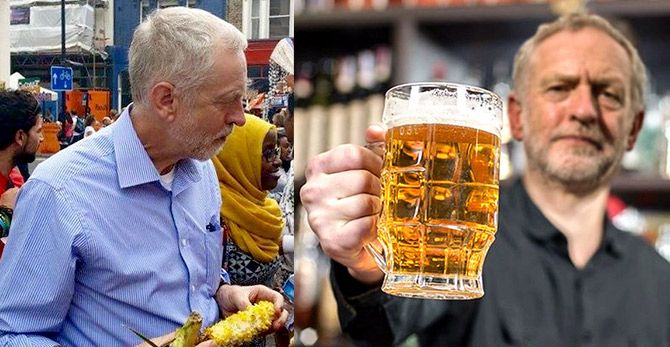 IMAGE: Largely a teetotaller and a vegetarian, in a country where eating is a matter of great importance, Jeremy Corbyn has done well.
Photograph: Kind courtesy @NicoleMorleyPet/Twitter and@JamesTeaCook/Twitter

5. His wife says he is not good a housework, but is a 'very good politician.'
Despite his austere ways, he likes eating cheese, especially Somerset Brie and Shropshire Blue, and thinks British cheese is the best.
He has one housewifely habit: Making jam from the fruit he grows on his garden plot.
A bit puzzling because he doesn't eat sugar, although if pushed to he will have a shortbread. 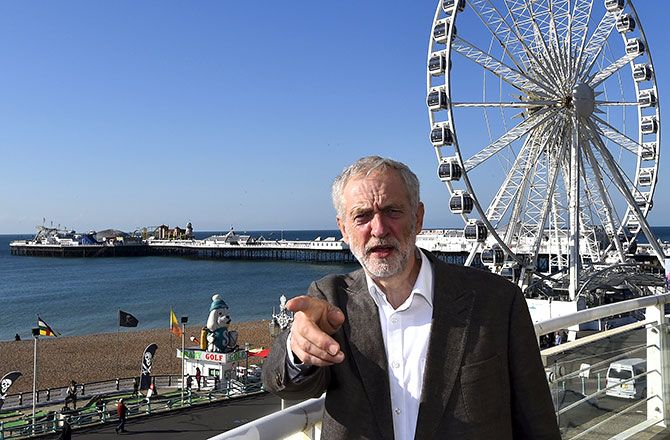 IMAGE: Jeremy Corbyn doesn't get out often.
No one has seen him shopping for bow ties or at the cinema, and certainly not at the opera.
This picture of him in Brighton is misleading.
He was not riding the ferris wheel.
He is posing as he leaves a television studio on the seafront at Brighton in southern England.
Photograph: Toby Melville/Reuters

6. Politics is his life and Jeremy doesn't do much else.
The politician the BBC called an 'austere ascetic' has an interesting hobby.
Jeremy likes taking pictures of manhole covers. It is one of his passions that he says people don't understand.
He also enjoys train-spotting (no, no, not the Danny Boyle kind).
And reading the poetry of William Butler Yeats, Chinua Achebe's novels and Latin American literature (yes, he speaks Spanish; after all, he has been married twice to Spanish-speaking women).
His all-time favourite films are Casablanca and The Great Gatsby.
He also supports Arsenal.
He has a reputation for frugality.
The MP with the lowest expense bills, he told The Guardian, 'I don't spend a lot of money, I lead a very normal life, I ride a bicycle and I don't have a car.' 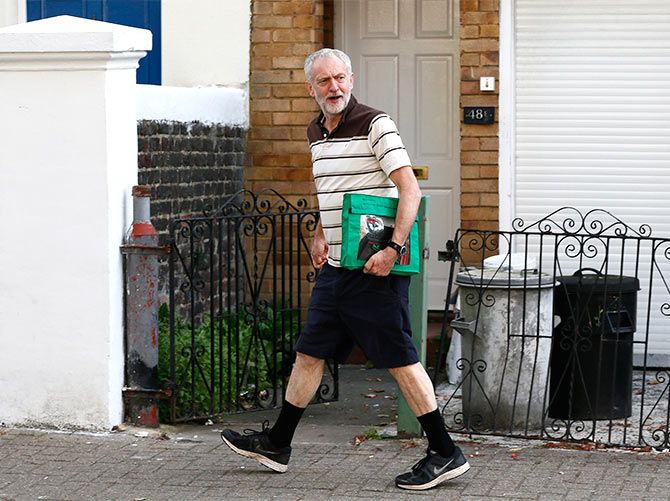 7. Some have called his wardrobe Soviet era fashion.
Others have, more kindly, said his lack of fashion is his charm -- his unaffected sense of dressing.
He rarely wears a tie. Or anything bespoke.
When he does opt for a neck-tie he looks uncomfortable and his suits are rumpled.
But he has a good hat sense. And looks pretty good on a bicycle.
A Savile Row tailor once asked if he could make Jeremy a suit, but the MP declined. IMAGE: Jeremy Corbyn, seen here with John Bercow, then the speaker of the House of Commons, and his wife Sally at a service of thanksgiving to mark Queen Elizabeth's 90th birthday at St Paul's Cathedral, London, June 10, 2016. Photograph: Matt Dunham/Reuters

8. We know he likes to sing the Beatles' classic Stand by Me.
He did so lustily at a Manchester election rally.
Reluctant to sing God Save the Queen, the British national anthem, at a Battle of Britain remembrance ceremony, after much criticism, he did so at the queen's 90th birthday service. IMAGE: Hmm, what do you think about his beard? Photograph: Peter Nicholls/Reuters

9. He has won best parliamentarian beard of the year seven times running.
But the Beard Liberation Front feels Jeremy trims his beard too much.
And The Economist noted: 'Over 35 years Corbyn has refashioned his beard from a scraggly heap to today's short and tidy style.'
In spite of these awards pogonophobia (come on, you can guess what that is) is big in Blighty.
Voters are said to dislike Jeremy's beard and could have apparently cost him votes.
Every male British prime minister, by the way, since Harold Macmillan has been clean shaven. 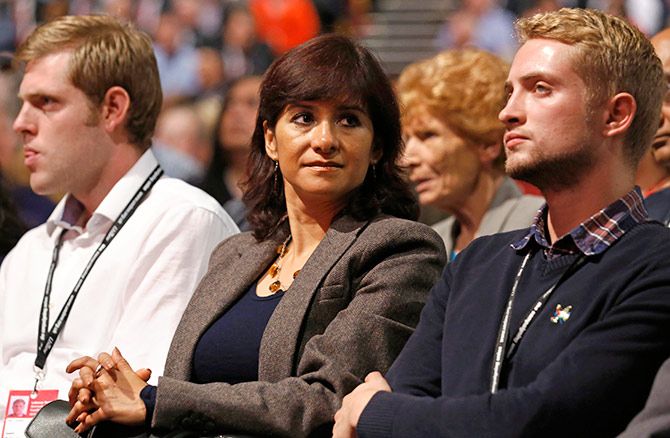 10. His brother Piers Corbyn is a well-known weather forecaster and meteorologist.
Piers is pretty bizarre in his appearance with wild flyaway hair and even more outspoken than Jeremy is.
The brothers are close.
Their mother taught math at a grammar school; their dad was an electrical engineer.