Sign in  |  Create a Rediffmail account
Rediff.com  » News » Sociologist Shiv Visvanathan: Youth were not protesting against rape but indifference

Sociologist Shiv Visvanathan: Youth were not protesting against rape but indifference 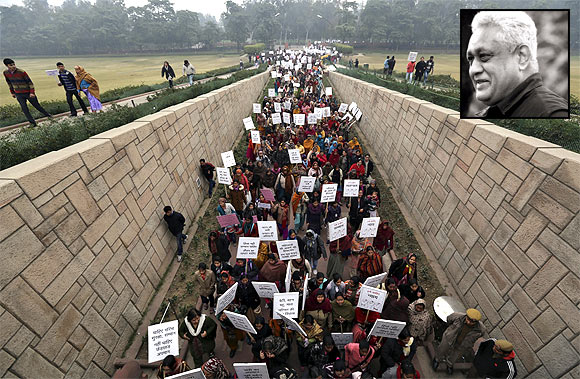 Professor Shiv Visvanathan speaks to Rediff.com's Sheela Bhatt on the recent demonstrations by India's youth, and on current political and social trends.

You can expect Professor Shiv Visvanathan, intellectual and author, to start a lecture on Society in Transition with the sentence, "Soil is the basis of Constitution of the nation."

Professor Visvanathan has a habit of forcing listeners and readers to shed their laziness and think. Like when he asked, 'Can you have 5,000 varieties of rice in our Constitution?'

A social anthropologist with a PhD from Delhi University, Professor Visvanathan taught at the Delhi School of Economics. He was a senior fellow at the Centre for the Study of Developing Societies where internal politics prevented him from becoming the head of the institution.

Till recently, he was a professor at the Dhirubhai Ambani Institute of Information and Communication Technology, but Gujarat Chief Minister Narendra Modi's government didn't find his presence in Gandhinagar suitable, so he was thrown out unceremoniously by the management.

He is currently a professor at the O P Jindal Global University, Sonepat, Haryana, and is working on the effects of the Kudankulam nuclear power project in Tamil Nadu and on the issues raised by human rights activist Irom Sharmila of Manipur, the feisty activist who has been on a hunger strike since 2000 against the misuse of the Armed Forces (Special Powers) Act, 1958.

Professor Visvanathan has taught in educational institutes around the world, which includes the University of South Africa and Stanford University in the United States. He considers Alfred Wallace, the 19th century British scientist and a colleague of Charles Darwin, his guru.

It's difficult to put him in a bracket or under single heading. He is a social anthropologist, teaches philosophy, is a crazy film buff, is like a nomad who never got real institutional support to flourish. He is curious, an avid listener, and he speaks loudly.

He has the courage of convictions to write what he thinks. His career trajectory shows that, basically, he is a fine human being.

His books Organising for Science and A Carnival for Science have been very well received. He has co-edited Foul Play: Chronicles of Corruption 1947-1997 with Harsh Sethi.

In an exclusive interview with Rediff.com's Sheela Bhatt, the professor discusses the recent youthful demonstrations on current political and social trends.

He also tries to give us an idea how Narendra Modi will perform if he becomes a resident of 7, Race Course Road, the Indian prime minister's official residence.

In 2013, if a person like you, takes a long shot of what is happening in urban India, what would you see?

How do you see urban India's mindset right now?

I think it's a protest of very everyday issues. A girl going to the office and coming back, if that whole act becomes an adventure that frightens the parents, so they have to sort of clock her on a mobile phone, the civics of the city are breaking down.

In a way I think the protest at India Gate was about people saying that a city is a form of social contract and the contract is broken down because the police won't protect you, the goons can do what they like and the way the city is growing doesn't allow for young people to congregate safely.

So they are harassed in parks, gang-raped anywhere they like and people use the anonymity of the city to escape. So in a way the city protects the villains rather than the subjects of the city.

The city does not protect the citizens. So in a way it was a protest about very simple things.

Many of those kids were protesting for the first time. They didn't know what was happening.

'Corruption is a daily event of city life' 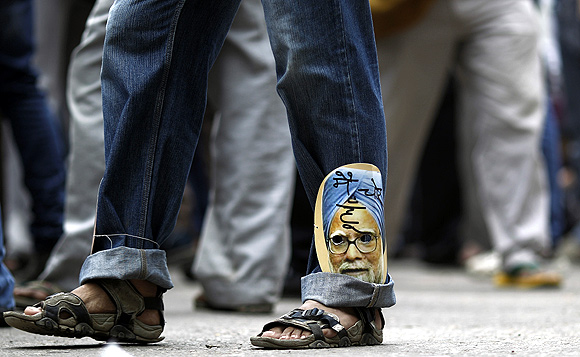 Image: A supporter of activist Anna Hazare wears a cut-out of Prime Minister Manmohan Singh during a protest against corruption
Photographs: Adnan Abidi/Reuters

Why was there such reaction against this particular gang-rape? So many rapes occur in India...

Yes, hundreds of rapes are taking place. It takes some time to cumulate. And also in this case they saw the indifference of the administration.

I think what they were protesting wasn't gang-rape, but against the scandal of indifference.

I think that is what really created the problem. It told them two things. Anyone of them could have been the girl. So in a way it had what I call the 'rakhi effect'.

The second thing is, they realised that if that happens, they are completely subjected to humiliation, indifference, police indifference and harassment. So they said this can't be my city.

This can't be the city in which we work or go to college and I think they decided to protest.

There is a cynical view of what you are saying. What is the use of going there and protesting because we exactly know what is happening on the issue of corruption.

The protests at Jantar Mantar along with Anna Hazare were equally vibrant. But the amended Lokpal bill is so diluted. A politician called it 'limbu pani.'

Look, the cynicism of politicians I can understand. I don't think the citizens are cynical, they are sceptical. They realise that if they don't protest, something would happen to them.

I think it was an important learning experience.

The protest against corruption and the rape incident were contiguous. I think you would understand that in both, hundreds of anonymous people, no big names, protested. And I think they realised that politics is an important part of their lives.

For the last few years on one hand there is a feeling that there is a collapse of the State. But, right now what you explained to me, I think, you are ending on a positive note.

The rape tragedy happened in the heart of the capital. So I think the gang-rape hit the core of the city and it challenged the core competence of the city administration.

See, whether it is the Naxals or Manipur or something, I don't think it figures in Delhi's imagination.

And people are saying the administration is indifferent to them.

I think it is a very different kind of protest. It is a mass protest, but not by the masses. People just individually came there. There was no great coordination.

People came because they wanted to express solidarity. And that is the core of this thing -- solidarity and sympathy, and the right to demand a different kind of civics.

So what they were challenging was the very constitution of this city.

Naxalbari, Manipur, are very, very different events. There, to a certain extent, because of the language of security, we have distanced it from our daily lives. But here, I think it is a very every day event.

A girl getting harassed, a policeman refusing to file an FIR (First Information Report), parents worrying about when their children will come home.

So out of the virtual civics of family life, a different kind of protest grew.

Corruption is a daily event of city life. Everyone feels that unless you pay a bribe, you are not a citizen.

'Change is invertebrate. It is not planned' 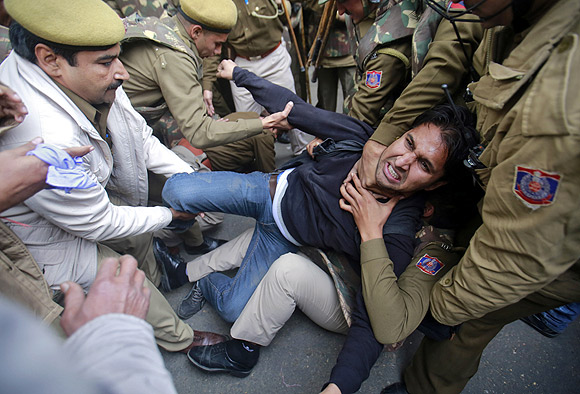 Image: The police detain a demonstrator during a protest against the Delhi gang-rape
Photographs: Danish Siddiqui/Reuters

So the issue of lack of governance is at the centre of everything.

Yeah. But I think what they are doing is that they are giving it a wrong definition of governance.

Governance is not only efficiency, it is also caring.

Here the sheer violence of the gang-rape shook the city and the administration. I even heard some journalists saying this was going to drive Modi (Gujarat Chief Minister Narendra Modi) out of the first page -- which it did.

I think this is crucial. It showed the potential of the issue.

We always say the generation under 25 is indifferent, consumerist, apolitical. This time it proved that it might be consumerist, but it can also be very, very political. And I think that is a heartening sign.

Things will take time. Don't forget the Right to Information. It went through 160 changes before it became a bill. It will take time. But if the pressure is put, hundreds of things can happen.

After all, we are a country that is allowing women to be represented legislatively. So I think changes are happening, but it will take time.

But the change is invertebrate. It is not planned. You can't write an equation around it. I am very hopeful.

Do you think society has turned more violent?

I think several things have happened. One, despite the revolution of rising expectations, despite commodification, the amount of people who are poor or vulnerable has increased.

You might talk about consumerism and the cost of gas and so on, but you see people collecting firewood even today.

There is poverty. And there is rank urban poverty.

Second, there is vulnerability. Hundreds of disasters are taking place. No one bothers. I mean many other places, in villages where the population is under a thousand, they don't even have a census.

So hundreds of anonymous people, migrants, marginals, tribals, are disappearing or are so poor that we are not bothering about them.

I think, to a certain extent, two kinds of violence are taking place. Violence against the marginals, but also the very violence of the city in terms of consumerism, and consumption and the repression.

Also, there is the issue of India's ability to handle its own sexuality. I think that is a very key problem. 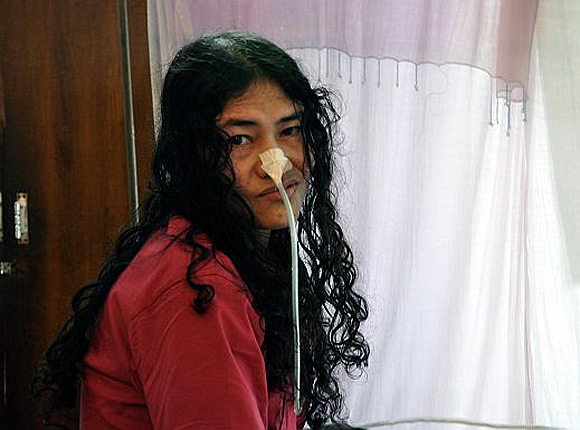 Why in a country like ours, where they say famously that we had the Kamasutra...

That's a bit exaggerated. The Kamasutra might be a great book, but you don't find copies of it floating around.

I think, the Indian middle-class, partly because of the family, and also because of great migrations where men leave behind their families and come to cities, there is tremendous repression.

And the only alternative is pathology or prostitution.

So where will it lead us to?

A new kind of democracy, which handles the social dimensions of violence. I don't think we are thinking through violence.

But don't you think it is not happening around us?

I think it is happening. The slow thinking. I was in Manipur recently. Look at Irom Sharmila's protest. I met her. I think I was the first person along with my colleague to meet her in the last four months. And what was she saying?

Stop this violence so I can lead a normal life. She didn't ask for anything more. She wants a return to normalcy where a woman can be a woman. What is wrong with that demand?

I think that is what a lot of people are saying. Stop this violence, so we can be what we are. Ordinary people, pursuing ordinary lives.

Everyone is asking for basically a return to sanity and normalcy. Everyone says we are consumerist. We may be.

In large parts of India, that is no longer possible. You have different reasons for it.

The fifth level is this model of development which displaces people.

Why don't we ever look at that?

In the next segment of the interview, read Shiv Visvanathan's views on how Gujarat Chief Minister Narendra Modi will fare if he becomes prime minister.