Sign in  |  Create a Rediffmail account
Rediff.com  » News » 'You don't make your country any safer by killing children' 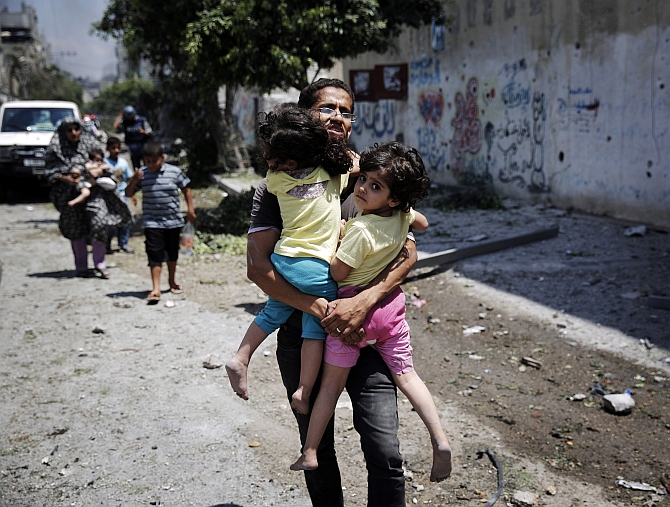 Image: A Palestinian man carries children in the Shejaia neighbourhood, which was heavily shelled by Israel during fighting, in Gaza City.
Photographs: Finbarr O'Reilly/Reuters Vicky Nanjappa/Rediff.com

'Abstaining from the UN vote would not have sent a strong enough message to register the great concern India has about the plight of Palestinian civilians,' Michael Kugelman tells Vicky Nanjappa/Rediff.com

The Indian government's decision to vote against Israel at the United Nations has attracted some flak. On Wednesday, July 23, India voted in favour of a probe by the United Nations Human Rights Commission into the killings by Israeli security forces in Gaza.

While some question the contrary stand taken by the Narendra Modi-led National Democratic Alliance government in Parliament, other experts feel India voted as a bloc with the BRICS (Brazil, Russia, China and South Africa apart from India) nations.

Michael Kugelman, Senior Program Associate for South and Southeast Asia, Woodrow Wilson International Center for Scholars, a Washington, DC-based think-tank, points out to Vicky Nanjappa/Rediff.com India's decision simply represents continuity as it had voted against Israel in 2008 and 2011 as well.

Your thoughts on the situation in Gaza. Is Israel's action warranted?

Israel certainly has reason to be concerned about Hamas and the threat it poses to Israeli lives. However, the disproportionate level of violence Israel is using in Gaza is alarming, to say the least.

There is an asymmetry at play -- heavy Israeli airstrikes and ground offensives in Gaza versus rockets fired into Israel (many of them shot down by Israel's Iron Dome defence system). The civilian casualties are simply heartbreaking.

Israel has stated -- correctly -- that is has a right to defend itself. However, in the end, you are not making your country any safer by killing the children of your enemy next door.

''You don't make your country any safer by killing children' 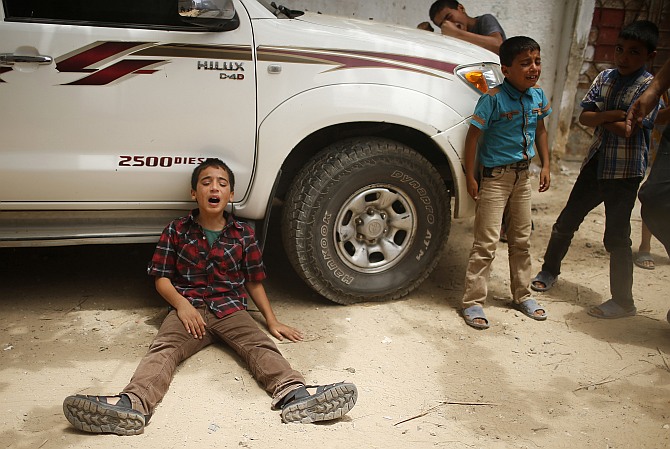 India has voted against a traditional ally, Israel, at the United Nations. What, do you think, prompted India to take such a stance?

I think three options are at play. First, India wanted to vote as a bloc with the other BRICS States -- this is in line with the Modi government's desire to be more actively engaged in regional groupings, such as BRICS, and also to strengthen such regional groups and thereby extend India's global influence. Voting in solidarity with BRICS ultimately strengthens BRICS.

Second, even as India's foreign policy has evolved in recent decades, and it has sought to position itself as a rising power, it still nonetheless remains influenced by the ideas of the nonalignment movement.

This movement led India to associate itself with other post-colonial developing countries -- and particularly those oppressed by more powerful States.

By refusing to condemn Israel's actions, India would have been out of step with opinion in other non-Western States -- and with the views of nonalignment.

Third, India has a pattern of voting against Israel in the UN. This happened back in 2011, when India voted in favour of a resolution that condemned Israel's actions in a war in 2008. So in a sense, India's position simply represents continuity.

India had the abstain option. Why do you think this was not taken?

Abstaining would not have sent a strong enough message to register the great concern India has about the plight of Palestinian civilians. It would not have allowed India to vote in solidarity with the other BRICS States. And it also would have gone against precedent, when India has voted in opposition to Israeli military actions.

How will this help India?

The biggest boost for India here is that it will help burnish India's credentials as an active and supportive participant in BRICS. 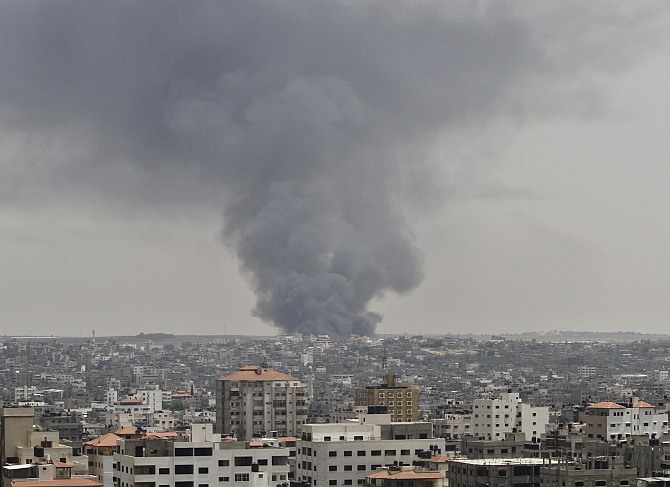 Will this decision affect India's relations with Israel?

Not at all. India's government has taken care to underscore that it continues to value its ties with Israel, and that this vote in the UN ultimately signifies concern, not opposition.

The fact that India's government prevented an anti-Israel resolution from passing domestically will also help smooth any tensions with Israel.

India-Israel relations have been fine after India has voted against Israel in the UN in the past. I don't see why this time should be any different.

Will this decision change the mindset of Muslim nations such as Pakistan against India?

Muslim nations are likely to applaud India's decision, though one single vote in the UN will certainly not be a game-changer. India remains close to Israel, and will continue its fairly deep defence cooperation.

How do you think Pakistan would view this decision?

Pakistan will likely view it as the right move. Beyond that, though, it shouldn't have any impact on relations. Pakistan is very concerned about (Prime Minister Narendra) Modi's ascent to power, though Modi's conciliatory moves and statements about Pakistan in his first weeks in power have assuaged some of this concern.

I don't see why an Indian vote in the UN about Israel will have any impact on any of this.