Although there is growing pressure from the party rank and file that Priyanka Gandhi should play a lead role in electoral politics, the leadership will be constrained from giving in to these demands as her emergence would automatically eclipse Rahul Gandhi, notes Anita Katyal.

Media reports about the possibility of Priyanka Gandhi playing a larger role in next year’s Lok Sabha election created a flutter both in the ruling Congress and the principal opposition party, the Bharatiya Janata Party, on Monday.

Realising that Priyanka’s entry would change the dynamics in the coming polls, nervous BJP leaders made frantic calls to ascertain the veracity of these reports.

While this news generated considerable excitement in the Congress rank and file, which has been pressing for Priyanka Gandhi’s entry into politics, the party leadership was clearly not amused as it would obviously send out a message that its PM-in-waiting Rahul Gandhi had been ineffective in challenging BJP’s prime ministerial candidate Narendra Modi.

It was for this reason that the Congress was quick to deny these reports. “We are denying the news of Priyanka Gandhi to campaign for 2014 general elections,” Congress spokesperson Ajay Maken said. He even accused the BJP of fanning these rumours to divert attention from the temple stampede in Datia because it reflected poorly on Shivraj Singh Chouhan’s government in Madhya Pradesh.

'Both Sonia and Priyanka want Rahul Gandhi to succeed' 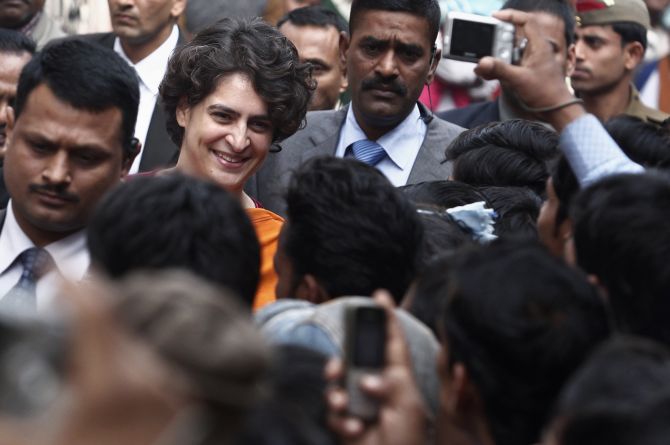 The Congress party’s emphatic denial, however, failed to put an end to the swirling speculation about Priyanka Gandhi’s future political plans. She has, so far, only campaigned in the family pocket boroughs of Amethi and Rae Bareli, but there is talk now that she could step out of Uttar Pradesh and venture out to other states as the elections draw closer.

Congress insiders maintain that the possibility of Priyanka Gandhi stepping out cannot be ruled out completely.

“Both Sonia Gandhi and Priyanka want Rahul Gandhi to succeed. The two will do anything to help him out even if it requires Priyanka to campaign outside Uttar Pradesh,” remarked Congress-watcher Rasheed Kidwai, author of “Sonia -- a biography” and “24 Akbar Road”.

It is accepted in Congress circles that if she decides to campaign, the charismatic Priyanka Gandhi would electrify the crowds and enthuse party workers. People see a resemblance between Priyanka Gandhi and her grandmother Indira Gandhi as she is a relaxed campaigner and connects easily with the crowds.

Priyanka has, so far, confined her campaign to her mother and brother’s Lok Sabha constituencies in Uttar Pradesh. She is a frequent visitor to Amethi and Rae Bareli where she holds regular meetings with party workers. Priyanka had been an instant draw when she campaigned for Sonia Gandhi in Bellary in 1999. But she has persistently maintained that she has no plans to enter the electoral fray.

Congress cadres privately admit that Priyanka Gandhi would improve the party’s electoral prospects as she has the capacity to take on Narendra Modi whose growing popularity, fast threatening to become a wave, is a worrying factor.

'Rahul behind Modi in the race for popularity'

This is especially so as Rahul Gandhi’s campaigns are not having the same kind of impact as Modi’s rallies. The Nehru-Gandhi scion has a tough task on hand as issues like corruption, inflation and poor governance are weighing down the Congress campaign.

Rahul Gandhi is making a valiant attempt to hard sell the UPA government’s achievements, especially the food and land bills, but he has not been able to change the political discourse in favour of the Congress. The party could succeed in doing so if Priyanka Gandhi decides to campaign in states outside Uttar Pradesh.

Although there is growing pressure from the party rank and file that Priyanka Gandhi should play a lead role in electoral politics, the leadership will be constrained from giving in to these demands as her emergence would automatically eclipse Rahul Gandhi. And this will not be acceptable to either Sonia Gandhi or Priyanka as all their energies are currently focused on ensuring Rahul Gandhi’s success.

Congress cadres are known for their sycophantic veneration of the Gandhi family. On the other hand, they can also prove to be extremely cruel. Party workers would not think twice about deserting Rahul for Priyanka if they realise that he cannot ensure their victory. Well aware of this harsh reality, Sonia and Priyanka will weigh all these factors before making the next move. 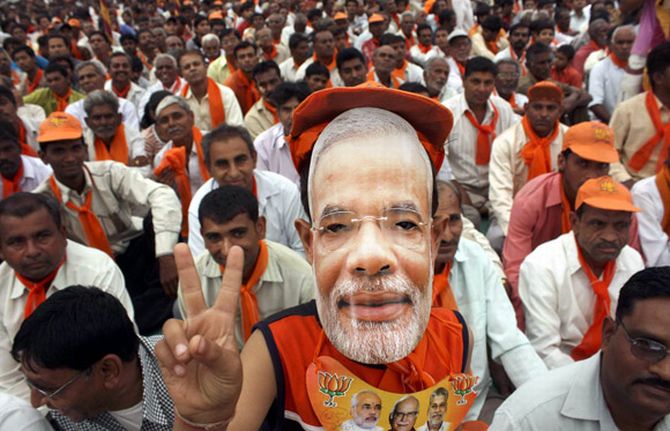 Besides Congress workers, the BJP is also following the internal developments in the grand old party. A serious contender for power, the main opposition party is banking on Narendra Modi’s popularity to come back to power in 2014.

Modi’s campaign has succeeded in grabbing eyeballs but Priyanka’s arrival could change things -- for not only can she pull in crowds but she is also a media favourite.

The saffron party, therefore, lost no time in attacking the Congress even after it denied reports about Priyanka’s campaign plans.

"A party which believes in its dynastic policies is talking about another Gandhi. She has even extensively campaigned during UP assembly elections and we have seen the result," BJP spokesperson Nirmala Seetharaman lashed out.