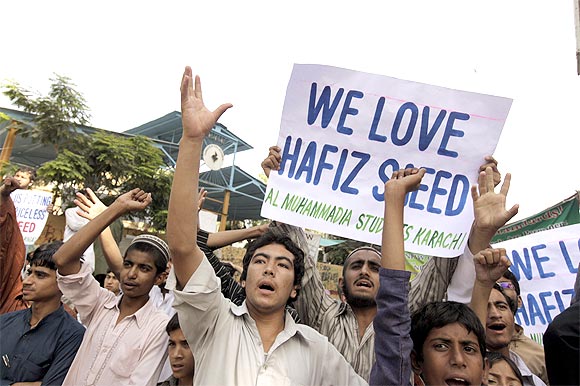 Indian officials know that the more they seek Saeed's detention, the more Pakistan will try to protect him, says Vicky Nanjappa

During the recent talks with Pakistan, India made its neighbour an offer of Rs 56 crore if it handed over 26/11 terror strike mastermind Hafiz Saeed. The offer was made despite Pakistan maintaining that the information about Saeed, the founder of the Lashkar-e-Tayiba, was all based on hearsay.

The Indian delegation did manage to convince Pakistan about the role played by LeT terrorist Zaki-ur-Rehman Lakhvi in orchestrating the attack. Pakistan is likely to act against Lakhvi, who handles the operations of the Lashkar.

While action against Lakhvi would be a welcome step, Indian authorities also want Saeed to be pushed against the wall. India's biggest threat remains the Lashkar, an outfit that relies on Saeed.  And India knows that the Jamaat-ud-Dawa chief is capable of creating many more terrorists like Lakhvi. 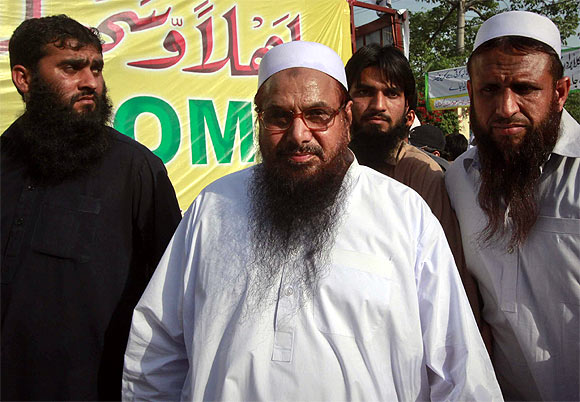 Pakistani authorities are likely to take action against Lakhvi as a compromise measure. They know that Lakhvi is merely a foot soldier and he can be replaced over a period of time.

But Saeed drives Pakistan's policy against India and is irreplaceable for them, Intelligence Bureau officials told rediff.com.

The Inter Services Intelligence will try to shield Saeed, who has a massive public following. His rallies draw huge crowds and his hate speeches are considered inspirational for jihadis.

Saeed is also the axis around which the Lashkar plans and carries out its terror agenda. Without its founder, who motivates thousands of cadres to wage jihad around the world, the LeT will lose its sheen. 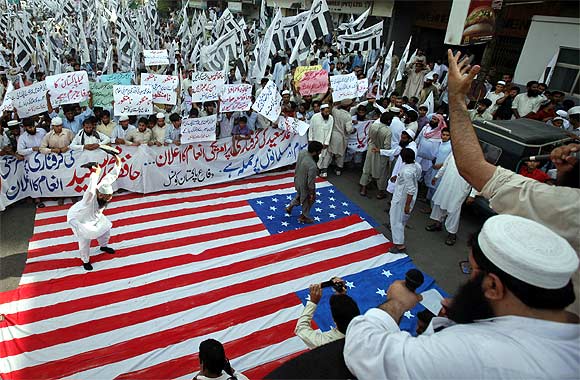 Image: A supporter of the Jamaat-ud-Dawa beats the US flag with his shoes during an anti-American rally in Karachi
Photographs: Athar Hussain/Reuters

Just like slain terrorist Osama bin Laden made Al Qaeda the deadliest terror outfit in the world, Saeed has been instrumental in making the LeT a dreaded force in Asia.

According to IB sources, the ISI is trying to propel the LeT into the big league by turning it into a global terror threat. After Osama's death, the Al Qaeda's strength has been gradually eroding. The LeT may become the next Al Qaeda.

At such a tumultuous time, Pakistan authorities will not hand over Saeed, who can attract many misguided youngsters to carry out the cause of jihad.

Saeed has also been unflinchingly loyal to Pakistan. Unlike other major terrorists like Ilyas Kashmiri, who have defied the ISI, there has never been any evidence of disagreement between Saeed and the spy agency. 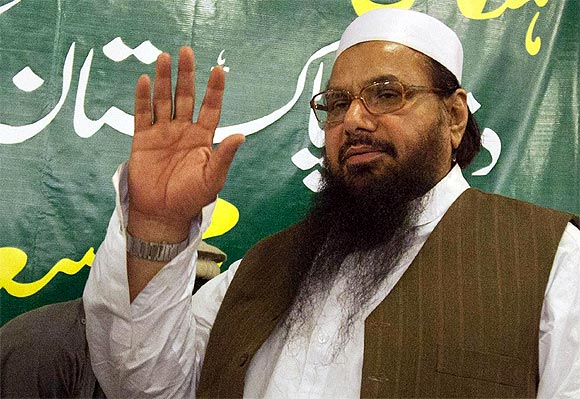 Saeed, say IB officials, is like a puppet that the ISI can use in whatever way it wants.

Indian officials know that the more they seek Saeed's detention, the more Pakistan will try to protect him.  Taking action against Lakhvi, the second in command in the Lashkar, will keep the heat off Saeed for a while and prove to the world that Islamabad is serious about combating terrorism.

But the Lashkar will continue to be a major terror threat as long as Saeed, referred to as chacha by the cadres, continues to command it.

Lakhvi, the operational chief of the LeT, may face strong action. But the man who makes the LeT tick will continue to be a headache for Indian agencies.