Why Osama was hiding in a non-tribal area 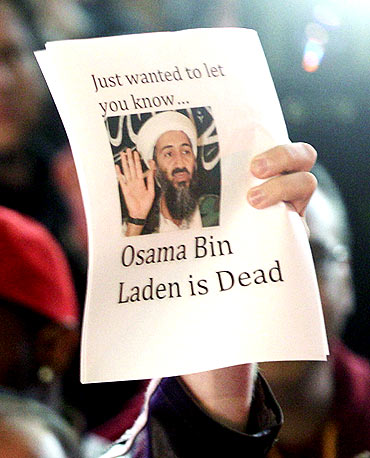 In an interview to ABC TV channel's This Week on June 27, 2010, Leon Panetta, director of United States's Central Intelligence Agency, is reported to have stated as follows,

"Osama bin Laden remains in very deep hiding, but consistent pressure will flush him out. While hard data on him has been slight since the 2001 attacks, the CIA and US forces have killed or captured at least half the leadership of the Taliban and Al Qaeda. We took down the No. 3 in their leadership (Mustafa Abu al-Yazid) a few weeks ago. We continue to disrupt them. We continue to impact on their command and control. We continue to impact on their ability to plan attacks in this country. Al Qaeda's depleted numbers had shrunk dramatically. The pressure is definitely on bin Laden and Al Qaeda number two Ayman al-Zawahiri. I think at most, we're looking at maybe 50 to 100 (Al Qaeda members), maybe less.

If we keep that pressure on, we think ultimately we can flush out bin Laden and Zawahiri and get after them. President Barack Obama had made going after Al Qaeda the fundamental purpose of the Afghan military mission. We've got to disrupt and dismantle Al Qaeda and their militant allies so they never attack this country again. Bin Laden remains in very deep hiding in a tribal area in Pakistan surrounded by tremendous security. The terrain is probably the most difficult in the world.  It has been years since the United States has had good intelligence on the whereabouts of bin laden, although he is thought to be in Pakistan."

Successful hits against other Al Qaeda leaders in tribal areas, but not against Osama 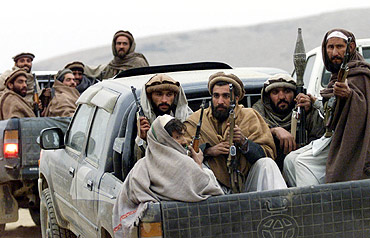 Image: Afghan fighters in the Tora Bora mountains, December 16, 2001. Laden was believed to have escaped into Pakistan's tribal areas through this area of Afghanistan
Photographs: Eric de Castro/Reuters

It is nine years since the US intelligence agencies and military forces in the Af-Pak area started their hunt for Laden after he was believed to have escaped into Pakistan's tribal areas through the Tora Bora area of Afghanistan. They have had no success in getting at him.

At least in the case of al-Zawahiri, his No 2, there was a report in January 2006 of a near miss in the Bajaur agency, but in the case of bin Laden there have been no reports of even a near miss. Neither the periodically-enhanced cash reward offers nor stepped-up attacks by the drones (pilotless planes) of the CIA have got him. The drone strikes -helped by improved human and technical intelligence - have been increasingly successful against leaders and cadres of the Taliban, the Islamic Movement of Uzbekistan, the Islamic Movement of Eastern Turkestan and the Punjabi Taliban organizations. There have been some successful hits against other leaders of Al Qaeda too, but not against bin Laden.

The drone strikes have been largely confined to North and South Waziristan and occasionally the Bajaur agency. If bin Laden is in one of these agencies, he is most likely to be hit one of these days if the US keeps up its drone strikes because Al Qaeda and its allies do not have a wide choice of hide-outs.

The fact that there has not even been a speculation that bin Laden was anywhere near the areas that have so far been hit by the drones would give rise to questions as to whether he could be in one of the Waziristans, where he is often placed by the US intelligence. Other likely tribal areas of his hiding are in the Chitral area of Pakistan and in the Nuristan area of Afghanistan. There has been no concrete indication from those areas either.

Was Osama hiding with the help of Pashtun migrants? 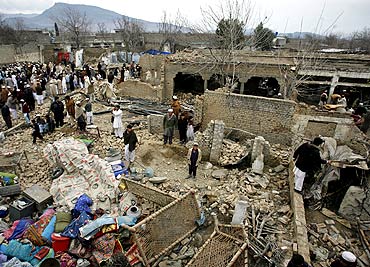 Image: After a suicide bomb attack on March 3 in Pakistan's Khyber-Pakhtoonkhwa Province, where Osama was reportedly killed. The Shias among the Pashtuns, particularly in this area, had no interest in protecting the Al Qaeda leader
Photographs: K Parvez/Reuters

The announcements of huge cash rewards for information leading to his capture or death amounting to millions of US dollars have been widely disseminated all over the tribal areas in the Federally-Administered Tribal Areas (FATA) of Pakistan and in its Khyber-Pakhtoonkwa province (formerly known as the North West Frontier Province).

The absence of any leads about him from the Pashtun areas could be attributed to the loyalty of large sections of Pashtuns to him and to their aversion to helping the US in getting rid of him. But not all Pashtuns like bin Laden or are loyal to him to that extent. The Shias among the Pashtuns, particularly in the Kurram Agency of the FATA and in parts of Khyber-Pakhtoonkhwa, and the Pashtun members of the Awami National Party, which is a member of the ruling coalition in Islamabad and is the head of the coalition in Peshawar, dislike him. They have no interest in protecting him.

The fact that neither the interested reward-seekers nor the CIA drones have been able to get any inkling of the whereabouts of bin Laden would once again bring to the fore the question that I had raised from time to time in the past: Is he really hiding in the tribal areas as assessed by the CIA or is he hiding in the non-tribal areas with the help of Pashtun migrants in those areas? The drones cannot reach him in the non-tribal areas.

There will be many non-tribals interested in the huge cash rewards, but they may not have access to information about him. It is easier to get information in the sparsely-populated tribal areas than in the densely-populated non-tribal areas. In the past, some top-guns of Al Qaeda were found hiding in the non-tribal areas - Abu Zubaidah in Faislabad in Punjab, Ramzi Binalshibh in Karachi and Khalid Sheikh Mohammad in Rawalpindi. Many Afghan Taliban leaders were found hiding in Karachi and other places and not in Balochistan as used to be assumed. 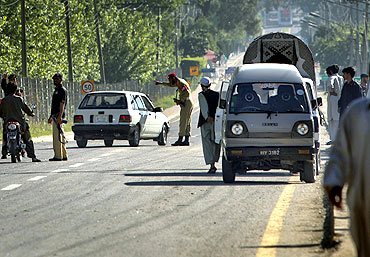 While continuing to maintain the present hunt for bin Laden in the tribal areas, it is, therefore, important to extend it to the non-tribal areas too. Karachi, which has more Pashtuns than even Peshawar, needs attention, as does Quetta in Balochistan, which has a large Afghan refugee population, who have given shelter to the leaders of the Afghan Taliban. The strongholds of the anti-Shia Lashkar-e-Jhangvi (LEJ) and the Jaish-e-Mohammad (JEM) in the Punjab and Gilgit-Baltistan are other areas calling for search. Of all the Punjabi Taliban organizations, the LEJ and the JEM are the closest to Al Qaeda.

The question of drone strikes in the non-tribal areas does not arise. The CIA cannot expect the Pakistani intelligence and police to co-operate in the search in the non-tribal areas. The CIA has to organise its own search operations with the help of anti-Al Qaeda communities like those of the Mohajirs in Karachi, the Balochs in the Quetta area and the anti-LEJ Shias in Punjab and Gilgit-Baltistan.
More
Print this
article
ALSO
READ