Sign in  |  Create a Rediffmail account
Rediff.com  » News » Why BJP has not emerged as a national alternative to Cong

Why BJP has not emerged as a national alternative to Cong

The Bharatiya Janata Party has become less of a party with a difference and more an aggregate of leaders with their own individual ambitions and agendas, says Neerja Chowdhury.

Sanjay Joshi's exit from the national executive of the Bharatiya Janata Party to placate Gujarat Chief Minister Narendra Modi, which was the real 'inaugural' of the high-profile Mumbai meet than party chief Nitin Gadkari's presidential address, constitutes the tip of the iceberg of what is going on inside the main opposition party.

First, it is part of the deal brokered by the Rashtriya Swayamsevak Sangh brass, that in return for the price that Modi was demanding -- the sacrifice of his bete noire Sanjay Joshi who has been a thorn in his side since 1995 -- he would not obstruct a second term for Nitin Gadkari as BJP president.

As a result, the change in the BJP constitution, to provide for two consecutive terms for the party president went through smoothly. When ratified by the National Council in September, it will make Nitin Gadkari the first BJP president to be party chief for six years consecutively -- something that neither Atal Bihari Vajpayee nor Advani had done.

Gadkari is trusted by the RSS chief What is going for Gadkari today is that he is trusted by RSS chief Mohan Bhagwat. That is why he was brought in as party chief in the first place. His continuation as party president is critical for the Sangh in these days of defiance and revolt, when state satraps are becoming larger than the party and are able to cock a snook at it. This is true of fomer Karnataka chief minister BS Yeddyurappa, Vasundhara Raje Scindia in Rajasthan and also of Gujarat's Narendra Modi.

The RSS and Gadkari agreed to sacrifice Sanjay Joshi, who was their person. Not only did Joshi resign from the national executive, he left the Yashwant Rao Chavan Centre premises where the Mumbai meet was going on, before Modi let it be known that he would be attending the meet.

Modi made sure he became a dominant theme of BJP meet 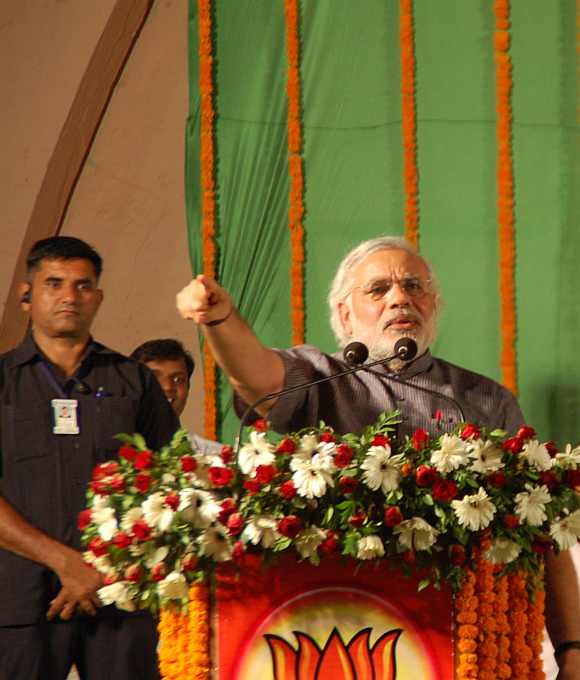 Modi was adamant that a message go to the country about who was calling the shots. Till the last moment, Gadkari and the Sangh leaders had pleaded with him that "Sanjay Joshi will be allowed to fade away" and will not be given any role in the coming months. But Modi insisted that since he had taken a public position against Joshi, the sack had to be publicly announced. Finally the party and the RSS gave in to his demand.

Modi faces elections in Gujarat this winter, which will decide his future role. As it is, there are elements within the party -- former CM Keshubhai Patel has resurfaced and mounted an open attack against him -- and the RSS which have been unhappy with his functioning and would not want him to win again. Realistically speaking, he could not afford to antagonise the Sangh or the party or to push with the politics of boycotting the national executive beyond a point.

And yet, in the way he handled the whole affair, Modi not only succeeded in ensuring that marching orders were given to Sanjay Joshi, but he also became the dominant theme of the party's apex meeting, held at a time when the United Progressive Alliance is going downhill and the BJP is seeking to emerge as the alternative. 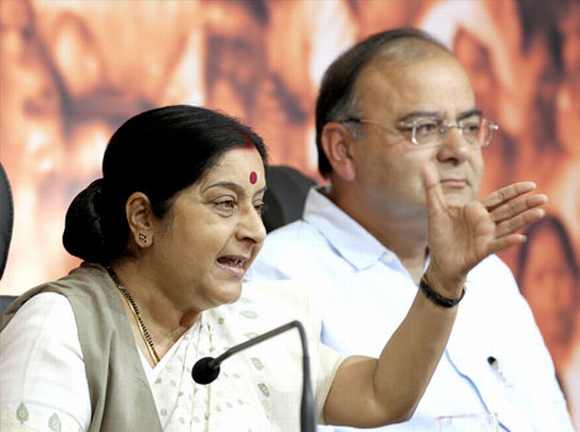 The second message implicit in the Joshi drama is the internal power struggle that is going on in the BJP. Modi is believed to have conveyed to the RSS that it should declare him as the party's prime ministerial candidate. The Sangh, though apparently not disinclined to the idea, would like to wait and watch and see how the situation emerges in the coming months. Much will depend on whether and what and how bold the steps the UPA is able to take to stem the downslide.

The UPA does not seem to have many cards up its sleeve and this was evident in its announcement of a big petrol price hike on the day the BJP started its national executive meet, and this is bound to have an all-round spiraling effect on prices.

Much will also depend on how the mood in the country evolves in the coming months and whether, after the growing dissatisfaction with the government's weak leadership, there is a cry for a strong leader from the urban middle class, which had after all contributed to the UPA's victory in 2004 and 2009.

The RSS is understood to have proposed a formula to the BJP, but it is contingent on many ifs and buts. The Sangh sees problems in projecting Modi much before the general elections, because it would galvanise the minorities behind the Congress in a national election, it will send the BJP's allies like the Janata Dal-United scurrying for cover, and it would reduce the BJP's Leaders of Opposition Sushma Swaraj and Arun Jaitley into lame duck figures in Parliament.

RSS wants Advani, Joshi to move aside in PM race The RSS would like Advani and Murli Manohar Joshi to move aside from the prime ministerial race and mentor the younger leaders. It would like Gadkari -- who too had begun to be talked about as a PM possibility -- to concentrate only on building up the organisation now. It is willing to let Modi play a role on the larger canvas if he emerges victorious in Gujarat again in 2012 winter.

The Sangh is learnt to feel that as far as the party's prime ministerial candidate goes, and this is a question the media is going to ask repeatedly, as of now, the party could take the view that "it could be any of the two LoPs, or any of the BJP CMs". Modi certainly leads the lineup of CMs. This is the way the posters also depicted the hierarchy of CMs in Mumbai recently.

The defining moment for Modi will come after the Gujarat elections. But the Gujarat CM is unlikely to leave things to chance, or the RSS or to anyone else. He is getting ready for the kill and creating his own lineup within the party, which would be loyal to him, and would act as a pressure group. It is made up of leaders who are popular at the ground level, and also they no longer want to be pushed around by the RSS.

They include Scindia and Yedyurappa, and while Scindia had threatened to quit the party if she was not accepted as the chief ministerial contender of the BJP in the 2013 Rajasthan polls -- this was a reassurance the party brass had to give her. Yeddy has been planning to float his own party if he is not reinstalled as CM. He has openly called for Modi to be projected as the BJP's PM candidate.

BJP is an aggregate of leaders with individual ambitions 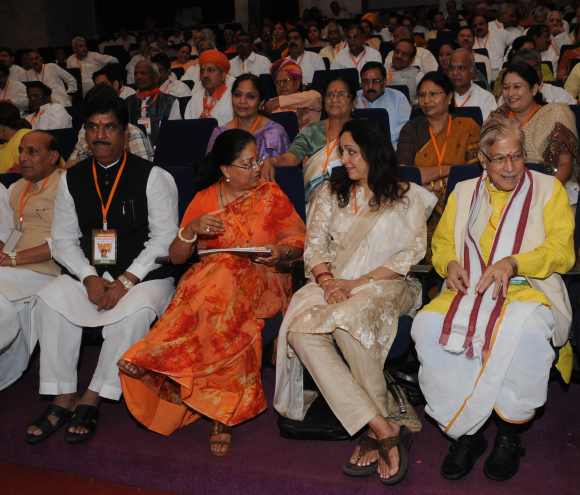 The `kiss and make-up' move by Gadkari and Modi was meant to show a united BJP in Mumbai taking on the UPA frontally. But such are the frictions within the party -- the absence of Advani and Sushma Swaraj at the Mumbai public meeting is only one straw in the wind -- that the BJP is coming across as a party at sixes and sevens. If there is one reason which has prevented it from emerging as a national alternative to the Congress, even when the ground is so fertile, it is the divisions among its leaders.

Today the BJP has become less of a party "with a difference" and more an aggregate of leaders with their own individual ambitions and agendas.