Sign in  |  Create a Rediffmail account
Rediff.com  » News » Why are Congress and Rahul mum on Omar's rule in Kashmir? 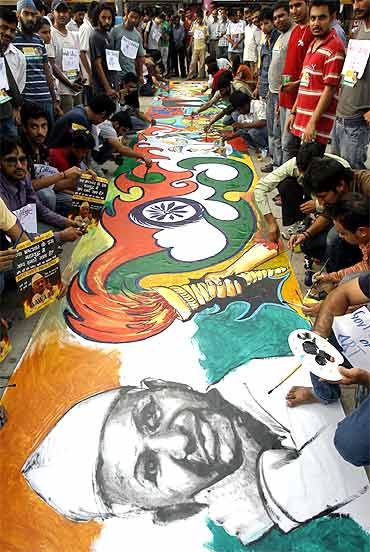 Image: Supporters of Anna Hazare paint a sketch during a protest against corruption
Photographs: Ajay Verma/Reuters

The people of Kashmir are strong enough to handle the National Conference. But what about the soul-searching Congress, asks Aditi Phadnis

The Congress has some members who are supportive of and sympathetic to Anna Hazare. They were out there in full view at the meeting of Congress Members of Parliament that was addressed by Finance Minister Pranab Mukherjee in August, at the end of the monsoon session of Parliament.

"They (party managers) are ridiculing Anna Hazare without realising that he is speaking for the people, raising their problems effectively. If the government, Parliament and other constitutional institutions do not deliver, then such agitations are bound to emerge," MPs said privately.

Rajasthan MP Prabha Thakur said, "When our children ask us why the government is being so tough with people who are asking for tougher action against corruption, we don't know what to say."

Much the same question is being asked by party members in relation to Jammu and Kashmir where the party is supporting the National Conference government led by Omar Abdullah. 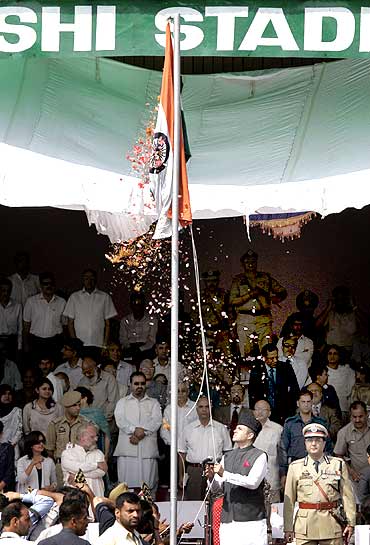 A man, Haji Syed Yousuf Shah, charged with being a "fixer" but one whom Abdullah later called a "crook", died at the chief minister's residence. The facts are as follows: Haji Syed Yousuf Shah, Yousuf Ganderbali -- a man who allegedly paid Rs 85 lakh (to whom, it is not yet clear) for a ministerial berth in the Jammu and Kashmir government -- and another National Conference worker Abdul Salam Reshi met at Abdullah's Srinagar residence, earlier in October.

The chief minister said he had summoned the three men to question them over complaints about money being taken for appointments in the government. Shah was the "fixer". Abdullah said on TV that he was "not a fixer, but a crook".

According to Abdullah, all three were handed over to the Crime Branch of Jammu and Kashmir police. When they were being taken to the police station, Shah suffered cardiac arrest and died. His relatives say he was tortured after he was put in police custody. A post-mortem says he died of a heart attack. Reshi, who was present, says Shah was vomiting when he was driven away.

The jury is out on whether Shah was a bag man for the chief minister or his family. Abdullah has handed the case over to a sitting judge of the Jammu and Kashmir high court. Those who live in Srinagar, which is where the chattering classes of the state can be found, say they don't expect much from the probe. 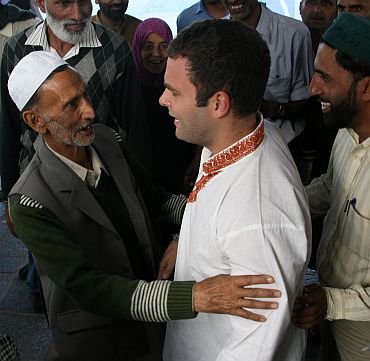 Last year, the government set up a judicial probe into custodial deaths when the figure was 17. Eventually the figure crossed 120. No one has been punished.

"In such a place, what's the big deal about one more custodial death," asks a local journalist.

The people of Kashmir are strong enough to handle the National Conference. But what about the Congress, which is going through so much internal soul-searching about corruption? The party is only an ally in Jammu and Kashmir -- in the 87-member Jammu and Kashmir assembly, the Congress has 17 seats and the National Conference has 28. At 45, they just about make the 44-member simple majority mark. The Opposition, Peoples Democratic Party, has 21 seats.

But the National Conference is not just another ally. Today, Abdullah is in an enviable position: if he seeks out a Union minister to secure something for Kashmir, the minister will cancel all his appointments and see Abdullah first. He can call 10 Janpath any time he wants, confident he will get an appointment. 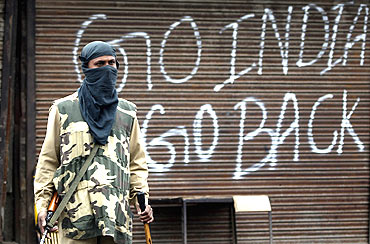 In Delhi, officially, the party has kept studiedly quiet about corruption in a government it is supporting. Unofficially, it says the alliance is safe. It is not bothered about charges and accusations because they are yet to be proved.

To start with, the Congress had an agreement where half the term as chief minister would be served by the National Conference and the other half by a nominee of the Congress. After the highly successful panchayat elections in the state, a group of Congress sarpanches met Rahul Gandhi (who was in Kashmir in September) and told him that if a Congress chief minister (according to the terms of the alliance with National Conference) was not put in place, the party's political chances in the state would dwindle to nonexistent.

To another question by a student at the Kashmir University about "his support to Chief Minister Omar Abdullah despite his failure to deliver as the chief minister of the state", Gandhi said this view was a misconception.

"I have nothing to say about it," he replied adding "the party decision is final."

"I have done nothing wrong. I have a job to do. The probe will bring out the truth," said Abdullah in a TV interview last week.