'It was a disastrous meeting with the government' 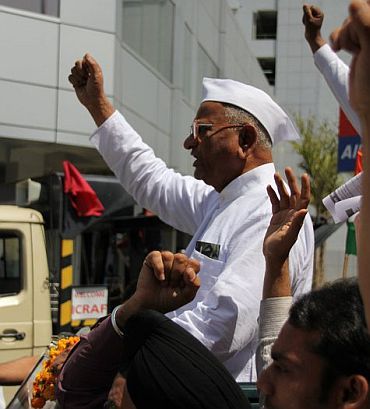 The Lokpal bill drafting committee on Monday appeared to be headed for a collision course with the government opposing demands to bring the prime minister, higher judiciary and MPs' corrupt acts inside Parliament under its purview, provoking a civil society threat to take to the streets again.

"Today's meeting was quite disastrous," a two-page statement issued by the civil society movement after Monday's meeting said giving details of the demands made and government's rejection of them.

The statement said, "Definitely, government's intentions are suspect. Please prepare yourself for the next huge movement in the country. We will go to government meetings in the next few meetings."

'If govt disagrees, we should be ready to taking to streets' 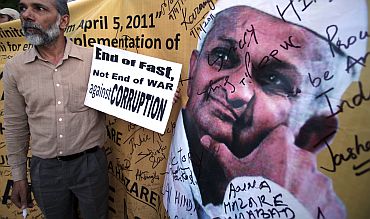 "We will try our best to persuade the government to a strong and effective Lokpal bill. But if the government disagrees, we should be ready to taking to streets," it said.

The strong statement came after the activists led by Anna Hazare, who are members of the joint drafting committee on the bill, accused the government of being 'hostile' and showing 'immensely negative attitude' to their suggestions because of which Monday's meeting ended in a 'complete disaster."

At the fifth meeting of the joint committee, the civil society activists pushed for the inclusion of prime minister, higher judiciary and MPs, including their actions inside Parliament, armed forces and entire bureaucracy under the Lokpal's ambit.

'PM's inclusion in Lokpal ambit will make him dysfunctional' 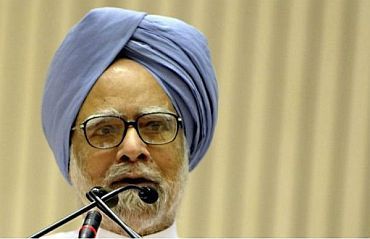 However, the government nominees opposed these demands saying inclusion of the prime minister would make him dysfunctional. They told the civil society members that they would seek views of state governments and political parties on 'issues of divergence' and get back to them at the next meeting on June 6.

Arvind Kejriwal and Prashant Bhushan, both members of the committee, said they did not agree with the government stand and if it is accepted, then it will leave only 2,000 officials under the ambit of the Lokpal.

"Today's meeting was a complete disaster. We may walk out after the June 6 meeting if there is no forward movement. If there is some positive movement in the next meeting, if there is a glimmer of hope, we will continue," Kejriwal told PTI.

Union minister Kapil Sibal, however, expressed confidence that the bill for a  strong and effective Lokpal will be a reality.

"We must provide the country with a transparent legislation as corruption is an issue which concerns everybody. We remain committed to provide the people an effective Lokpal," he said.

'The govt disagreed on everything' 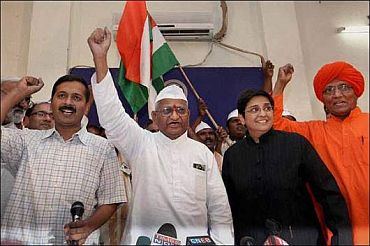 The civil society statement listed the contentious issues and said broadly the government "disagreed on everything".

The government said if any enquiry starts against the prime minister, then he would lose all authority to govern and take decisions.

Prashant Bhushan reminded the government side that in Bofors case, the then Prime Minister Rajiv Gandhi was under scanner but that did not deter him from taking decisions.

The statement said Home Minister P Chidambaram told the meeting that the prime minister's position would be weakened if there were allegations against him every other day. He was reminded that an unsubstantiated complaint would not be entertained.

Govt disagrees to inclusion of judiciary in Lokpal ambit 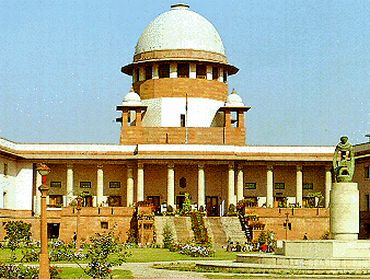 A seven member bench of Lokpal would first hear that complaint that decide whether there was an adequate prima facie evidence against the prime minister. If there were none, the complaint would be dismissed. However, government did not agree, the statement said.

Anna Hazare, one of the members of the committee, who is spearheading the campaign for a strong and effective Lokpal bill, said that he was not hopeful of the government meeting its deadline of June 30 for preparing the bill.

On judiciary, when the government said it would be out of Lokpal, the civil society side reminded it that all it was asking was power to a seven-member bench of Lokpal to decide whether an FIR should be registered against a judge or not.

On Monday, the statement said, only the Chief Justice of India has the power to give that permission. And despite so much evidence against so many judges in public domain, permission has been given only in one case in the last two years.

However, the government did not agree saying it would compromise the independence of judiciary.

"We said that the independence of judiciary was compromised under the present system which was encouraging corruption. Government said the judiciary should be dealt with under Judicial Standards and Accountability Bill which was pending in Parliament," the civil society said.

It maintained that the bill was "very bad" and would "end up protecting corrupt judges rather than punishing him". Also the bill did not talk off punishing and prosecuting corruption of judges but only talks about "misbehaviour". 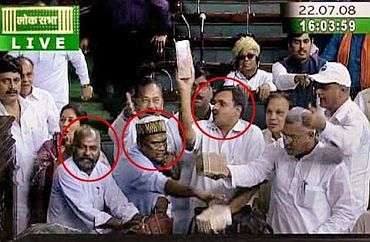 "This means that the government wants to include judiciary in a weak and ineffective bill and does not want their corruption to be dealt through a strong and effective mechanism," it said.

The government also maintained that MPs bribery inside Parliament will not be covered by Lokpal. Only his conduct outside will be covered, the statement said adding effectively therefore, all MPs will be outside the purview of Lokpal.

"Purchase and sale of MPs is endangering the very foundations of our democracy. They may be purchased not just by other parties but could be purchased by other countries and corporates. Therefore, in order to save our democracy, it is extremely important that this is covered under Lokpal," it said.

The civil society did not agree with the government view that Parliament should be allowed to do self regulation.

"We told them that this self regulation had not worked and their corruption should be investigated by some independent body. They simply refused," it said.

'Only 2,000 govt officials under Lokpal's purview' 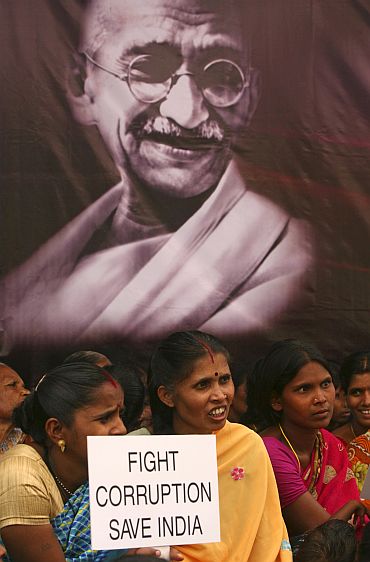 On the demand of the civil society for covering the entire bureaucracy, the government agreed that only joint secretaries and above will be covered by the Lokpal and for the rest, the existing system will continue.

The civil society argued that the existing system does not work and the whole country has risen against corruption to seek solutions to graft at all levels.

The government also refused to merge Central Bureau of Investigation and the Central Vigilance Commissioner with Lokpal saying all these agencies will continue while Lokpal have its own machinery.

"But why does the government want to keep the CBI under its control? It appears the prime minister does not want to be investigated by an independent body but will get himself investigated by CBI, which is directly under his control.

Also, CBI has been misused by every successive government to arm-twist politically inconvenient opponents. Government perhaps wants to continue doing that," the civil society said.

The only point of agreement was on public grievances when the government agreed to the concept of citizens charter and that violations of citizens would be deemed to be corruption at some stage of upscaling of a grievance.

Justice Santosh Hegde, a civil society member, then asked the government, "Then who is covered under Lokpal? And what is the purpose of creating such a Lokpal?" the statement said.

It said the Lokpal would have jurisdiction on only about 2,000 odd officers in government of India and asked whether a Lokpal was being created for investigating corruption of such a few officers.

At the start of the meeting, Hazare demanded more frequent meetings as the progress has been slow. He alleged government has been postponing discussions on even simple issues. "This way, the meetings would continue indefinitely," he said.

Sources said Sibal argued for the exclusion of armed forces and Election Commission from the ambit of the Lokpal.

The minister argued that there is a court martial system to deal with issues in the armed forces, an argument countered by the civil society side which said that there were so many allegations and the system of court martial need to be discussed.

Sources said the civil society argued that a strong Lokpal should be created to enforce ther Prevention of Corruption Act.