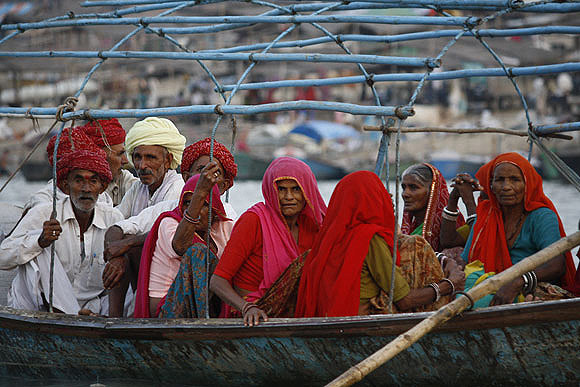 The Maha Kumbh, considered to be the largest religious gathering on earth, will begin at the Sangam in Allahabad from January 14.

Photographer Rajesh Karkera and Archana Masih capture the scenes from the ghat in the run-up to the religious festival that is the pinnacle of many spiritual dreams.

"Carrying their rations on their heads, people come with their entire families -- children and old fathers. In tractors and in trucks etc, they come to fulfill their lifetime's spiritual dream," says S K S Rathore, Senior Superintendant of Police, Kumbh.

"This river bank turns into a mela nagari (festival city) then," Rathore adds.

In his office on the Sangam Ghat in Allahabad, SSP Rathore was speaking about the Maha Kumbh recently. The Maha Kumbh, the largest religious gathering on earth, will begin on January 14 in Allahabad, Uttar Pradesh.

On the main bathing days during the 55-day Kumbh Mela, at least 60 million pilgrims are expected to bathe in the Sangam -- the confluence of the Ganga, the Yamuna and the mythical Saraswati rivers.

When the pilgrims start pouring in, the Sangam will become a city of its own.

Days before the big event, pilgrims come in as they do throughout the year. A group of women, above, had come for a dip early in the morning. The boat takes them from the river bank to the meeting point of the three rivers.

Here, for Rs 10 each, they sit on a wooden plank fastened with railings that is lowered into the water as they fulfill their spiritual quest of a dip in the holy waters.

The Siberian visitors who need no visas 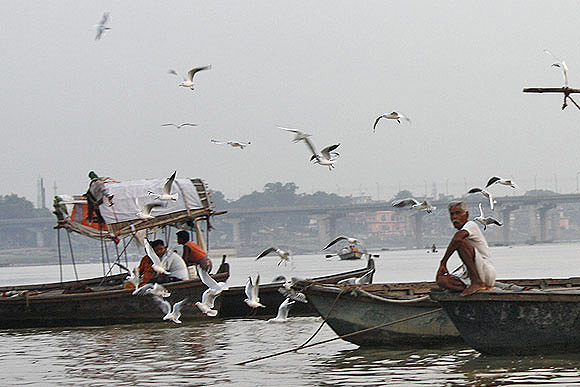 "Aao, aao, aao," is the call of the boatmen for the Siberian cranes flying low over the water.

As winter approaches, the cranes home in on these waters. Perching on the boats that ferry pilgrims -- and cans of ready-to-be-sold Ganga jal (water)).

The Sangam, the confluence of the three rivers, does not remain in one place, it shifts with the changing seasons -- leaving it to the boatmen to inform pilgrims where it exactly lies that day.

"The colour of the water of the two rivers is different and you can see where they merge," says a boatman.

The Maha Kumbh, the biggest and most auspicious of the four Kumbh melas, is always held in Allahabad.

The Kumbh police department have created a Web site and a Facebook page with information about the mega event.

'No one comes in the way of the Naga babas' 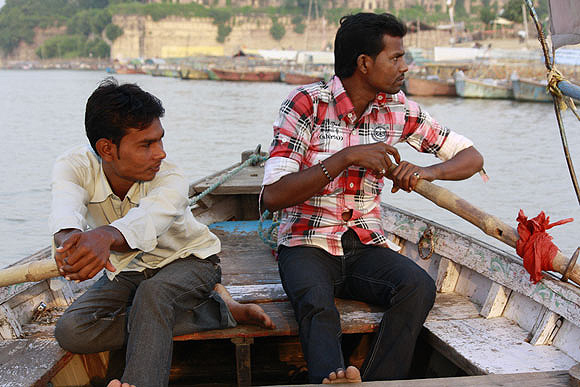 Before the Maha Kumbh begins, Ashish and Sanjay Nishad will paint their boat. Theirs is a hired boat; they pay Rs 100 of their earnings each day to the boat's owner.

During the Kumbh, the brothers earn at least Rs 2,000 to Rs 3,000 a day. With millions of pilgrims expected, they hope to do much better during that time.

"During the Kumbh, there are so many people who come to bathe in the Sangam, but because there are such big crowds they take a dip anywhere. They often cannot make it to the Sangam point because of the huge rush," says Sanjay.

About a score big akhadas, or tented enclaves where sadhus of a particular group, live have been set up.

Land is allotted by the administration along the ghat where the sadhus will live and perform their religious rites till the Maha Kumbh ends.

"The Naga babas (a legendary sect of Shiva-worshipping sadhus who cover their bodies with ash instead of clothes and are mostly seen during the Kumbh) are among the auspicious part of the Mela," says Ashish.

"When they make their way for the holy bath, no one comes in their way." 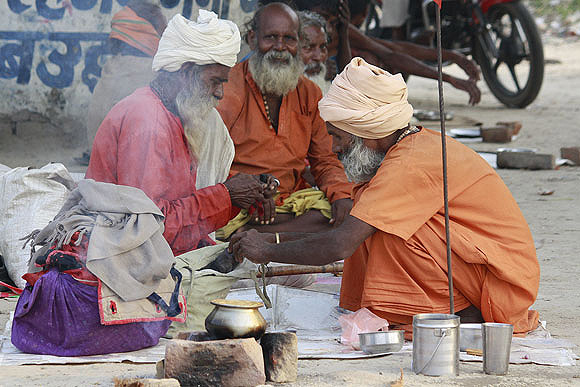 Sadhus come and sit in a row at the ghat, building a small fire to cook a meal of khidchi (rice cooked with dal).

They do not speak much with each other and keep to themselves. Kanta Prasad, in red, centre, plays the ektara, in between sips of tea.

He left his home and family in Satna, Madhya Pradesh, to take up life as a wandering minstrel many years ago. "During the Kumbh, we will change our bhesh-bhusha (way of dressing up)," he smiles.

Both at the ghat and in Allahabad city, plans are underway for the Maha Kumbh. Roads have been widened, water pipes laid, flyovers readied, beautification of parks done.

City residents feel while this has caused some inconvenience, they are hopeful it will improve the daily commute once the Kumbh concludes.

From puja needs to hing and tamarind, it's all here 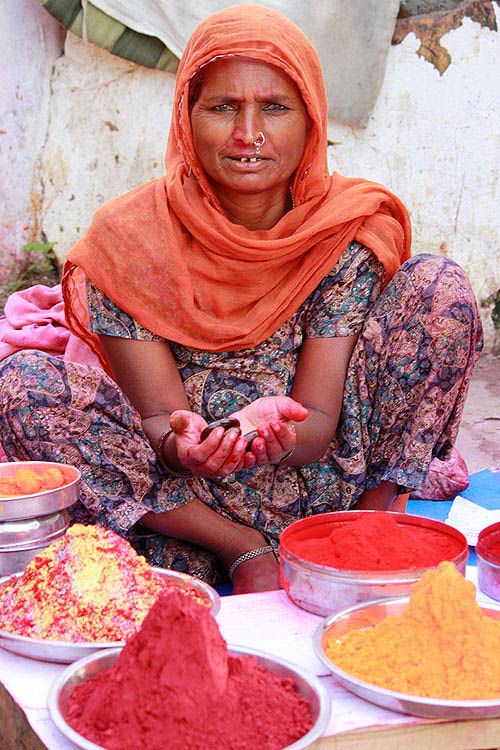 Chand Bibi, her husband Mohammad Irfan and six daughters move from their home in Barabanki to Allahabad for a few months every year to make a living at the Sangam.

In their hometown, they sell cheap imitation jewellery; at the Sangam, they sell an assortment of goods -- from puja material to hing and tamarind from the hills that can ease pain. The family will return home after the Maha Kumbh ends.

Many wandering salespeople have already arrived at the Mela site in quest of business that will help them make it through the rest of the year. Folks who have moved from Bihar, Orissa, Jharkhand to sell their wares to pilgrims. 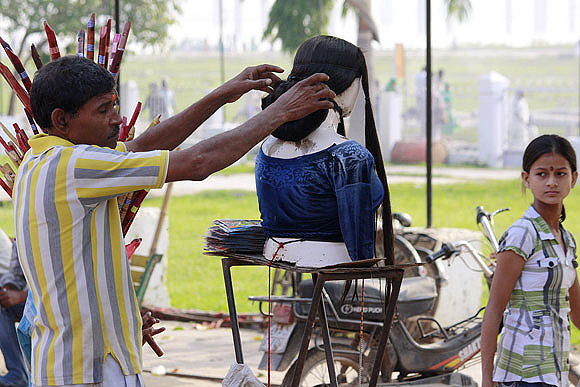 During the Kumbh, pilgrims will enter the city through 6 or 7 entry points which will serve as security checks.

The traffic police will be instructed to allow people in in a gradual manner so that no stampede occurs.

Over 100 closed circuit cameras will be deployed for the first time during this Kumbh Mela. The police force -- including both state and central forces -- will number at least 20,000 personnel. The entire Mela area will be divided into over 30 police stations.

"There will be added precautionary measures at this Maha Kumbh compared to the earlier Ardh Kumbh or Maha Kumbh in Hardwar," says District Magistrate Raj Shekhar who took charge some months ago.

River police, divers, motor boats will be deployed to prevent any mishaps during bathing, and parking space will be enhanced ten times compared to earlier Kumbhs. A hospital will be set up at the venue.

'The common man should get his due' 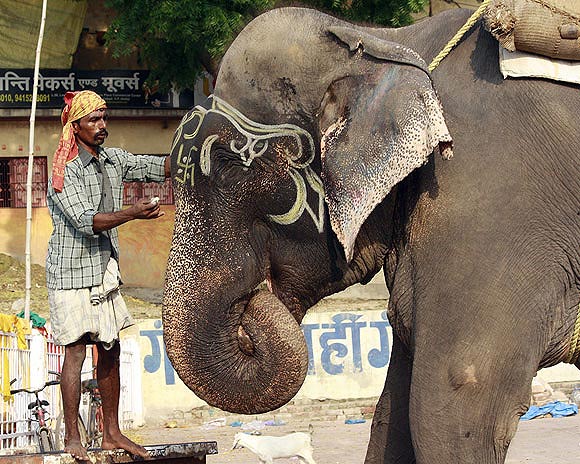 Outside the famous temple of a reclining Hanumanji, Raju, the elephant, is getting a bath and ready for the day.

When the waters of the Ganga rise, they enter the temple. The belief is that the Ganga comes this far to touch the feet of Lord Hanuman.

"Our aim is that the common man who doesn't know the hierarchy of the police, does not know the spelling of administration, should not have any hindrance in taking a bath in the holy Ganga," says SSP Rathore, who took over the post in August after serving three years in Faizabad.

"S/he should get his due, not be misbehaved with, and not be deprived of her/his right. We are training our men to be cautious, but also be courteous."

The Kumbh administration will also have in place the khoya-paya(lost and found) squads, like in previous Kumbhs for those who get lost in the crowds of millions.

'Not everyone is a terrorist' 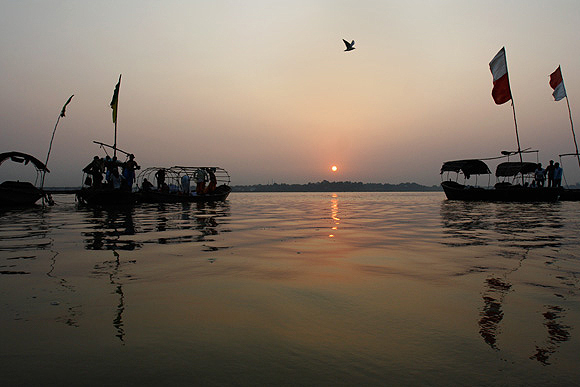 The main aspects for a successful Maha Kumbh will include security, traffic control, fire safety and good crowd management to ensure that no accidents take place and pilgrims have a secure and incident-free environment.

When asked about the security challenges to such a large gathering during a time when terror threats remain a constant reality, SSP Rathore says, "Terror is a reality, no doubt, but not everyone is a terrorist, that is also a reality."

"We have our measures. We will do physical checks at entry points. The Mela area will be divided into zones, sectors, sub sectors, micro sectors. We will have specialised teams and equipment to take preventive action or counter measures to defuse anything," Rathore adds.

"We will be on our toes all the time. Throughout."

Meanwhile, the waters of the Sangam wait, like they have for millenia, to embrace pilgrims in its holy embrace.