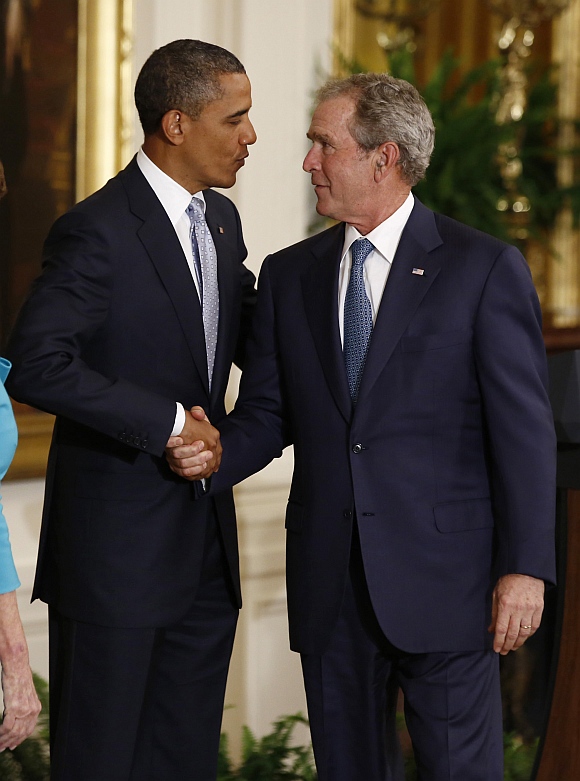 Former United States President George Bush returned to his former home, where he shared space with his successor Barack Obama, as his portrait and that of former First Lady Laura Bush was unveiled at the White House on Thursday.

Welcoming his predecessor, President Barack Obama described the White House as a living museum and an enduring symbol of American democracy.

"But at the end of the day, when the visitors go home and the lights go down, a few of us are blessed with the tremendous honour to actually live here," he said.

"I think it's fair to say that every president is acutely aware that we are just temporary residents. We're renters here. We're charged with the upkeep until our lease runs out. 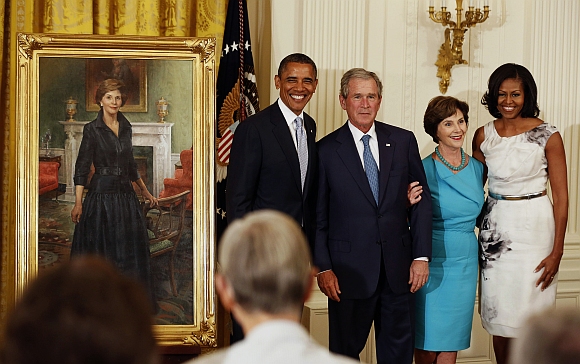 "But we also leave a piece of ourselves in this place. And today, with the unveiling of the portraits next to me, President and Mrs Bush will take their place alongside the men and women who've built this country and those who worked to perfect it," Obama said.

In the portrait, Bush is portrayed standing in the centre of the Oval Office, his right hand resting on an armchair made for the White House in 1818 by District of Columbia cabinetmaker William King, Jr.

A corner of the 'Resolute desk', presented to the White House by Queen Victoria in 1880, is seen behind the chair. Over his right shoulder hangs a 1929 western painting, A Charge to Keep, by William H D Koerner.

The President, who had used the same title for his 1999 memoir, often called attention to that painting and its significance. 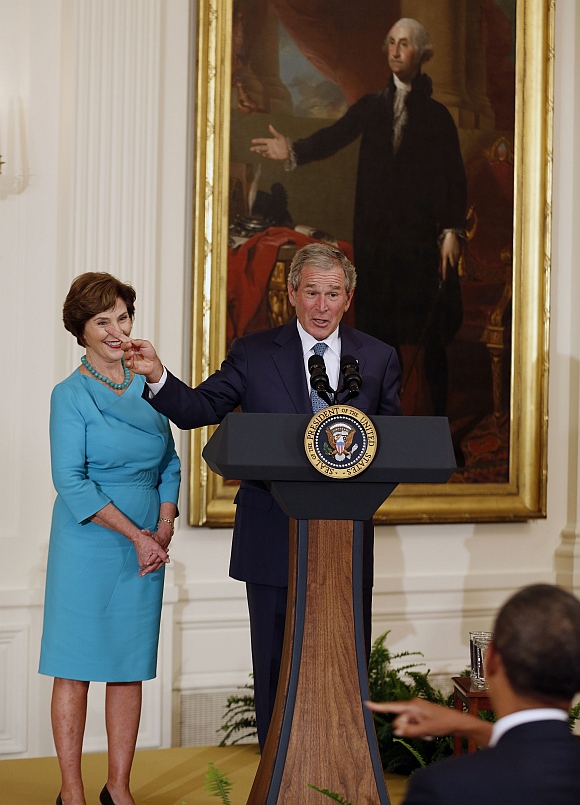 Image: Former US President George W Bush stands next to former first lady Laura Bush while speaking during the unveiling of their official White House portraits in the East Room of the White House in Washington. US President Barack Obama is seen at the lower right corner
Photographs: Larry Downing/Reuters

"I am pleased, Mr President, that when you are wandering these halls as you wrestle with tough decisions, you will now be able to gaze at this portrait and ask, "What would George do?" Bush said in his brief remarks amidst laughter from the audience.

For the setting of her portrait, Lady Laura Bush selected the Green Room, as refurbished with her active participation in 2007.

Wearing a midnight blue gown, she rests her left hand on a lyreback armchair attributed to the famous New York cabinetmaker, Duncan Phyfe, circa 1810. Federal easy chairs, among antique American furniture added to the room in 1971-72, were reupholstered in a rich salmon-coloured silk.

The 1767 David Martin portrait of Benjamin Franklin hangs over the neoclassical mantel, acquired for the White House in 1818. The portraits were done by eminent artist John Howard Sanden, who is well known for his portraits of leaders of industry and education.

As usual, the White House Historical Association contracted with the artist selected by the subjects and will donate the finished paintings to the White House as a gift of the George B Hartzog, Jr White House Acquisition Trust. 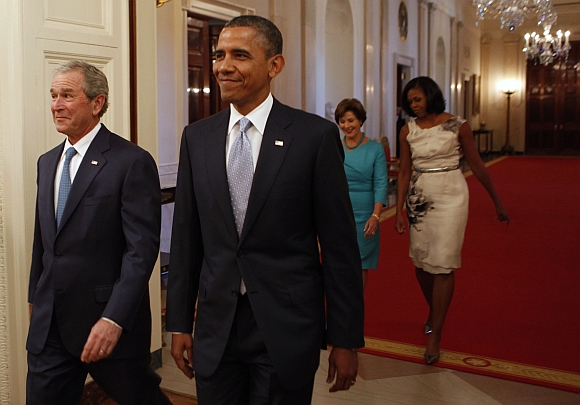 In 2010, Bush selected John Howard Sanden to execute his White House portrait. The success of the sittings and the portrait itself, completed in 2011, led Laura Bush to select Sanden for her portrait as well, finished in early 2012.

"It's been said that no one can ever truly understand what it's like being president until they sit behind that desk and feel the weight and responsibility for the first time. And that is true.

"After three and a half years in office and much more gray hair I have a deeper understanding of the challenges faced by the presidents who came before me, including my immediate predecessor, President Bush," Obama said.

"In this job, no decision that reaches your desk is easy; no choice you make is without costs. No matter how hard you try, you're not going to make everybody happy. I think that's something that President Bush and I both learned pretty quickly," he said.

"And that's why from time to time, those of us who have had the privilege to hold this office find ourselves turning to the only people on earth that know the feeling.

"We may have our differences politically, but the presidency transcends those differences," Obama said.