Whatever the challenge, we will overcome it: PM Amid continued attack on the government over corruption, Prime Minister Manmohan Singh on Friday acknowledged that the efforts to ensure transparency, accountability and probity in public life would take a long time.

Addressing a conference of chief secretaries in Delhi, Dr Singh cited a number of initiatives taken by the government to rid the country of corruption and said these had moved "substantially forward" over the last one year.

"But we still have a long way to go in our efforts for ensuring transparency, accountability and probity in public life," he said.

To achieve these goals, he said, the Centre and states needed to work together.

The statement assumes significance as it comes amidst persistent attacks on the government over corruption. The government on Thursday faced a huge embarrassment when the Supreme Court cancelled all the 122 licences for 2G spectrum allocated in 2008 as these were held illegal.

'We have moved substantially forward' 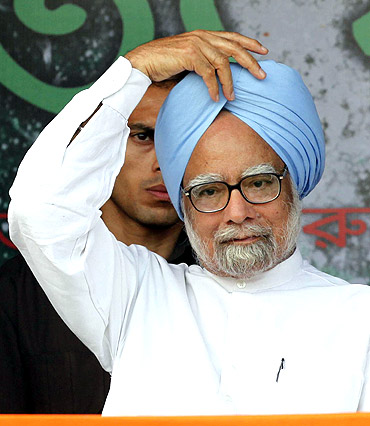 Dr Singh recalled that last year, while addressing the conference, he had emphasised the need for a systemic response that reduced opportunities for corruption in public life and had stated that his government was committed to taking all legal and administrative measures to curb the menace.

"I had also said that we should make full use of advances in modern technology to improve the delivery of our public services system. We have moved substantially forward in these areas in the last one year," he said.

Listing the initiatives to tackle corruption, the prime minister cited the Right to Information Act, the Judicial Accountability Bill and the Whistle Blowers Bill besides Citizen's Charter and the Electronic Delivery of Services bills introduced in Parliament last year as examples.

'We live in uncertain times' Referring to the Lokpal and Lokayukta Bill, he regretted that it could not be passed in the last session of Parliament and hoped the government "would soon be able to enact a strong Lokpal law".

Dr Singh noted that "we live in uncertain times" and the country faces a whole range of challenges in diverse areas.

He recalled that he had grouped these challenges into five broad categories -- one related to livelihood security, the second related to realisation of economic security, third to energy security, fourth to ecological security and finally, the concerns with national security.

'All of us have a clear understanding of these challenges' 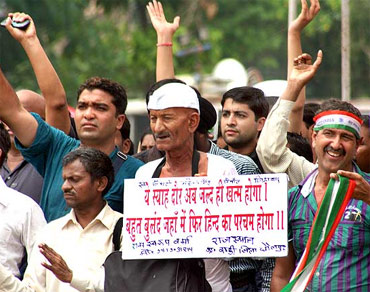 "It is important that all of us have a clear understanding of these challenges," he said, adding, "to effectively overcome them, the Centre and States need to work together."

Dr Singh said that while the difficulties should be recognised, there should be strategies to cope with them and "we must also have faith that these difficulties are not insurmountable".

Pointing out that "uncertain times" have been faced earlier also, Dr Singh said, "We have faced crises. We have faced difficult odds. But each time our nation has emerged stronger. I have no doubt that whatever be the challenge, we have the will and the ability to achieve success, provided of course that we all work together and with firm resolve."