'We will fight terrorism with love' 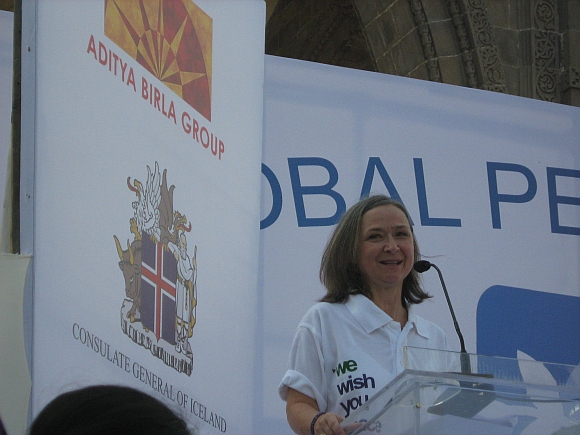 Kia Scherr, who lost her husband and daughter in the 26/11 attacks, and calls Mumbai her second home, paid tribute to the victims, a day ahead of the fourth anniversary. A Ganesh Nadar reports from the Gateway of India.

Kia Scherr lost her husband Alan and daughter Naomi when terrorists murdered them at the Trident Hotel in Mumbai on that horrific night four years ago. Scherr has responded to her personal tragedy with dignity, refusing to succumb to the urge for retribution.

On Sunday morning, the American, who calls Mumbai her second home, marked the fourth anniversary with a peaceathon at the iconic Gateway of India. The Global Peace Initiative's program was highlighted by rousing speeches and memorable song. 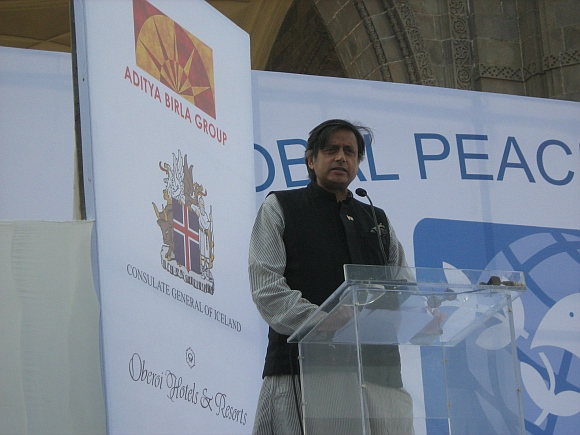 Hundreds of students, along with a children's choir, were present at the Gateway of India for the event which commenced with a moving rendition of the National Anthem by visually impaired children from the Happy Home for the Blind from Worli, central Mumbai.

Union Minister of State for Human Resources Development Shashi Tharoor, the chief guest at the event, tweeted about how moved he was by the children's performance, before delivering a rousing Tharoor-esque speech.

"Terrorists killed Indians with impunity and revealed to the world how vulnerable we were on November 26, 2008," Dr Tharoor noted. "The attack tore apart the Indian psyche and humiliated the authorities."

'The message to the killers: "You shall not prevail"' 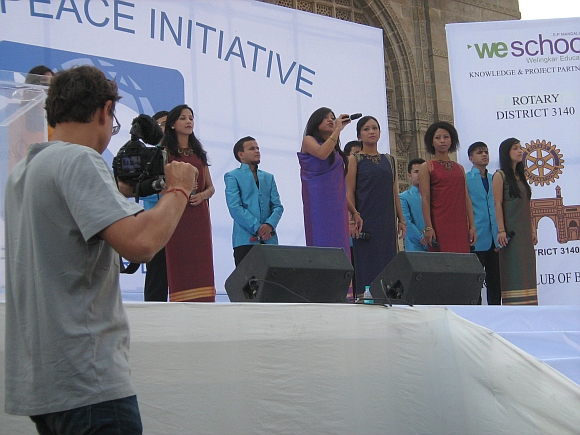 "Our security forces fought back valiantly, and some gave up their lives in the defence of the city," Dr Tharoor said. "There were ordinary citizens who rescued others and saved lives. I salute the ones who are present here," he added.

"The people came together to fight back, heal the wounds and to move forward. The message to the killers was: You shall not prevail," "Today," Dr Tharoor, who earlier served as minister of state for external affairs said, "We live in hope that the latest peace initiatives between the governments of India and Pakistan will bear fruit."

'We cannot allow people who hate to destroy our beliefs' 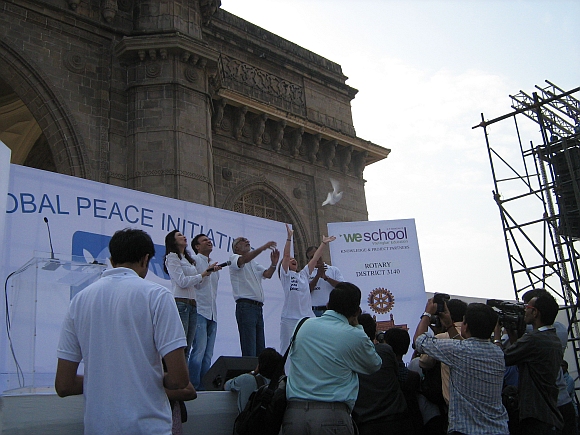 "India has learned to cope with tragedy. Indians will pick themselves through the rubble and carry on as they have done through history," Dr Tharoor felt.

"Pluralism and co-existence has been our greatest triumph," he declared. "We have risen from the ashes of 26/11. We cannot allow 'people who hate' to destroy our beliefs," Dr Tharoor, who handled conflict resolution during his long career at the United Nation, said.

"In the face of this, we must assert the power of love. We must have peaceful co-existence in this subcontinent, or the terrorists would have won," Dr Tharoor said to loud applause.

"For India to remain as it is, it must realise the multiple Indias within," he said. "We bow our heads in mourning today. Let us raise them with hope again -- Jai Hind."