'We have awakened the public against corruption' 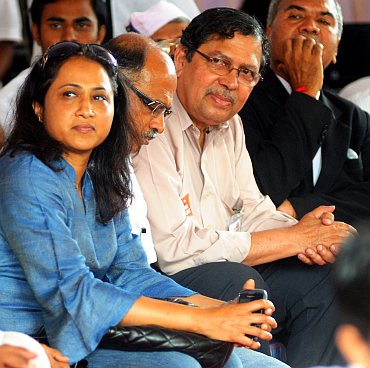 Justice Santosh Hegde has become a very popular face at the protests against corruption at Freedom Park in Bengaluru.

He has been leading the protest for the last few days and has not budged from his place at the park. Justice Hegde, who retired as the Lokayukta of Karnataka after presenting the explosive mining report, was one of the civic society representatives of Team Anna Hazare on the panel to draft the Lokpal Bill.

Justice Hegde, who was pessimistic about the actions by the Union government, however, says that he hopes the government will bend following the groundswell of support the movement has been getting all over India.

In this interview with rediff.com's Vicky Nanjappa, he says that it is sad to see that people are calling Hazare a dictator. "These are desperate attempts after the government has failed to take any sort of action," he says.

'Whoever said Hazare is a dictator is a fool' 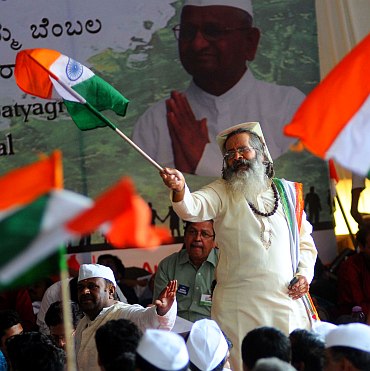 Are you hopeful that there will be a logical conclusion to this movement?

No one expected that there would be such a huge response. We have been getting overwhelming support from across the nation and looking at the manner in which things are moving I am very sure that the government will bend.

Some say Hazare has been acting like a dictator and that he cannot impose the law on the government. What are your thoughts?

Whoever has said that is arrogant and a fool. Are we making the laws? We are giving suggestions, because all of us have a right to do so, and laws affect the common man. If you remember, we had a long drawn deliberation process, and the government finally presented a watered-down Bill in Parliament.

The people are unhappy with it and hence we are making demands for tougher provisions. Hazare is on the right path, and his demands are valid. Calling him a dictator is foolish.

The government says that such matters have to be discussed in Parliament, and only then a Bill would be passed. The accusation is that a law cannot be imposed on Parliament.

We all understand what the process is. This is a democratically-elected government, and if the people want to make suggestions, then there is nothing wrong in it. Hazare or any of us are not fighting any personal battle. We are doing it for the people.

Why did the government not send our version of the Bill to the standing committee of Parliament (which will discuss the Bill)? Now who has violated procedure?

'No one is saying Parliament is not supreme' 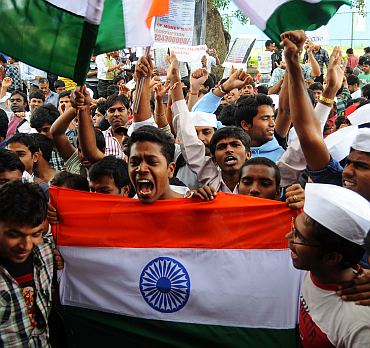 Do you think Hazare has a personal agenda in all this?

What personal agenda? Can anyone point out what the agenda is? I can say confidently that this is just in the public interest.

Do you think that a right precedent is being set by overriding Parliament which according to the Constitution is the supreme body?

No one is saying Parliament is not supreme. They have the right to make laws. However, the Constitution also gives us the right to question the decisions made by Parliament.

Just because it is the supreme body does it give them the right to make any law? And even if it is arbitrary should the entire nation abide by it?

The government has some audacity to tell us to keep our mouths shut on the ground that Parliament is supreme. Everyone has the right to challenge the laws made by Parliament. There is a Supreme Court which can scrutinise the actions of Parliament

Do you think you should have waited for Parliament to pass the Bill and then gone to the Supreme Court?

We can do that, but there is nothing that stops us from voicing our opinion at this point of time too. This is democracy.

'Nilekeni has his views, I have mine' 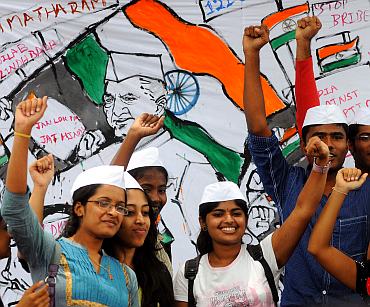 Today, Nandan Nilekeni said one law is not enough to fight corruption. What are your thoughts about that?

I do not want to comment on that since he has his views. I have my views, the people have their views.

But honestly, will one Lokpal Bill end corruption? Who are we fooling?

It may not end corruption, but it would be the right start. What needs to be understood is that a movement has gained momentum and the government cannot act as per its whims and fancies.

A couple of months ago, when we had spoken you said that it is very important that the prime minister and judiciary are included in the Lokpal Bill. Today you say something different.

Is it a compromise?

No, it is not. I am not speaking about give and take here. As I said we are ready to discuss. If they want us to give up on two issues, then let them agree on the other six. There was a disagreement in respect to eight issues.

'The entire nation has woken up' Is this an individual decision or is the entire team in agreement?

This is my thought for now and I feel I can convince the rest of the team members. I cannot say they will agree, but I could try, but again the government has to agree to the other six.

Do you think the government will agree to the rest of the conditions?

I am pretty sure that, for the moment, they will not.

We do not see a majority of the team sharing your point of view. Is each one on his own trip?

No that is not what it is. The entire team is united. There can be differences within a family. Does that mean the family has broken up?

This has happened many times in the past with such movements. There is a furore and then the fizzle. What do you see of this movement?

I am sure it will not fizzle out although many would want it to. It is just the beginning and the entire nation has woken up. The movement will only grow stronger in the days to come.

What is most important is the awakening of the public against corruption. A fast at Ramleela or Freedom Park may not end corruption, but it is just a start.