'We are ready to lead UP into a new dawn' 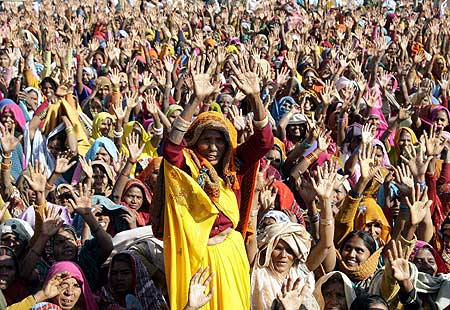 'Both Mulayam Singh and Mayawati have done no work. Their MLAs disappear after the election and don't show up in five years. Now they are back, folding their hands and touching our feet, asking for our votes.'

At first, Sohan Lal would not give his full name, nor talk about what he does for a living, nor where he really hails from.

"Bas yahin, (just, here)," he said, waving his hand in an indeterminate, upward sweep, his eyes focussed on the large parade ground in front of the tea shop, in Allahabad, where Congress President Sonia Gandhi was going to show up for her election rally last week.

To persistent questioning, he relented, reluctantly. "I am a labour contractor hired to clean the ground for the rally."

To the unasked question, whether he is a Dalit or not, he nodded with an imperceptible movement of his head.

Slowly, Sohan Lal sidled up on the tea shop bench. "In Banda, where I am from, we have all decided that we will not vote for Mayawati this time. All these leaders, we have seen them all, both Mulayam Singh and Mayawati, they have done no work. Their MLAs disappear after the election and don't show up in five years. Now they are back, folding their hands and touching our feet, asking for our votes," he said.

"This time," he added, "we have decided to give the Congress party a chance."

Across eastern UP, home to as many as 150 constituencies in the 403-seat legislature, a social churning is visibly taking place. If in the 2007 assembly election, Dalit messiah and Bahujan Samaj Party leader Mayawati invoked Dalit pride to avenge centuries of humiliation by the upper castes to coalesce the substantial Dalit vote -- averaging at 20 per cent, although as high as 35 per cent in areas like Sitapur -- on which she built the 'sarvajan' or a multi-caste rainbow coalition, it is equally true that in 2012, some of those committed Dalits are peeling away. 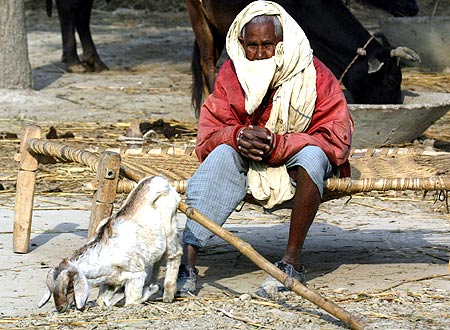 In a state as deeply divided along castes and sub-castes, the first surprise in this UP election is the insistence that 'progress' and 'development' must play a role when the vote is cast.

Eastern UP must count among the poorest regions of the state, with its mud hovels, hardly any electricity to light up those villages and its angry, young men thronging the streets with hardly anywhere to go.

But as always, hope is the first casualty of brute reality. Caste matters, because memories of the 'goonda raj' under Samajwadi Party leader Mulayam Singh Yadav's rule, who was overthrown by Mayawati in 2007, are still fresh in several Dalit homes.

Many Dalits insist that there is still no one except 'Behenji' to protect them from the oppression of the caste just above them in the rigid hierarchy, the Yadavs.

And for the first time in many years, admits a Samajwadi Party leader on the condition of anonymity, "the policemen in the local 'thana' (police station) or 'tehsil' (a unit of villages) began to listen to the Dalits and the atrocities that have been heaped upon them." 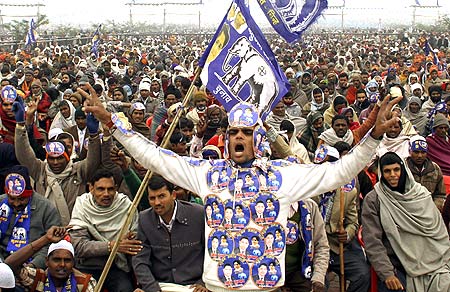 In the last five years, several Dalits have also invoked a piece of legislation they call the 'SC kanoon' or 'Scheduled Caste law,' which empowers them to complain against anyone making a caste slur.

In Bhadohi district alone, over a hundred such instances of Dalits invoking this legislation, which attracts a stiff penalty up to Rs 25,000 and even some time spent in the local police station cooling anti-Dalit ardour, have been counted.

As a result, Bhadohi's Muslims say they will either vote for Congress candidate Tanveer Hussain -- who hails from a respectable, carpet business family in the area -- or local Samajwadi party candidate Zahid Beg.

Several admit the Congress is a new force in the area, but when the votes are counted, Tanveer could make the cut, also because of his family credentials.

In Paharpur Kala, in Saidpur constituency on the road from Varanasi to Ghazipur, Samajwadi Party supporter Mohammed Anwar relates the story about Amerika Pradhan, the sitting BSP MLA, who was garlanded by a string of chappals when he went to the village to ask people for their votes.

"It was the 'chamars' who were furious with their own caste brother," Anwar said, his blue-grey eyes flashing with anger. "If we had garlanded him with shoes, don't you think hamaare upar SC kanoon lag jaata? (we would have been punished by the SC law)?" he asked.

'Yadavs are just above the Dalits in Hinduism's rigid caste hierarchy' 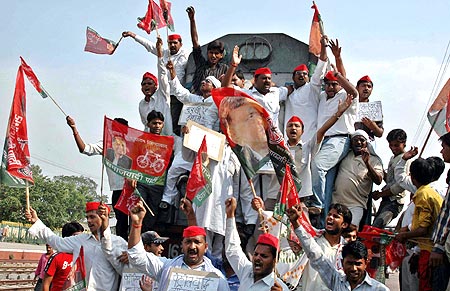 Meanwhile, many of those BSP MLAs elected in 2007 have adopted the ways of the macho Yadav and upper-caste men. They drive around in flashy Scorpios, descend upon a town or village armed with weapons with the intention to scare, not kill.

In Azamgarh, chief of bureau of the Dainik Jagran newspaper, Hari Shankar Pant noted that this time around, "the situation is likely to be reversed from what it was in the 2007 election. Then, 60 per cent of the 10 constituencies in this district were won by the BSP, because of the people's anger against SP 'goondas' who asserted their muscle power. But in the last five years, the BSP MLA has done exactly the same thing."

"The people now believe it is their turn to be punished."

This is not to say that the BSP is not fighting back. Certainly in Azamgarh, local pro-Muslim outfits like the Peace Party and the Ulema Council, who built a reputation around the Batla House storming incident in Delhi, are falling by the wayside in this coming confrontation between the BSP and the SP.

In fact, candidates like Irfan, son of the much-vaunted Dr M Ayub of the Peace Party, may not even win Mubarakpur, the constituency which has been carefully nurtured by his father.

In Delhi, Sudha Pai, political analyst and professor of political science at Jawaharlal Nehru University, explained the dynamics at play. "The caste oppression by the Yadavs against the Dalits is particularly high because they are both competing for the same resources; and the Yadavs are just above the Dalits in Hinduism's rigid caste hierarchy, where the caste oppression is the worst."

'People are fed up with Mayawati' 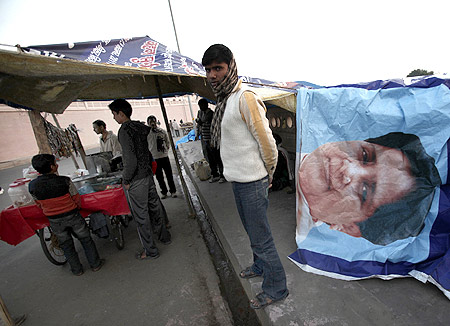 The social churning is also evident on the banks of the Sangam -- the union of the two holy rivers, the Ganga and the Yamuna -- in Allahabad, where the boatmen caste, the backward Nishad who voted for Mayawati in the last election, have decided to desert her for the Samajwadi Party this time.

Their anger against Mayawati is straightforward. She hasn't allowed them to fleece devotees who want to take a dip in the holy waters and wash away their accumulated sins.

"She has done nothing for us, we weren't allowed to charge anyone wanting to take a boat ride right up to the Sangam," said Ram Nishad.

Evidently, the charge was supposed to be Rs 60 per head, while the boatmen were sometimes demanding Rs 2,000 from every devotee.

Then there was the policeman, guarding Sonia Gandhi's Allahabad rally with a 'Vajra' truck which contained tear-gas, rubber bullets and other paraphernalia required to deal with recalcitrant protesters -- whose last name on his breast-pin announced that he was a Yadav by caste.

Yadav needed little encouragement to explain that the 89,000-strong police force in UP was deeply upset with Mayawati because she had increased the number of years of service for a policeman before he got a higher grade -- and therefore, better pay -- from 16 to 18 years, 24 to 26 years and 30 to 32 years.

Moreover, she had made changes in the transfer policy, which had meant that he could be posted in Allahabad, while his family had to stay on in Varanasi because that is where the family home was.

"How can I be separated from my son?" Yadav, the policeman, wailed.

Admonishing this reporter for asking questions from a policeman, he added that his sympathies "naturally" lay with his fellow caste-brother, Mulayam Singh Yadav.

"The people will vote for the Samajwadi Party," argued Shahid Siddiqui, political activist and journalist, who recently returned from the BSP to the SP, "because they see us as the major alternative. They are fed up with Mayawati. Moreover, the Samajwadi party has reinvented itself. We are ready to lead UP into a new dawn."