In the land of don'ts 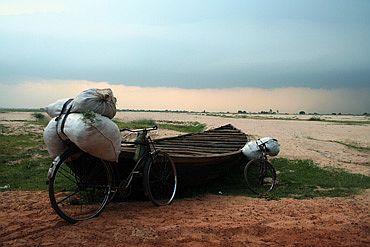 Rediff.com's Sanchari Bhattacharya visits Jhargram and Jungle Mahal, one of the most volatile areas of poll-bound West Bengal, and tries to figure out whether the 'winds of change' would blow away 'the red bastions'.

These were among the plethora of well-meaning pieces of advice gathered from a host of colleagues, journalists and family members as we headed to West Midnapore district in Bengal.

The reason behind this list of dos and don'ts?  West Midnapore, along with the districts of Bankura and Purulia, makes up Jungle Mahal -- the forested, tribal-dominated and under-developed vast stretch that has become a hunting ground for both the Maoists and security forces.

The district has made plenty of headlines in the last few years, and for all the wrong reasons. In November 2008, Chief Minister Buddhadeb Bhattacharjee's convoy narrowly missed being blown apart by a landmine in Salboni.

Later in the same month, Maoists took over the entire area of Lalgarh and set up a local administration for eight months there till joint forces sent by the Centre flushed them out in June 2009.

In November 2010, nine villagers were killed in firing allegedly from a Left Front leader's house in Netai village.

As one local activist observed wryly, "There is so much violence here, ke kaake maarche bojha jaaye na (nobody knows who is killing whom). 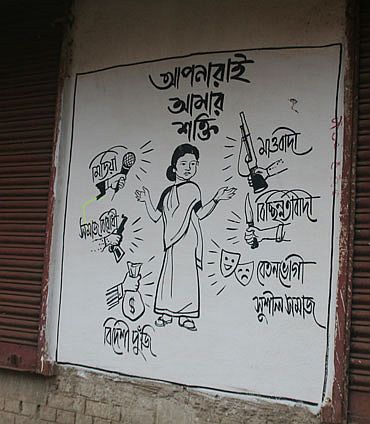 Conspiracy theories abound here; there are multiple versions of every incident.

The ruling Left Front claims that the Trinamool Congress has joined hands with the Maoists to dislodge them from power.

The Trinamool claims that the Communist Party of India-Marxist's harmads (armed cadres) are terrorising the locals.

The Maoists, meanwhile, have slammed both the political parties for their failure to work for the local tribals who live in dire poverty.

Taking no chances at all, the Election Commission has saved the toughest for the last. Fourteen highly sensitive constituencies in Jungle Mahal will go to polls on May 10 -- bringing the curtains down on the six-phase elections in the state that started on April 18.

The EC has reason to be worried. A recent survey carried out by the state administration showed that over two lakh voters were scared of coming out to vote in the volatile constituencies. The final outcome of the polls will be decided by how many people actually dare to vote.

Explaining the security arrangements in the area, Joint Chief Electoral Officer Dibyendu Sarkar told rediff.com, "We will post a section of security forces in each polling station in Jungle Mahal. We will also mobilise forces across all the constituencies in the area, so that voters feel safe to come out and vote. People had turned up in large numbers during the polls in south Bengal in spite of the political violence in that region. I am sure even Jungle Mahal will witness substantial voting."

'Media has portrayed Jhargram as the most unsafe place' 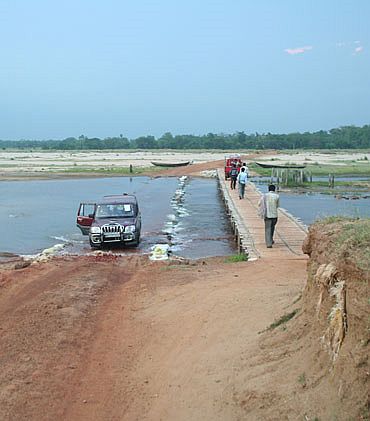 We are on our way to Jhargram, a former tourist haven that has lost much of its sheen. The serene forests and lush green landscape here make it hard to believe that Jhargram regularly hits the headlines for 'Maoist violence'.

A local businessman admits that the once bustling town -- a favourite location of Tollywood film-makers -- is going through a rough patch. And he blames the media, not Maoists, for the loss of business.

"The media has portrayed Jhargram as the most unsafe place on the planet. When violent incidents happen in the interiors, far away from the town, they make it sound like this is the centre of all the action. The tourism business here has withered away, thanks to the hype created by them," he rues.

But once we leave the peaceful confines of Jhargram to explore other villages in the constituency, it is apparent that all is not well. We are forced to take a much longer detour as the Maoists have blown up a bridge on the regular route.

We are told that the remarkably well maintained road our vehicle is gliding on was built only so that the security forces could march through the countryside and recapture Lalgarh.

'Locals face the worst of both Maoists and security forces' 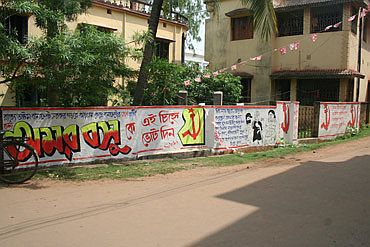 We pass a sprawling, formidable camp set up for the personnel of the Central Reserve Police Force, one of whom glares at us as we try to slow down for a photograph.

We pass through scores of anonymous villages with similar characteristics. On the colourful walls of the thatched huts, Trinamool's green and orange is competing for space with the CPI-M's red.

Most houses either don't have electricity connection or seem to be in the throes of a perpetual power cut. And the local villagers, who continuously help us with directions as we keep on confusing our way, range from reed thin to skeletal.

"The locals in Jungle Mahal face the worst of both the security forces and the Maoists," says Bolan Gangopadhyay, an author who was actively involved with the people's movement in Singur and Nandigram.

"Maoists hide in their houses and demand to be fed. These villagers barely have food for themselves, how will they feed the Maoists? Once they leave, these families are targeted by security forces, which claim that they are in cahoots with Maoists," she explains.

Deriding the ruling Left Front government for its apathy, Gangopadhyay says that barely a fraction of the central funds granted for the development of these tribal areas is spent here. The rest, she alleges, "goes into the pockets of the leaders of the ruling party."

She is not the only one levelling such accusations. A journalist who has been tracking the events in Jungle Mahal for the last couple of years says, "You should see the houses these leaders own here. They own mansions in an area as impoverished as this. These people never get to see any of the money sanctioned for them."

'People's expectations are always higher than what we can deliver' 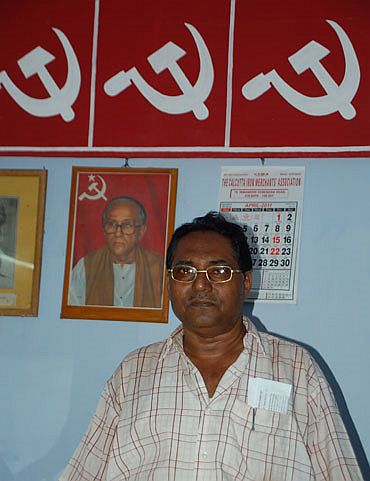 But Amar Basu, the local CPI-M candidate and the sitting legislator, dismissed these allegations as "planned anti-Left propaganda".

"People who say there has been no development are lying. They are just a bunch of people who have been misguided by our opponents. Before we came to power, the Congress ruled the state for 30 years. They couldn't even guarantee food security for the people, but we have done that. Show me a village where there is no pucca road, no health centre, no electricity," he said.

When we told him that we had come across many such villages, he shot back, "Listen, there is no end to development. People's expectations are always higher than what we can deliver, they always want more."

Ramendra Nath Kar, the local committee secretary of the CPI-M, points out that Basu had received over 50 percent of the votes polled in the last assembly elections. "People judge us by our actions, not by your media reports," he said.

'CPI-M is involved in every kind of crime'

To counter the ruling party's iron grip, the Trinamool has launched its campaign in fourth gear with their biggest and probably only selling point -- party chief Mamata Banerjee.

She smiles stiffly and waves from posters that have been put up all across the constituency. Sukumar Hansda, the local candidate, also appears alongside the party flag in a few of them.

The party will win "not 100%, but 1000%," believes Hansda, but only if, "the CPI-M's harmads allow free and fair polls. The people have welcomed our ideology of Ma, Maati, Manush."

What will be the first step he will take if elected? "I will ensure peace here. The CPI-M is involved in every kind of crime possible -- murder, mayhem, extortion, robbery and rape. Young men are kidnapped from their homes in the middle of the night; mothers and wives have lost their sleep. We will free them from this reign of terror."

But he is evasive about whether the joint operations against Maoists will be halted if the Trinamool comes to power. "Mamatadi is an able leader; I am sure she will take the right decision on the issue," he said diplomatically.

'There will be change' 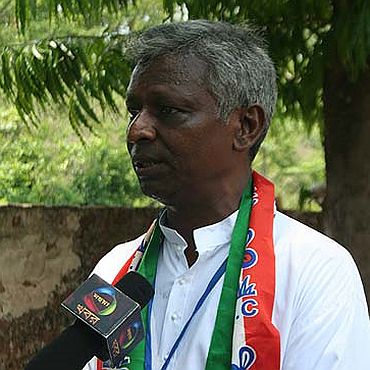 Both the CPI-M and Trinamool were taken aback when the newly launched Santrash, Durniti, Shamrajyobadi Agrasan Birodhi Mancha fielded Chhatradhar Mahato, a local tribal leader who has been jailed since September 2009 for his alleged link with Maoists.

Mahato is expected to cut into the vote share of the Trinamool, which is considered to be sympathetic to the Left-wing ultras. Not surprisingly, both political parties claim that the former leader of the now disbanded People's Committee against Police Atrocities is working secretly for the other.

Jhargram is teeming with Bengalis who, like their brethren across the world, are eager to share their wisdom and insight about the world of politics.

"Poriborton toh hobei (there will be change)," says one of them, confident that Trinamool Congress chief Mamata Banerjee's favourite phrase will find a resonance here.

When queried if Banerjee and her party are likely to perform better than the Left Front if they come to power, one of them told us, "At least she will be eager to prove things and she will try her best initially. That means a good government for five years, and that is more than we can ask for."

His friend cautions him that one can never predict the ways of the electorate, adding, "And don't underestimate the ingenuity of the members of political parties, who will surely find new ways of rigging the elections."