States benefitted the most under UPA rule: Pranab 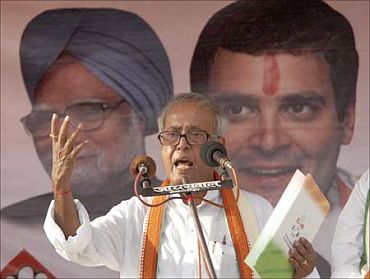 During his whirlwind election tour in Tamil Nadu, Kerala and Puducherry, Finance Minister Pranab Mukherjee, also the United Progressive Alliance's chief interlocutor, tells Saubhadra Chatterji the government has its own way of moving against corruption.

You have finished campaigning for your party in Assam, Tamil Nadu, Puducherry and Kerala. What seem to be the dominant poll factors?

Assembly elections are generally fought on the basis of local issues. Apparently, there is no concurrence of issues in these states.

In Assam, the main local issue is insurgency and the influx of illegal migrants. But these are not relevant in Kerala. But the over-arching theme for our party will be development.

I agree the elections are taking place after this issue of corruption came to centre-stage. But these elections nevertheless would have taken place during this time, as there is a constitutional requirement to form new governments.

Never ever the states benefitted in this way as it did during our rule.

'Despite Central assistance, WB, Kerala have a massive debt burden' 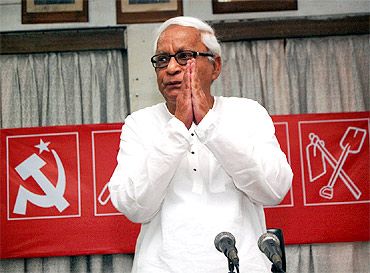 Is that the reason why, as the finance minister, you are mentioning statistics and financial performance of the states?

Statistics, of course, show the performance in the respective fields. We want to show how the Congress or our partners in the government have fared well and how the non-Congress governments performed poorly.

The Kerala government got Rs 485 crore as an additional central assistance in 2009-10 and 2010-11 each for the Jawaharlal Nehru National Urban Renewal Mission. But how much did it spend? Just Rs 60 crore and Rs 81 crore, respectively.

'Action against corruption is a continuous process' 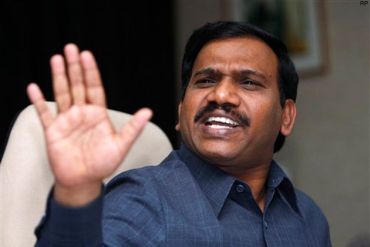 But beyond these financial statistics, there is also the issue of corruption. Your government will be facing these elections after the scams over allocation of 2G spectrum, organising the Commonwealth Games in 2010 and many other issues.

We have already taken steps to tackle these issues. The Opposition started shouting about the 2G scam in October 2010 and stalled an entire session of Parliament.

But the Manmohan Singh government had ordered a Central Bureau of Investigation probe on this issue in 2009.

One also needs to understand that a government works in its own way. There are courts of law in this country and the government has to work in accordance with law.

It is a different thing to level allegations and disrupt Houses or light candles but it's another thing to ensure the culprit is punished by the court of law.

Take the case of the alleged Bofors scam. For 18 long years, the Opposition cried foul and hurled charges against the Congress. But what happened finally?

Not an iota of charges could be proved in a court of law. Finally, it is entirely on the electorate to decide whom it wants to choose.

I don't want to take the names, but in Jharkhand a political party came to power even while it faced serious allegations of corruption. A Member of Parliament got elected from that state while he is still in jail on charges of corruption. Action against corruption is a continuous process.

'The Lokpal bill is not a new issue' 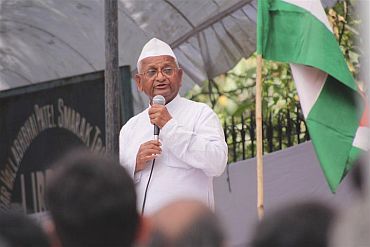 But Anna Hazare's agitation forced the government to accept his demands on the Lokpal bill. It would not have been possible if he didn't sit for his fast unto death.

The Lokpal bill is not a new issue. The first Lokpal bill was introduced in Parliament in the 1970s. Subsequent governments also tried to implement the bill.

Now the media is suddenly highlighting the issue but please remember that the biggest hurdle in passing the bill is the lack of consensus among political parties.

We always welcome suggestions and demands of civil society, as they play a very important role in the democratic set-up of this country but it is the duty of the legislature to form new laws of the country.

Elected representatives are the only people who have direct accountability to the people as they get elected through votes.