Sign in  |  Create a Rediffmail account
Rediff.com  » News » Was freedom won so that corrupt could loot India?

Was freedom won so that corrupt could loot India? 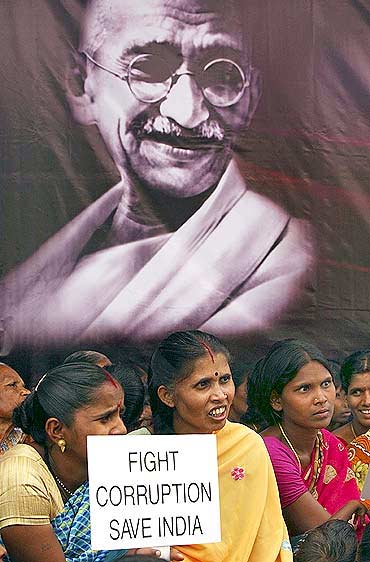 That corruption has been eating into the vitals of India's economy is by now a foregone conclusion. It has also subverted, to a large extent, the political system and the parties that run it and most of the institutions of India, writes Prem Prakash.

The year gone by has made the people of India wonder whether independence was won only to make politicians and the corrupt indulge in the loot of India's wealth and resources.

The loot has gone too far 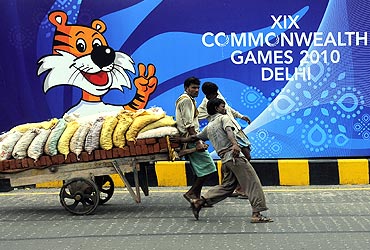 Image: Labourers pull a hand cart loaded with bricks and sacks of sand in front of boards advertising the 2010 Commonwealth Games, over a flyover, in New Delhi
Photographs: Mansi Thapliyal/Reuters

The scams that have unfolded recently, perhaps, tell only part of a huge story of loot. An imperial power took over India's governance after the mutiny by sepoys of the East India Company failed in1857.

The event was also the beginning of India's war of independence. On taking over the administration of India, the British Crown promised rule of law.

As the government machinery began taking shape, they also established an organisation today known as Comptroller and Auditor General of India. The idea was to keep an eye on their own people that India's finances were well managed.

The founding fathers of India gave the office of Comptroller and Auditor General a constitutional position independent of the executive, as they too were interested in keeping tabs on India's finances and resources.

What it exposed last year in the 2G and the Commonwealth Games scams, has warned the people of India that the loot had gone too far and that India was now being taken over by corrupt politicians in alliance with corrupt bureaucrats and businessmen.

India's free economy should have been a check on corruption 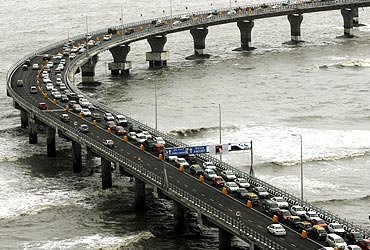 It is interesting to note that since the unshackling of the economy from the 'licence permit raj' an Indian version of communist style state control, the growth of a few well established industrial houses has been phenomenal.

A huge middle class of well paid employees has been created for these hugely prospering Indian houses and foreign companies that have moved into India.

India's natural resources, be it mines or, land or ports are being exploited by those who are in alliance with the political masters. Small and medium businesses and industries are going out of business.

Small shops and retail outlets are being killed to help giant super markets grow. India's free and competitive economy should have been an automatic check over corruption.

Wherever you look today, you find a scam Yet, it is in the unshackling of the economy, that scandals and scams of huge proportions have erupted. Look at the manner in which the government divested hotels at throwaway prices?

Have a close look at the private public partnership model in the development of highways or the ports? The kind of loot being garnered by the so called private investors and builders of these highways in the form of toll fees should have set alarm bells ringing.

That has not happened, as the politicians are fully behind such projects. Why do we pay road tax if we are to pay toll fee to use the roads? Wherever you look today, you find a scam. 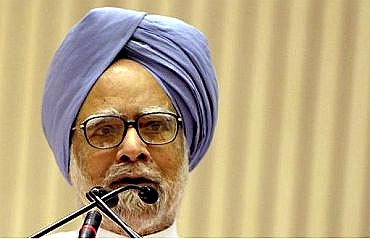 When the ruling elite itself indulges in loot, how can you expect junior functionaries of the government to stay aloof?

The only way they can make money is to make life miserable for the common man.  If you want to approach a government department to obtain a birth or death certificate, refund of excess tax paid by you, or get property tax assessment or land registry, you have to pay a substantial amount of bribe to get the work done.

The simple fact is that the India of 2011 has not only found its dubious place among the most corrupt nations of the world, but it has made the life of ordinary citizen that the politicians call 'aam aadmi' a living hell in the land of his dreams.

All that one heard from the prime minister was statements to root out corruption. As he issued such statements, more scams came tumbling out.

Will all this lead to a corruption-free India? 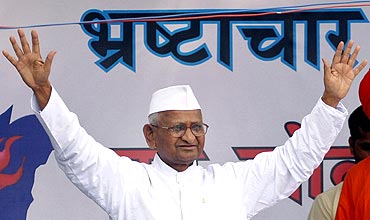 It is in this background that Anna Hazare emerged and received huge spontaneous support all over India. Here was a man who dared the mighty government in New Delhi to create a body that at least may start the task of reining in the demon of corruption.

As legal luminaries and senior ministers of the government tried to belittle the challenge, they found India's people rising to support this man.

New Delhi could no longer go against the tide, and thus, conceded the demand for a joint committee to draft the Jan Lokpal bill.

Looking back, the United Progressive Alliance government has created a new convention under which prime minister need not be a person elected directly by the people to the Lok Sabha.

It created the National Advisory Council, almost like a parallel body to the prime minister's office, for which there is no provision in the Constitution of India.

Is this the way in which our parliamentary democracy is going to evolve? Therefore, what has now been conceded in the shape of a joint committee of citizens and government ministers to draft the Jan Lokpal bill, is yet another step towards the evolution of the Indian democratic system.

It is a natural corollary of the neglect of their duties by the government in ensuring decent governance, development and law and order in the country.

The question now arises as to whether all this can lead to an end to corruption in India? As and when the office and organisation of Jan Lokpal does emerge, it may only be a massive first step to keep an eye on the corrupt politicians, bureaucracy and businessmen.

The common man would still need good governance to be able to live peacefully and without hassle.