Sign in  |  Create a Rediffmail account
Rediff.com  » News » Vindictive politics is not my cup of tea: Siddaramaiah

Vindictive politics is not my cup of tea: Siddaramaiah 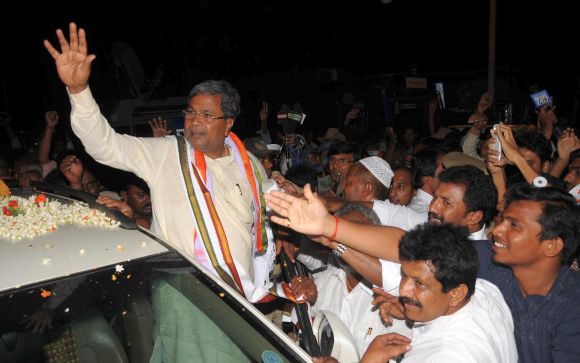 In an interview with rediff.com's Vicky Nanjappa, Karnataka Chief Minister Siddaramaiah says his first priority is to put the state back on track after five years of bad governance.

The wait has finally paid off and Siddaramaiah is now Karnataka's new chief minister. The 64-year-old leader who grazed cattle near Mysore as a boy has risen to the highest post in the state.

He himself had said when he announced himself as the top contender for the post of chief minister that he has a plus point and a person who was grazing cattle has risen to this rank.

Siddaramaiah, who has a law degree, is from the Kuruba (shepherd) community. After a short stint as a lawyer, Siddaramaiah has now spent 30 years in politics.

He first contested on a Lok Dal ticket in1983 from the Chamundeshwari constituency. He then joined the Janata Dal (Secular) and the highest post he reached was of deputy chief minister. He held that post twice -- once under J H Patel and the second time under Dharam Singh when the JD-S formed the government with the Congress.

In 2006, he joined the Congress after JD-S president H D Deve Gowda preferred his son Kumaraswamy over him for the post of CM in a coalition with the Bharatiya Janata Party.

The two-time deputy chief minister was born in 1948 at Siddaramanahundi in Varuna of Mysore district. Before the 2013 elections he was the leader of opposition in the Congress. After the mid term polls in 1985, he became the minister for animal husbandry under Ramakrishna Hegde. However, in the following elections, in 1989, he tasted defeat.

It was in the 1994 elections that he made his presence felt. He became the finance minister in the JD-S government headed by H D Deve Gowda. When Gowda had to hand over power in Karnataka after being made prime minister, the post of CM went to J H Patel, while Siddaramaiah was made deputy chief minister.

In 1999, Siddaramaiah lost the elections but came back in the 2004 elections. The JD-S formed the government with the Congress headed by Dharam Singh in which Siddaramaiah was the deputy chief minister. Two years later when the JD-S withdrew support from the Congress and allied with the BJP, Siddaramaiah quit as he realised this was a ploy to promote Kumaraswamy. He had said that it is a family party and hence wanted to quit. He joined the Congress in 2006.

Siddaramaiah means business and his no nonsense attitude is what many are banking on. His priority, he says, is providing good administration.

'I will not squander my chief ministership' 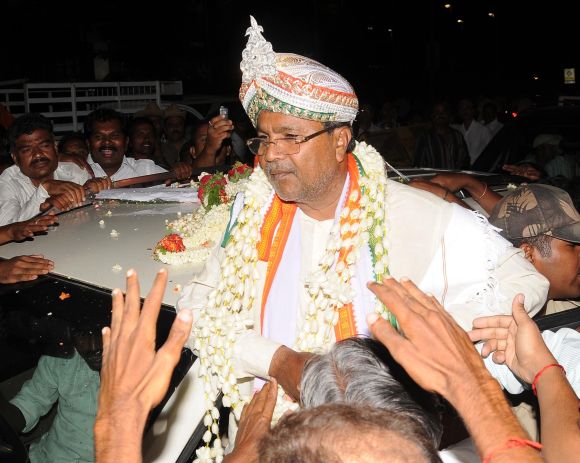 "I am extremely happy in being made chief minister. With happiness comes a huge responsibility. I will not squander it or make a mess out of it. I will deliver.

The governance that I intent to provide is simp#8804 it has to be pro people. The last five years has been bad for the people and the first thing for me to do is instil confidence in the minds of the people. The administration of the state has taken a hit in the past five years. It is a tough job but I need to first put things back on track.

My opponents have tried saying that I would find it tough to deal with the bureaucracy and the government employees as they were never fond of me. That is not true and it was just a smear campaign. I can lead the government and the days to come will prove what I am saying. My priority would be to better the finances of the state, the education and farming sector."

"I don't have much to say. I like a strong opposition and would like leaders like H D Kumaraswamy to play the role of a strong opposition. If the opposition is strong the government functions better. Whether in the JD-S or the Congress the rule is simple -- administration must be good."

'I do not support dynasty politics' 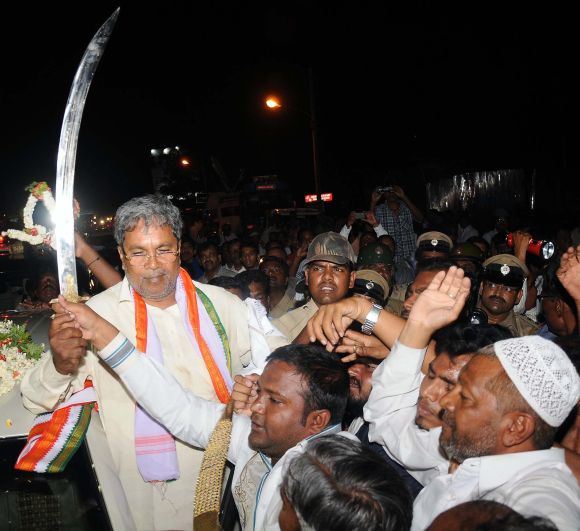 "It is a decision that was taken by the high command. That is all I can say. There is no ill will whatsoever between any of the leaders. The formation of the cabinet and the rest of the ministry will be done taking into confidence all the leaders in the party irrespective of being junior or senior."

"We will act upon the report put out by Justice Santhosh Hegde. In the opposition we had made a lot of demands for the implementation of this report but it was never done. We will need to recover money from those persons who fleeced the state through illegal mining. A special court will be set up for that. We will continue to fight against corruption. Many believe that I would be vindictive, but that will not be the case. Every one who has corruption charges against them will be dealt by the law. A due course of law will be followed."

"I will not yield to any lobby. I am confident about that. No one can bring in pressure into governance and as I have said earlier too that my top priority is to put the state back on track."

"I am not a believer in family politics or dynasty. I have kept my family out politics always and I will continue and not support dynasty politics."