Samajwadi Party is in a real celebratory mood after drubbing all the political parties on Tuesday. The headquarters, at a posh location in Lucnow is teeming with supporters, party workers, wannabe leaders, etc.

The air is filled with slogans, chanting and songs in praise of party leader Mulayam Singh Yadav and his son Akhilesh.

Standing here, it seems like an Indian wedding is taking place on a massive scale. With Holi round the corner, colour on people's faces is adding an extra touch to the event. The famous Indian entrepreneurship is also on full display. 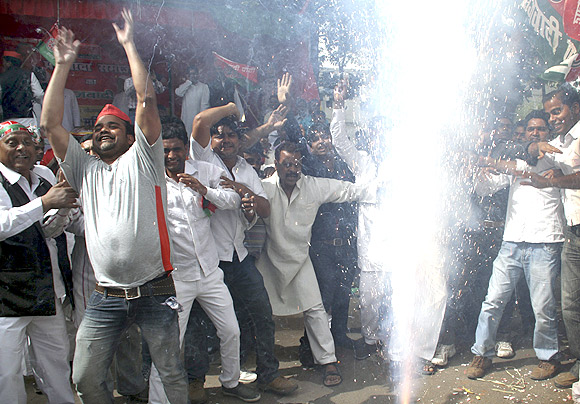 Hawkers are cashing it on with party flags, caps and banners; while others have set up temporary stalls, selling everything from food to garlands.

It seems very likely that the party looks set to sweep the all-crucial elections and will form the government on its own, and the Bahujan Samaj Party, the Bharatiya Janata Party and Congress will watch the show from the sidelines. 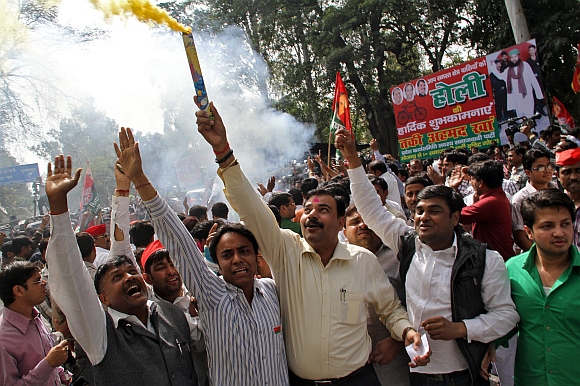 From the results, it seems Mulayam was not only able to tap into his Yadav-Muslim vote-bank, but also major inroads into the BSP and the BJP.

Mulayam's victory means Akhilesh will play a much bigger role in the state, while Congress general secretary Rahul Gandhi will have to start from scratch again.

Mayawati, meanwhile, will go back to try and woo back her lost support, that is if Mulayam's government doesn't drag her to court.