Sign in  |  Create a Rediffmail account
Rediff.com  » News » 'VHP, BJP can say anything, but they can't build Ram temple'

'VHP, BJP can say anything, but they can't build Ram temple' 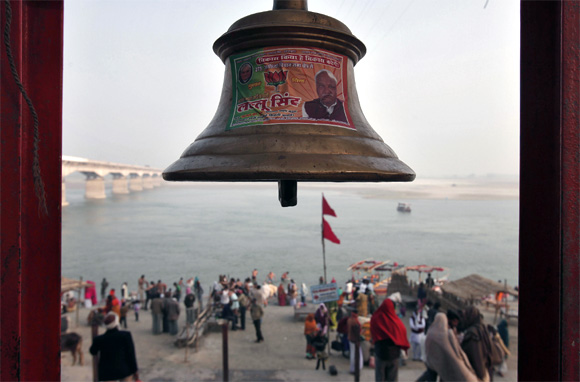 Image: A temple bell pasted with a pamphlet of BJP is seen on the banks of the river Saryu in Ayodhya
Photographs: Adnan Abidi/Reuters

At the Maha Kumbh Mela in Allahabad, the Vishwa Hindu Parishad recently resolved to construct a Ram Temple at the disputed site in Ayodhya. The sentiment was echoed by Rashtriya Swayamsevak Sangh chief Mohan Bhagwat and Bharatiya Janata Party president Rajnath Singh.

The Ram temple issue is currently under the aegis of the Supreme Court. As many as eight appeals, most of them filed by the All Indian Muslim Personal Law Board and the All India Babri Masjid Action Committee, are pending in the apex court.

Dr S Q R Ilyas, head of the BMAC and a senior member of the board, feels that the Sangh Parivar should not have raked up this issue.

In a candid chat with rediff.com's Vicky  Nanjappa, Dr Ilyas said the recent proclamation by the RSS, VHP and BJP was a desperate measure to rake up the issue of Hindutva once again.

'BJP finds itself in a desperate situation' 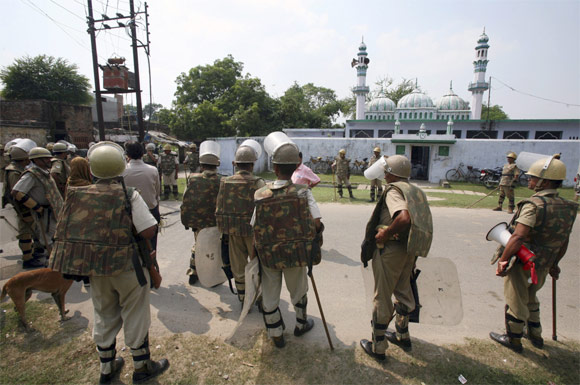 The Bharatiya Janata Party has lost its real appeal among the people. They are trying to go back to the issue as they do not have any solutions for the real problems on hand. They are speaking of the Ram temple issue today. What did they do about it when they were in power? They were unable to resolve the issue.

"The BJP has lost its hold on Uttar Pradesh. It appears that they are trying to strike a chord among the people of UP but I am afraid this strategy will not work. They ought to realise that by raking up issues such as these, they are not going to get any dividend in Uttar Pradesh. The BJP ought to be addressing issues of development. It should clean up the corruption in its own party first. These are issues that concern the nation.

"Despite the statements and resolutions, it is not possible for them (Sangh Parivar) to build a temple. The matter is before the court. The Supreme Court, while admitting the appeal against the order of the Lucknow high court, had clearly mentioned that status quo should be maintained (at the site). This means that nothing shall change and things will begin to proceed only after the courts take a decision. If they say that they will go ahead and build a temple now, they are doing nothing but fooling the people.

"Let them say what they please. If they are found to be in violation of the court order, then it is up to the government and the court to take action (against them). Why should we act on these statements? We have taken the legitimate path of going before the court and seeking a resolution to the dispute. We do not need to do anything. The Supreme Court has said that status quo should be maintained and the court is sensitive about its own orders. If anyone is found to be violating the order, then the courts will act.

"The BJP finds itself in a desperate situation today. There is infighting in the party and their alliance partners have not been able to come to any conclusion on who should lead the National Democratic Alliance. The party feels that it will gain some ground if it rakes up such sentimental issues."

'CBI is not serious about this case' 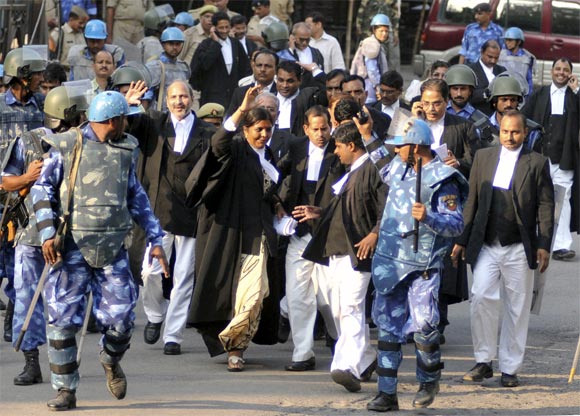 On one hand, the BJP speaks about Hindutva and on the other hand, their leader (Gujarat Chief Minister) Narendra Modi has been chanting the development mantra. He has been speaking a lot about the development in Gujarat. I think this is nothing but hype. Modi may assure his people about development. But at what cost is this development coming to us? Will it be at the cost of human rights violations or communal riots? What is the point of development when there is no peace?

"We had discussed various issues at the last meeting of the All India Muslim Personal Law Board. One of the issues was the attitude of the Central Bureau of Investigation which is dealing with the case against (senior BJP leader) L K Advani and others.

"The CBI should have gone ahead and filed an appeal, especially after the Liberhan Commission made it clear that there was a conspiracy to bring down the mosque. We decided that we should intervene in the case by petitioning the court. The manner in which the CBI has been putting up witnesses in court is indicative of the fact that it is not serious about the issue."