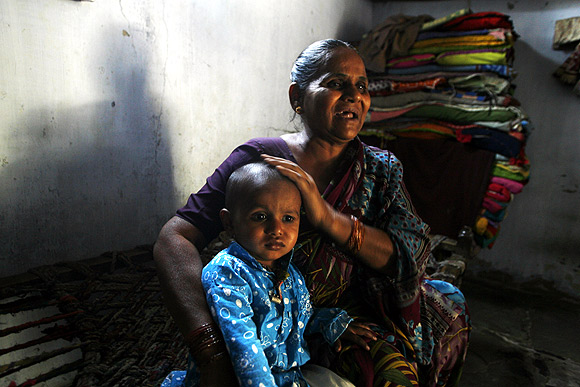 Image: Hajira Sheikh, a riot survivor holds her grandson at her residence in the rebuilt Naroda Patiya
Photographs: Arko Datta/Reuters

The judgement in the Naroda Patiya case, in which 97 people of a minority community were killed during post-Godhra riots in 2002, was pronounced on Wednesday by a special trial court.

The special trial court convicted 32 people while 29 accused were acquitted in the case. One of those convicted include Bharatiya Janata Party MLA and former minister Dr Maya Kodnani and Bajrang Dal leader Babu Bajarangi.

Additional principal judge Jyotsna Yagnik, presiding over the trial, had deferred the pronouncement on June 30 and fixed Wednesday's date for the verdict against 61 accused, including sitting BJP MLA Maya Kodnani.

Public prosecutors in the case were Akhil Desai and Gaurang Vyas.

The incident had taken place one day after the Godhra train burning incident on February 27, 2002. 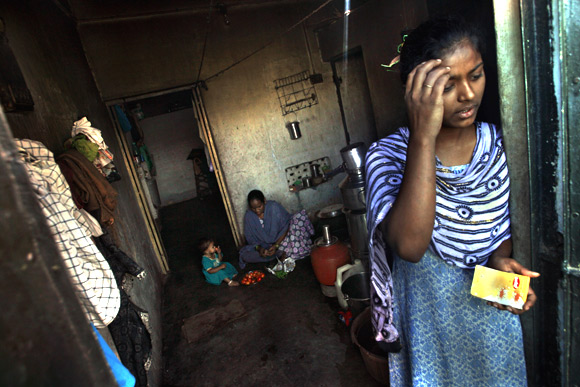 Image: Hameeda Sheikh, a riot survivor, with her sister-in-law Mehmooda Sheikh at their residence in the rebuilt Naroda Patiya
Photographs: Arko Datta/Reuters

On February 28, 2002, when a bandh call was given by the Vishwa Hindu Parishad (VHP), a large crowd gathered in the

Naroda Patiya area and attacked the people of minority community, killing 97 persons and injuring 33 others.

The trail began in the case in August 2009 and charges were framed against 62 accused. One of the accused, Vijay Shetty, died during the trial.

As many as 327 witnesses including eye witnesses, victims, doctors, police personnel, government officials, forensic experts and journalists like Ashish Khetan, who conducted a TV sting operation on the accused, have been examined by the court.

Initially, after the incident, 46 persons were arrested by the Gujarat police. After the probe was handed over to the Supreme Court appointed Special Investigation Team (SIT) in 2008, the agency arrested 24 more persons, taking total persons arrested in the case to 70.

However, before the charges could be framed or trial could begin six persons died, while two - Mohan Nepali and Tejas Pathak - jumped bail and are still absconding. 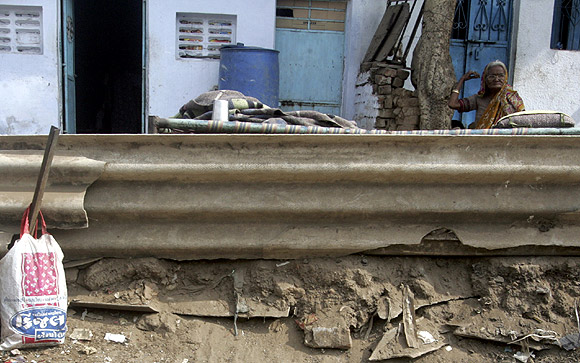 Image: A Indian muslim woman, victim of communal riots in 2002, sits outside her damaged house at Naroda Patiya riot site in the western Indian city of Ahmedabad
Photographs: Amit Dave/Reuters

All the accused have been charged under Indian Penal Code (IPC) sections 302 (murder), 307 (attempted murder), 323, 324, 325 (causing grievous hurt with deadly weapons), 367 (kidnapping in order to cause grievous hurt) and various others.

The Naroda Patiya case was one of nine cases of Gujarat riots being probed by the SIT, including the Godhra train burning case.

The other SIT cases in which judgements have been pronounced include the case in Ode village of Anand where 18 persons were sentenced to life imprisonment and five others to seven years in prison by a special court last month, for the killing of 23 persons on March 1, 2002.

Last year, a special court had awarded death sentence to 11 and life imprisonment to 20 others in the Godhra train burning case where 59 persons were burnt alive in S-6 coach of Sabarmati Express train near Godhra railway station.

Also, 31 persons were sentenced to life imprisonment by another designated court of Mehsana district in connection with Sardarpura riot case where 33 persons were killed during post-Godhra riots.

On July 30, 21 accused were sentenced to life imprisonment by a special court in another case of Dipda Darwaja area of Mehsana, where 11 persons were killed during 2002 riots.