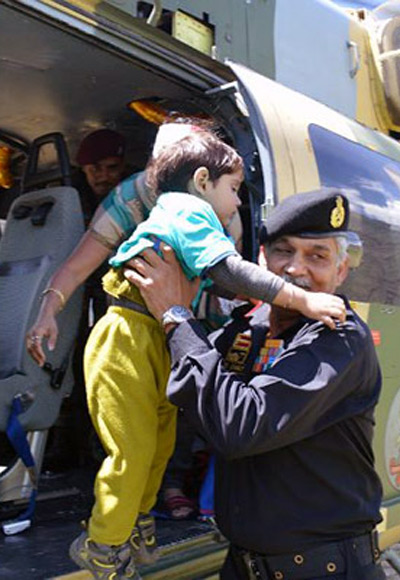 While the armed forces won hearts, the Uttarakhand government and civil administration drew flak for the poor disaster management. N Sundaresha Subramanian gives an eyewitness account of the rescue effort.

Savitri Sharma, 60, of Bharatpur in Rajasthan, who landed at the Gauchar Airbase after an ordeal of over ten days in Badrinath, was furious.

"Every state," she ranted, "is taking its people out. But there is nobody from Rajasthan. I don't know what (Chief Minister Ashok) Gehlot sahib is doing."

On hearing her, a Rajasthan officer stepped forward. First off he told Sharma that her breast-beating was unfair. Gehlot, after all, had sent him to make sure people from Rajasthan were taken out safely. But Sharma's wailing didn't go waste. She was put on a helicopter to Dehradun and was saved the arduous seven-hour road journey to the Uttarakhand capital.

If the Uttarakhand evacuation was about the heroics of the armed forces, it was also about the failure of the civil administration, greed and political one-upmanship. Senior political leaders influenced strategic decisions.

"Decisions such as which site was to be cleared first were influenced by the leaders, " said somebody who was in the thick of the rescue operations. 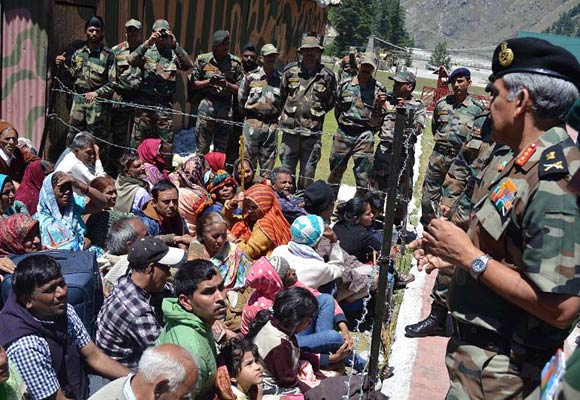 For example, when Gujarat Chief Minister Narendra Modi was here, one could see a greater movement of Gujarati people, eyewitnesses said. While officers of most states stayed put in Dehradun, some braved the weather to go into remote airbases and push their people into the first available chopper.

A Karnataka government officer was seen working at the Gauchar Airbase. He came to Dehradun expecting it to be a one-day visit. But after witnessing the situation first-hand, he extended his stay. Nearly 150 people from the state are still stuck in Badrinath area, he said on Thursday, while Kedarnath is almost clear.

The Air Force did a commendable job in the first three days of the operations under difficult conditions. Makeshift helipads in Kedarnath, Gaurikund and Guptkashi demanded precision landing and takeoff.

"A chopper had just three minutes to land, pick up the people and take off under zero-error conditions. The fleet worked dawn to dusk to clear a few thousand people in the first few days," an army aviator, who took part in the operations, said.

A video showing three helicopters, one just taken off, a second one landing and picking passengers, and a third waiting to land amidst difficult weather conditions was doing the rounds.

Sudheer Kulkarni of Pune, who was picked up in one of the helicopters, said he saw how one of the private helicopters crashed while missing the helipad by a fraction of a second.

"They were trying to make too much money. There was only one pilot, while most air force helicopters had two or three," he said. 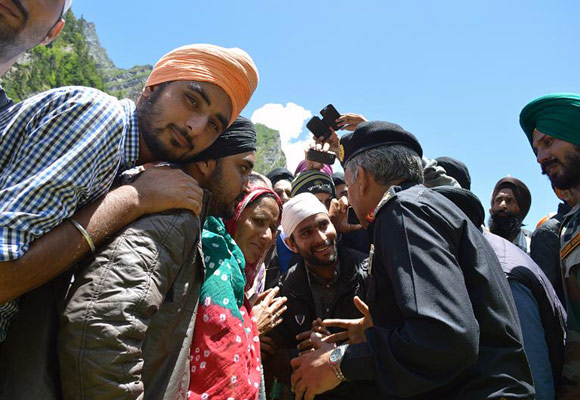 Private choppers did brisk business, some charging up to Rs 250,000 per hour. Among the people who used such choppers was Acharya Kaushik Maharaj who was stuck in Badrinath for over ten days. He arrived at Gauchar in a private chopper with a private secretary and a junior, who was carrying a small Krishna idol, in tow. After finishing the formalities, he left for Jabalpur in the same chopper.

A more daring private rescue came in the first few days of the tragedy, even before the Vijay Bahuguna government woke up. People waiting at Dehradun's Jolly Grant Airport saw a private jet frisking away a group of 25-35 pilgrims.

"This must have been a big industrialist who dropped trained mountaineers in the area and rescued people. If a private person could do it, why couldn't the government?" asked Yogesh Shinde, whose parents are missing in the deluge.

Efforts by the state government, more correctly its lack of efforts, have drawn serious flak from various quarters. There was little or no police presence in the mountains, said pilgrims. Kulkarni, who was rescued after six days in the wilderness, said, "There were one or two people here and there blowing whistles."

After the armed forces were deployed, the local police said they would step in only after the evacuation was complete. There arose a situation where there wasn't enough local intelligence for the army to carry out the rescue operations in unfamiliar terrain. 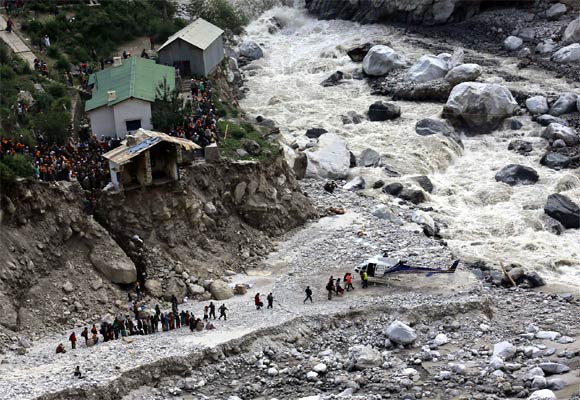 Even the arrangements at the Sikh holy shrine of Hemkund Sahib were not up to the mark, said pilgrims.

Anil Kumar, who had taken his family there, said he had to fend for himself. "We paid for our food all the way. And, we had to walk for nearlyt 40 km. In several places the path was so narrow that we had to embrace the rocks and move down as we were scared that we would fall," he said.

Kulwant Singh, an elderly Sikh from Ludhiana who served langar (free kitchen) to the stranded tourists, said, "We have fed the peop#8804 the leaders will come later. "

Even when samaritans offered a helping hand, the local administration was not too helpful. Brigadier (retired) Dalip Kapur of Project Sewa of Fortis Hospital, who has set up camp at Gauchar, said, "The right hand doesn't know what the left is doing. Though all help was available, the state government did not know how to utilise it."

Kapur recalled his experience when trying to get his team to the affected areas. "We were made to wait at what was supposed to be a control room for over an hour without any response. Only when we escalated the matter to the principal secretary (health), did things start moving a bit."

It was with considerable difficulty that they got sanction to move to Gaurikund and Badrinath. "Do you have your vehicles?" one Uttarakhand officer asked Kapur. The officer clearly did not realise the urgency of the situation.

Eventually Kapur and his colleagues managed to reach Gauchar and other centres such as Joshimath by liaising directly with the armed forces. But, by then a lot of precious time had been wasted. 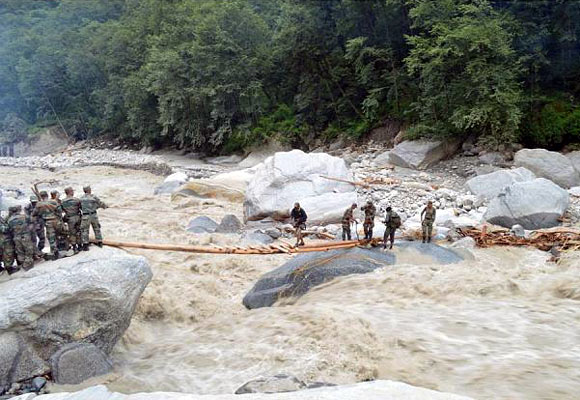 Even after the monumental rescue efforts by the armed forces braving difficult conditions and a lackadaisical state government, thousands are still waiting to be rescued and the story of the locals is still largely under wraps.

There was an instance in Agasthamuni, which is cut off on both sides by slides and gorges, when a Nepalese farmer who had brought some vegetables to sell in the market created a mini riot as there were too many buyers for the meagre produce.

Frequent landslides on the main highways have delayed supplies such as vegetables and fruits. In several instances, truck drivers have had to throw away rotting vegetables.

Babli Gupta, whose milk van plies from Rishikesh to Badrinath once in five days, said he is ruined because his van is stuck at Govindghat and he was unable to get it out.

"I took a second vehicle on rent which too has broken down," says he. "Will I get something from the government?"

There were tales of destruction on everyone's lips. At Dungripant, a temple was dangerously close to the river. Another high wave and it could be gone. Prem Prakash, a young monk who lives in a hut near the temple, said he saw heavy destruction at Govindghat. 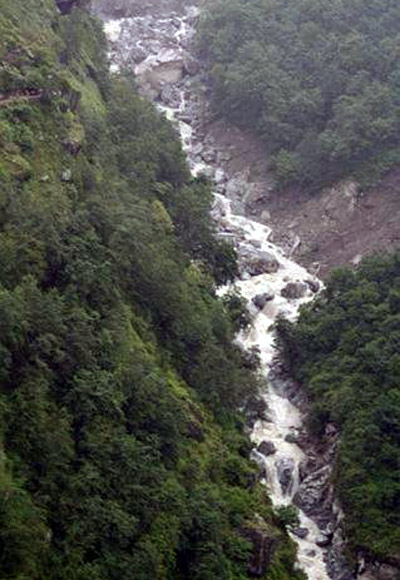 Some children had been left in their cars by parents, and drivers were waiting in vehicles -- they are all gone.

At Srinagar, which is the last major city on the road to Kedarnath and Badrinath, an entire bus depot has been destroyed and a colony is under sand. Relief efforts are on, but at a snail's pace.

The other sore point is that all efforts are directed at the tourists and locals are getting neglected. Anuj Negi, who works with a government department in Gauchar, said, "Nobody is talking about the plight of the local population. Such landslides and floods happen here every year. The district magistrate comes, inspects the place and goes away. Even in a developed place like Gauchar, nothing gets done. Imagine the plight of small villages and towns that are higher up and are accessible only on foot."

Locals in villages close to Gauchar are now coming up with photos and details of people missing from their villages and who were working in Kedarnath and other places en route. With no institutional mechanism, they approached the only cyber cafe and its owner, AK Bhandari, who helped them put up the photos on websites. 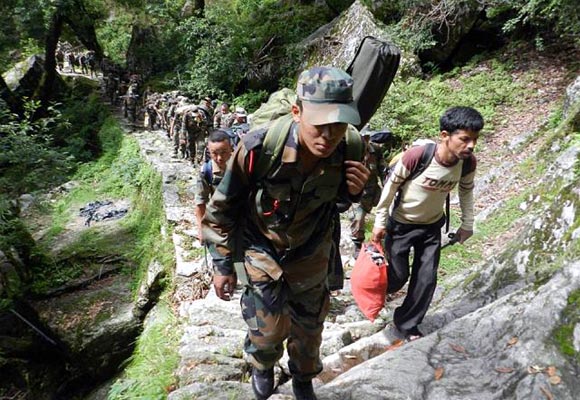 Bhandari tried to help them when he got time between answering calls from distant places about people rescued from the airbase, as he also operated the helpline.

"I am getting so many calls about people whom I can't find on any list," he said.

One silver lining in this bleak scenario was that the medical situation remains under control. Alexis Moens of Medecins Sans Frontieres, who was returning because the medical needs had been largely taken care of, said. "We need to monitor the situation for the next two months for any outbreaks."

With the armed forces back in the barracks, can this job be left to the local administration?