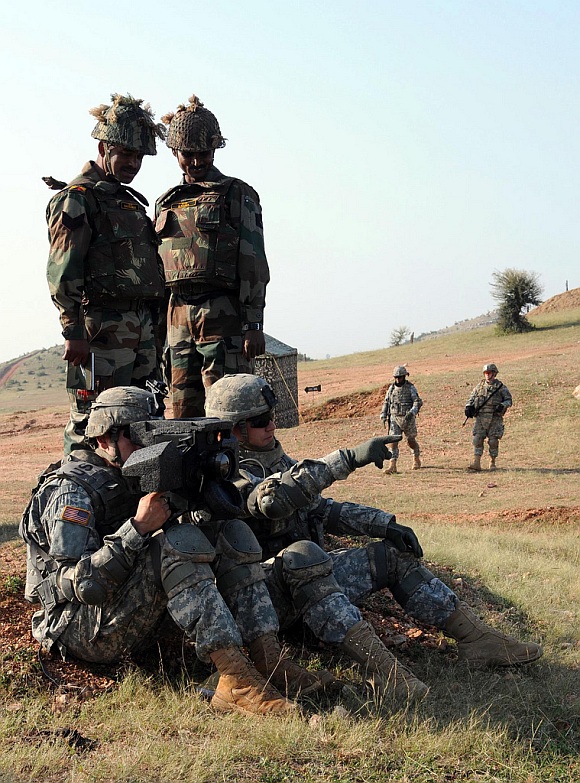 Image: Indian soldies with their US counterparts
Photographs: Courtesy: US Army

United States Special forces teams are currently stationed in five South Asian countries including India as part of the counter-terrorism co-operation with these nations, a top Pentagon commander has disclosed.

These teams have been deployed by US Pacific Command as part of its effort to enhance their counter-terrorism capabilities, in particular in the maritime domain, Admiral Robert Willard, the PACOM Commander said on Thursday.

"We have currently special forces assist teams -- Pacific assist teams is the term - laid down in Nepal, Bangladesh, Sri Lanka, Maldives, as well as India," Willard told  lawmakers at a Congressional hearing in response to a question on co-operation with India on counter-terrorism issues.

"We are working very closely with India with regard to their counter-terrorism capabilities and in particular on the maritime domain but also government to government, not necessarily Department of Defence but other agencies assisting them in terms of their internal counter-terror and counterinsurgency challenges," Willard said. 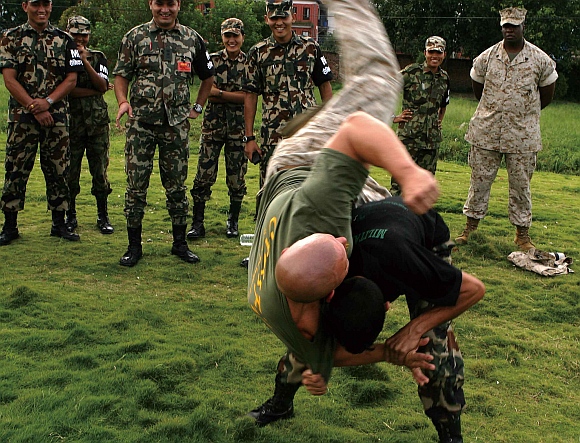 Image: A Nepal army soldier executes a shoulder throw on US Marine, during a martial arts demonstration in Kathmandu, Nepal
Photographs: Courtesy: US Army

Willard said, Pakistan-based Lashkar-e-Tayiba is a very dangerous organisation. It not only has very good operational security, but also a lot of international design in terms of their aspirations.

"So it is a very important threat, and we're working very closely with the nations in the region to help contain it," he said.

The PACOM Commander was responding to a question from Congressman Joe Wilson as to what effort is being made to counter threat from LeT.

In his prepared statement, Willard told lawmakers that the US and India are working together on contain LeT. "Responsible for many attacks in India, including the horrific attacks into Mumbai, LeT is headquartered in Pakistan, affiliated with al-Qaeda and other VEOs, and contributes to terrorist operations in Afghanistan and aspires to operate against Asia, Europe and North America," Willard said. 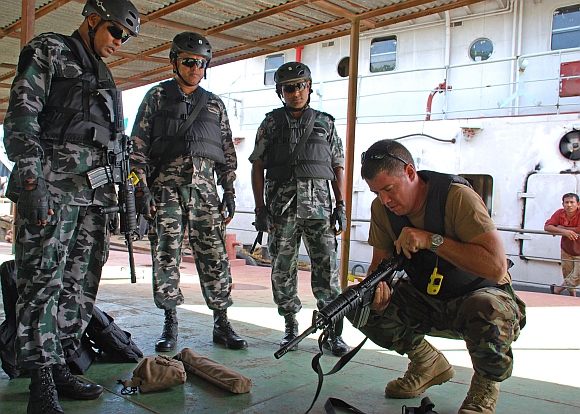 He said Pacific Command's Indian Engagement Initiative that resourced and hosted Mumbai counter terrorist specialists for training exercises and exchanges throughout the US, together with capacity-building activities with South Asian partners are mainly focused on containing LeT and contributing to CT self-sufficiency of the sub-region's  militaries.

Willard said, South Asia as a whole is of major strategic importance to the US. Anchored by India and containing major sea line of communication for the transport of energy and other commerce to Asia and the America from the Middle East and Europe, South Asia security partnerships are increasingly vital to United States Pacific Command 's mission. 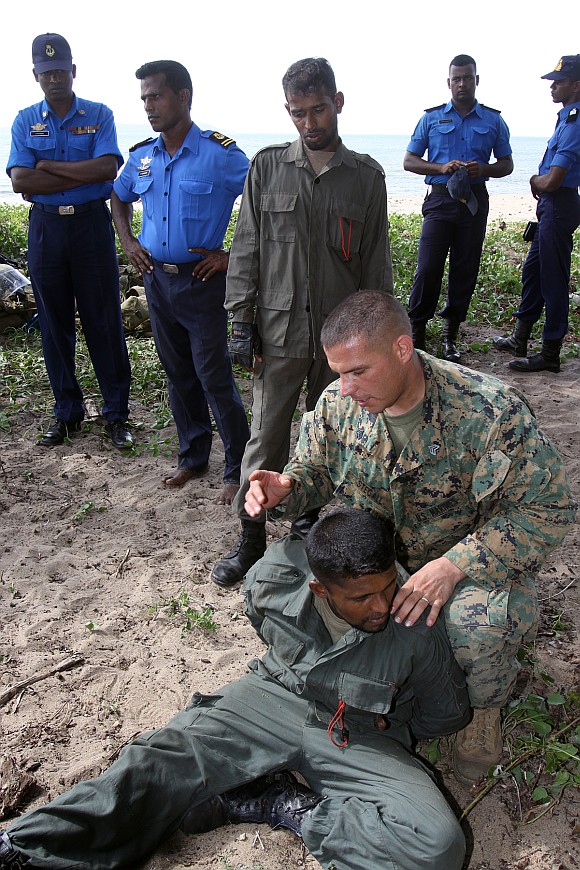 "South Asia is home to a confluence of challenges, including nuclear armed rivals India and Pakistan, numerous transnational VEOs such as Lashkar-e-Taiba, piracy, trafficking in narcotics and persons, disputed borders, and insurgent movements that have plagued India, Nepal, and Sri Lanka," he said.

USPACOM engages throughout South Asia, assisting its militaries to counter and contain VEOs such as LeT, cooperating in maritime security activities such as countering piracy, conducting disaster response planning and training, and exercising extensively, service to service, he said.

Bangladesh, he said, has emerged as a particularly effective partner in the fight against terror, cooperating with India as well as the US to counter VEO activity by actors such as LeT. Image: A US instructor with members of the Maldives National Defense Force Coast Guard
Photographs: Courtesy: US Army

Further, Bangladesh's military is advancing its capabilities and contributes broadly to UN peacekeeping operations, he added.

"Also, the Bangladesh army is primarily responsible for and has achieved major advancements in the protection of its citizens during the annual cyclone season and the inevitable flooding and related disasters with which Bangladesh repeatedly contends," he said.

...
Tags: PHOTO , MORE , TOP
More
© Copyright 2022 PTI. All rights reserved. Republication or redistribution of PTI content, including by framing or similar means, is expressly prohibited without the prior written consent.
Print this
article