Sign in  |  Create a Rediffmail account
Rediff.com  » News » UP: Governor , not Maya or Mulayam likely to call the shots

UP: Governor , not Maya or Mulayam likely to call the shots 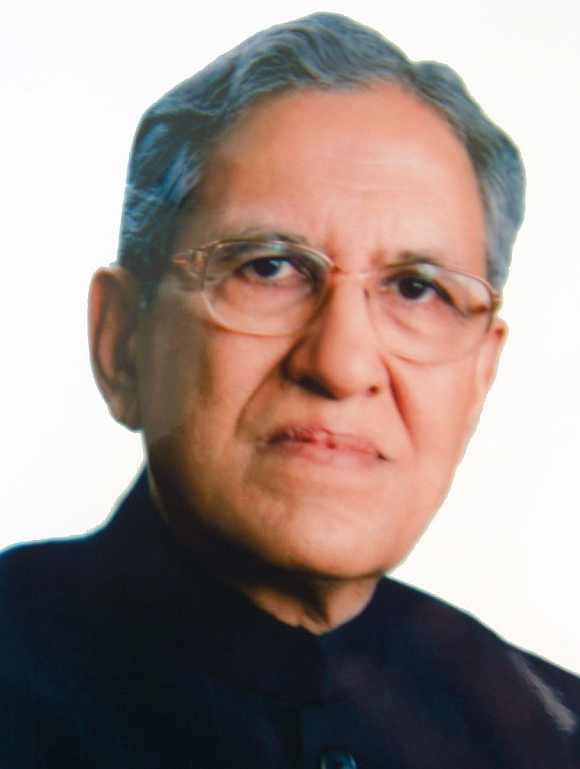 Exit polls predict that the BSP and SP will not get enough votes to form a government in Uttar Pradesh, hinting at the possibility that either party may turn to the Congress or BJP for support.

While political parties in Uttar Pradesh wait for the all-crucial assembly election results on Tuesday, the likelihood of President's rule in the state is gaining ground.

According to the exit polls, the two big regional players -- the Bahujan Samaj Party and the Samajwadi Party -- are not projected to get enough votes to form a government on their own and are likely to look for support from other parties, like the Bharatiya Janata Party or the Congress.

But -- if public statements are to be believed -- both the Congress and BJP are in no mood to extend support to either the Samajwadi Party or the BSP.

If the exit polls turn out to be correct and both BSP leader Mayawati and Samajwadi Party leader Mulayam Singh Yadav fail to get outside support, which is a real probability, then that means the state is headed for President's rule.

'Imposing President's rule is not easy' 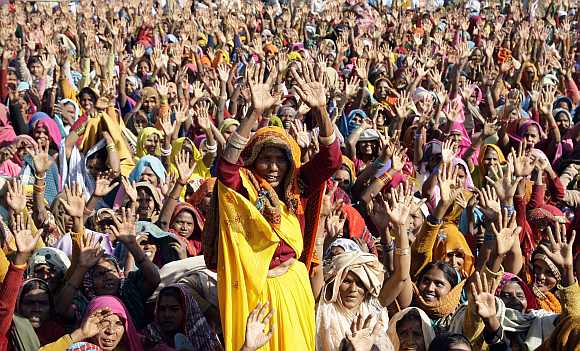 Imposing President's rule is not easy, Professor Awasthi feels. "President's rule has to be ratified by both Houses of Parliament within two months and that itself would be very difficult as the political parties are unlikely to agree to it."

Professor Awasthi says given the present circumstances, it is possible that the Congress might not support Mulayam Singh and the BJP may not back Mayawati.

"What is to be seen is by how much the SP and BSP fall short (of a majority in the 403-member UP assembly). If the gap is just 10 or 15 seats, then that could be filled with smaller parties. If it is 40 or 50 seats, then there's a problem."

"Exit polls claim the BJP will post good numbers. If that turns out to be true, then it might try to form a government of its own with the support of other parties," the professor adds. "It's too early to say and the situation is very fluid." 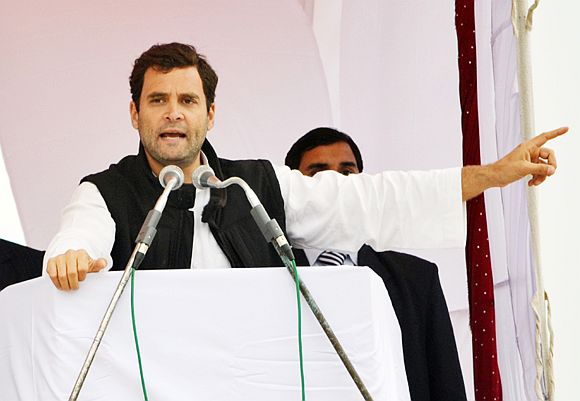 Image: Rahul Gandhi at an election rally in UP

SK Dwivedi, a professor of political science at Lucknow University, expects the Samajwadi Party and the Congress to come together, as they have more in common with each other than the BSP and the Congress.

"It was the Congress that first raised the minority reservation issue and then the SP latched on to it. Plus, Rahul Gandhi has criticised the BSP whereever he has gone, so Mayawati is not going to make that compromise," he says.

"The BJP will not join hands with the BSP because it has tried to work with Mayawati in the past and has paid a heavy political price for it," adds Professor Dwivedi. "The BJP will prefer to sit outside than support the BSP."

Akhilesh Yadav is the new face of UP 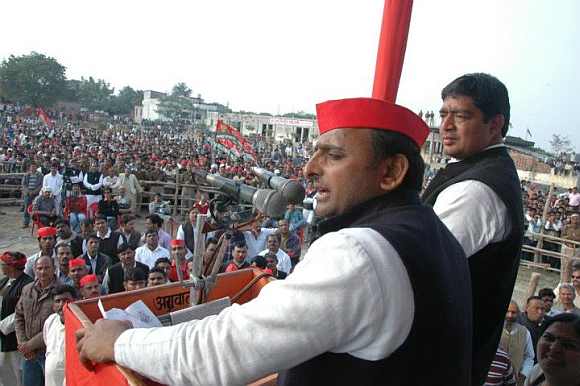 "There was no party-based voting. It was more of candidate-based voting," Professor Dwivedi feels. "The youth is disappointed with the parties. They look at the image of the candidates. Development and corruption, not caste and religion, are the most important issues for the youth."

"If the voter is thinking on these lines, then that is good. Parties on their own will not change, but the voters can force them to field better candidates.

"Today, after more than 60 years of Independence, we are still fighting in the name of caste and creed and this will only stop when the voter starts thinking on these lines. That awareness has reflected in this election."

According to the professor, Akhilesh Yadav, Mulayam Singh Yadav's son and the Samajwadi Party's working president, is the party's new face, but don't expect the SP to become progressive or change radically.

"There will be no qualitative change," he adds, "whether it is Mulayam or Akhilesh." 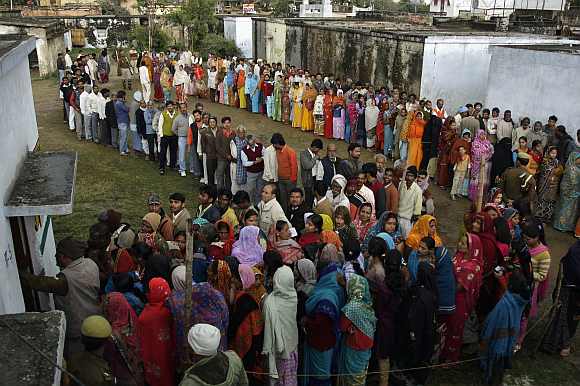 National parties like the BJP and the Congress are not expected to do well in UP because they have concentrated their energies on middle-class issues in major cities and have lost touch with the ground realities at the local and state levels, he adds.

"Leaders like Rahul Gandhi and Uma Bharti flew into UP thinking they could turn the numbers to their favour, but both parties don't have anything on the ground," he says.

"Even the urban-rural divide is very visible in these elections. We constantly heard that people were fed up of politicians and were made to believe that there was an anti-neta wave in the nation, but the historic turnout of voters in the state disproves that completely."

"That anti-politician feeling is limited to a very small section of urban voters," Professor Giri adds.

He feels the urban middle class in cities like New Delhi, Mumbai and Bengaluru grabs too much attention in the national parties and that has had a toll on their thinking.

The UP election, Professor Giri feels, are a reality check for Kisan Baburao 'Anna' Hazare and the so-called anti-neta wave.