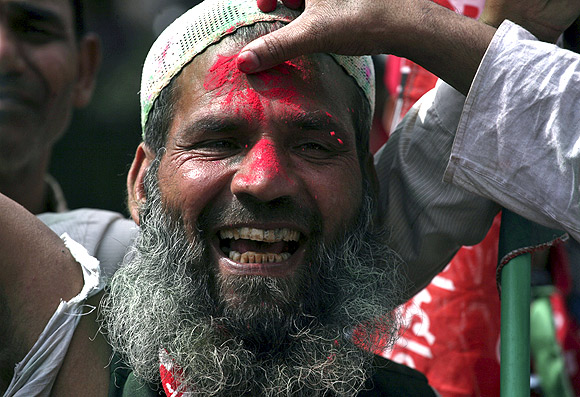 Samajwadi Party may gently want to ease Akhilesh Yadav into the role of the CM, rather than rock the boat so soon after such an impressive victory, says Neerja Chowdhury

In a historic election which had been billed as the semi-final for the 2014 national polls, the Samajwadi Party has surged to a thumping victory on its own and the Akali Dal-Bharatiya Janata Party combine has bucked anti-incumbency in an unprecedented outcome, signifying an increasing anti-Congress mood in north India.

Election 2012 comes as bad news for the Congress party, which failed to get a majority in either Punjab or Uttarkhand, states where no incumbent government had won since their inception. To make matters worse, the Rahul magic failed to click in Uttar Pradesh. Only the small state of Manipur came as a consolation prize for the Congress.

This will spell trouble for an already beleaguered and scam-tainted United Progressive Alliance, with the central government likely to be buffeted around that much more, both by the Opposition as well as its regional allies in the weeks to come. This could make the forthcoming budget session that much more difficult to negotiate and improve the chances for the installation of a non-Congress President in July. 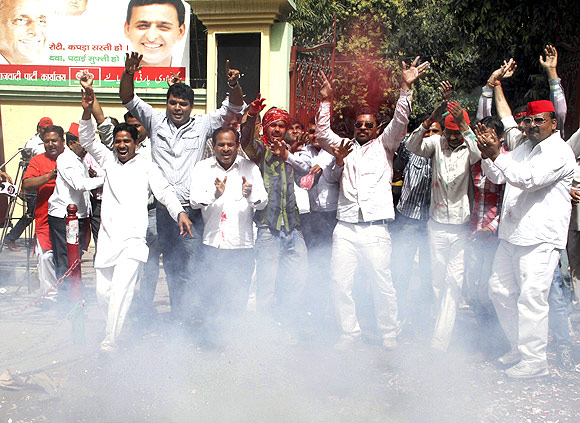 That the Samajwadi Party marched ahead in Uttar Pradesh to a clear majority, breaking all previous records and expectations -- its highest ever tally has not crossed 143 seats -- showed that it had got the support of communities other than its traditional "MY" (Muslims and Yadavs) vote-bank.

Clearly, there was an undercurrent against the Mayawati government and the Samajwadi Party was seen as best placed to provide the alternative to the Bahujan Samaj Party rule.

It was also clear that the people of UP wanted a majority government, like it did in 2007, and not a khichdi assembly. This trend has been visible in recent times in other states like Bihar. The SP and the BSP ended up exchanging positions while the Congress and the Bharatiya Janata Party remained more or less static, though the Congress improved its vote-share and there was a decline in the vote percentage of the BJP.

The real game-changer in this election was Akhilesh Yadav, the 40-year-old son of Mulayam Singh Yadav and UP unit president of the Samajwadi Party, and not Rahul Gandhi, who, like Akhilesh, also led his party's campaign from the front, and worked equally hard and with sincerity. But he did not click like Akhilesh did. 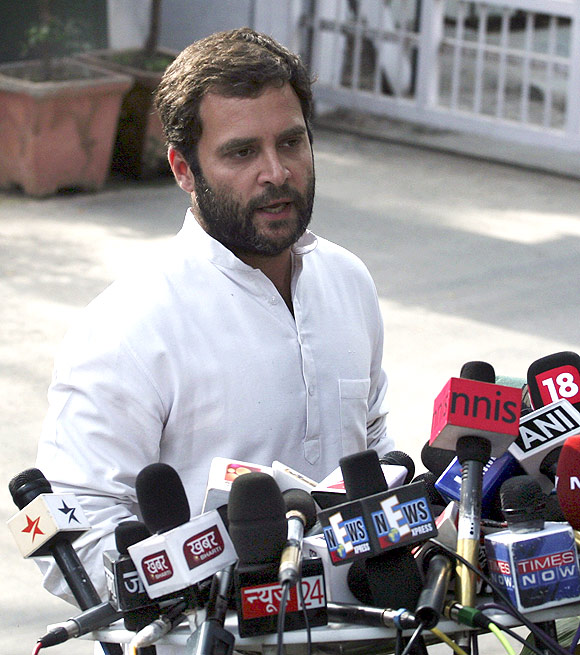 Rahul did not represent the local face that people wanted. Things might have been different had Rahul Gandhi been projected as the chief ministerial candidate of his party.

For all his rhetoric against Mayawati, which set the tone for the environment against a corrupt BSP, it  was the SP -- which focussed more on the freebies it would provide than on Mayawati -- that reaped the harvest.

Again, though it was the Congress which announced 4.5 per cent reservation for backward Muslims, promising another 4.5 per cent later, the Muslim community clearly plumped for the Samajwadi Party, or its impressive tally would not have been possible.

The BJP also benefitted in many urban seats from a Hindu-Muslim polarisation, with the Congress leaders repeatedly harping on a quota for Muslims and making statements like "Sonia Gandhi had tears when she saw photographs of the Batla House encounter".

The Congress needlessly created a reaction among the upper castes by raking up an old issue. As a BJP wag put it, the Congress did for the BJP what Narendra Modi might have done had he campaigned in UP. 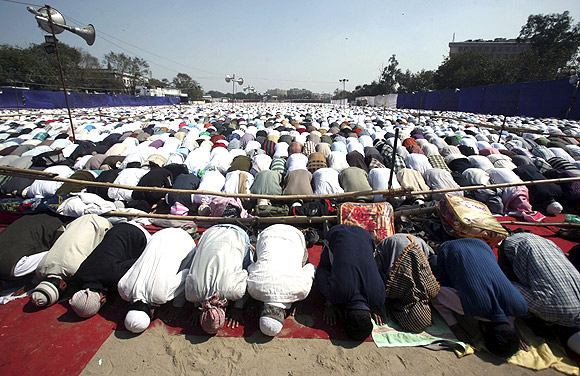 The Congress started off with hardly anything in its kitty, unlike the SP which had 25 per cent of the vote even in its worst days in 2007, and people saw it as the force which could realistically remove Mayawati from the throne.

The Congress improved its vote share by over 4 per cent, from 12 per cent to 16 per cent -- though during the Lok Sabha polls it was around 18 per cent -- but it did not reach what might have been the tipping point in terms of notching up seats.

The party made a mistake in not forging the social coalition that had stood Indira Gandhi in good stead -- of Brahmins, Muslims and Dalits. In addition, it could also have wooed some of the Other Backward Classes and Most Backward Classes this time.This was the same rainbow coalition which had brought Mayawati to power in 2007.

The Brahmins would have provided the base vote in the Congress kitty, attracting Muslims to their side in what could have been perceived as a winning combination. They had looked at the Congress favourably in the 2009 general elections and might have gravitated to the party had it given them more tickets and sent them suitable signals. 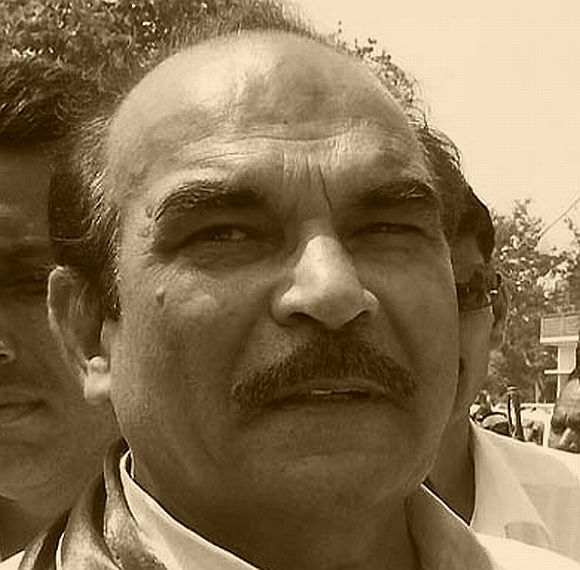 Instead, the Congress strategy chose to focus more on wooing the OBCs, Jats and the MBCs, who have not been traditional voters of the party. It will take longer to bring these communities to Congress's side.

Rahul Gandhi could also have done without the loose canons in his party, with their statements about Batla House, President's rule (and this may have created an even greater surge for the SP in the last two phases, held in areas with large concentration of Muslims) or 9 per cent reservation for the Muslims, which created a reaction.

The turning point in the election for the SP came when Akhilesh Yadav took a stand to keep out D P Yadav, despite the backing the "don" had of senior SP leaders like Azam Khan and  Mohan Singh, thereby signalling a break from the past for the party which had been booted out in 2007 for its regime known for its goondagardi.

This proved to be reassuring also for the upper castes, which had not been prepared otherwise to look at the SP. Had the announcement been made by his father, Mulayam Singh Yadav, who is the national president of the SP, it may not have had that kind of an impact. It carried credibility because it was Akhilesh who made it.

Akhilesh Yadav reached out to people 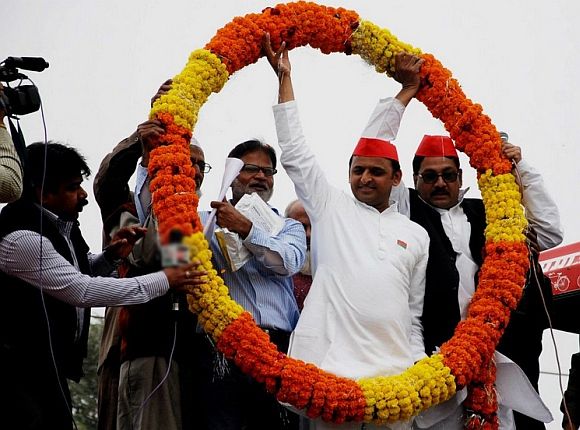 Slim and diminutive like his father, armed with a boy-next-door charm and an unassuming manner, Akhilesh had drawn large crowds during the campaign, made up largely of enthusiastic young people. They had rushed to hear bhaiyya, ever since he started his cycle and rath yatra as far back as September last year.

Akhilesh Yadav is hardly an orator raising his audiences to a frenzy -- his speeches sounded as if he was talking to a group of people -- but it was his easy accessibility, 'mature" politics, and the way he reached out to people and mingled with them that endeared him to the youth, and they tipped the scales in favour of the SP.

Though the SP has attained a clear majority, thanks to the efforts of Akhilesh, the party is rooting for Mulayam Singh Yadav as chief minister. It may gently want to ease Akhilesh into this role, rather than rock the boat so soon after such an impressive victory, given that senior party leaders like his uncle Shivpal Yadav and Azam Khan are opposed to him.

The way Akhilesh was received during the campaign, leading his party to such a tumultuous victory, has already catapulted him into the position of a natural successor to Mulayam Singh Yadav.

So, in that sense, the succession in the party has already been effected, and it is only a matter of time before Akhilesh Yadav, who had anyway had a major say in ticket distribution, takes over. The party will have to bring him to the fore sooner rather than later, for he, rather than Mulayam Singh Yadav, will be better placed to take on Rahul Gandhi in 2014.