'There is no reason for not accepting our resignations' 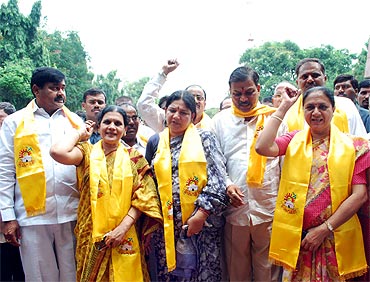 Monday was an eventful day in Andhra Pradesh politics with a majority of the elected representatives of Telangana region quitting their seats to press their demand for a separate state.

Earlier, the main opposition, Telugu Desam's Telangana Forum had declared that its members of legislative assembly would resign only after 'all the Telangana Congress MLAs do so'. However, Telugu Desam Party MLAs changed their position and even before Congress MLAs could reach assembly, TDP MLAs led by E Dayakar Rao met Deputy Speaker Bhatti Vikramarka and tendered their resignations.

"We have submitted our resignations in a correct format and there is no reason for not accepting it. We are very serious", declared Dayakar Rao. 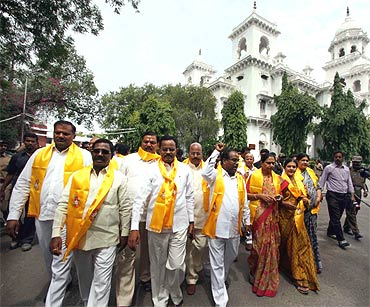 He said that the resignations were aimed at creating a constitutional crisis and it can be achieved only when all the Telagnana MLAs of all the parties resign. When asked whether the Telangana Rashtra Samithi MLAs should also resign, he said, "all the parties."

Interestingly, TRS MLAs had resigned in support of Telagnana last year and later they were re-elected. While 32 TDP MLAs resigned today, four, including suspended leader Nagam Janardhan Reddy, had sent their resignations on Sunday itself.

The first MLA to submit the resignation at 11 am was Kona Surekha from Warangal district. Surekha, who after revolting against Congress, is now with the Yuvajana Sramika Rythu Congress of Jaganmohan Reddy, said that no Congress leaders should go to Delhi till the central government announces formation of Telangana. She also demanded that K Chandrasekhar Rao and Vijayshanti of TRS resign their seats.

As the arrival of Congress MLAs and ministers to the assembly was delayed, speculation was rife that they have succumbed to the pressure of the high command.

Even when they arrived and trooped into the office of the deputy speakers, there were rumours that their resignation letters were not in a correct format. Some of them even pointed out that the one line resignation letter was typed when, as per rules, it should have been handwritten.

'All Cong MPs should resign first, it is their responsibility' 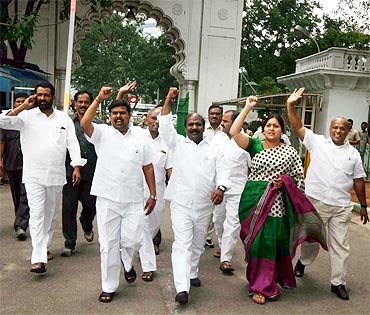 Later, Congress leaders clarified that all MLAs had written their resignation letter before submitting it to the deputy speaker. As Speaker N Manohar is away in the Unites States, any decision on the resignation letters would have to wait till he returns on July 7.

The resignations are unlikely to be accepted immediately, as the speaker will call each MLA individually to seek confirmation and inquire about the reason for doing so. While there was heavy security in and around the state assembly building, there was an air of festivity at the nearby Telangana Martyrs' memorial where hundreds of people had gathered to celebrate the new turn of developments.

The Telugu Desam MLAs first went to the memorial and paid their respects before going to the assembly. Slogans of jai Telangana were raised amid drum beating, while small groups of Telangana supporters took out processions for some distances to hail the decision of the MLAs to resign. There were celebrations in all the nine districts of Telangana region.

The news of the failure of the Congress Lok Sabha members in keeping the appointment with Speaker Meira Kumar also created confusion in Hyderabad. Two Telugu Desam Lok Sabha members from Telangana, Ramesh Rathod and Nama Nageshwar Rao, announced that they would tender their resignations to the speaker only after all Congress members of parliament of Telangana resign. "It is their responsibility to do it first as they are the ruling party", Nageshwar Rao said.