The site resembled a war zone 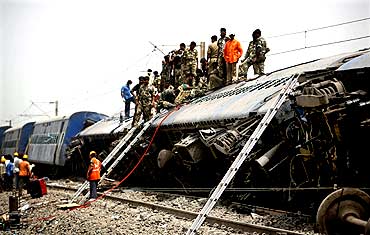 Mangled heaps of bogies lying off the tracks, passengers in bandages and plasters and a row of hearse vans lined up -- the scene at the site of the derailment of the Mumbai-bound Gyaneshwari Express near Jhargram virtually resembled a war zone.

Belongings of passengers including suitcases, bags and shoes were strewn around. Ladders and cranes were deployed to rescue the survivors and clear the tracks at

Guptamoni, nearly 135 km from Howrah, where the derailment killed 68 passengers in the wee hours of Friday morning. 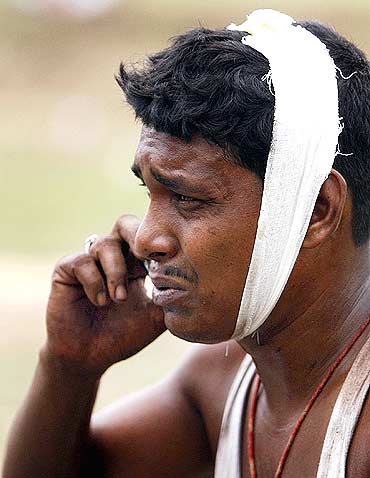 Many passengers were seen in bandages or plasters, sitting huddled with whatever was left of their belongings, waiting to be evacuated. Some others were seen weeping inconsolably as bodies were brought out of the crushed bogies.

Rescue workers were trying to enter the overturned bogies using gas-cutters. Those who managed to come out on their own squatted along the tracks, nursing their wounds.

Central Reserve Police Force personnel and army personnel, assisted by a sniffer dog and donned in masks and helmets, used gas cutters to carry out the rescue operations. 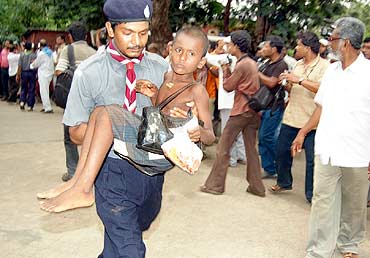 The correspondent saw a six year-old girl being extricated from the S4 compartment in an unconscious state. She was rushed to a waiting helicopter to be ferried to the railway hospital at Kharagpur and the Sadar Hospital at Midnapore for treatment.

Heart-breaking scenes were witnessed at the site.

Debashsis Naskar, a goldsmith from North 24 Parganas working in the western metropolis, wept uncontrollably as he had lost his father, elder brother, sister-in-law, younger brother and niece in the incident.

Mamoni Begum, a young woman from North 24 Parganas, frantically searched for her six year-old daughter, with whom she was traveling to Mumbai to meet her husband.

Passengers recounted the harrowing experience, saying they were thrown off their seats as the goods train coming from the other direction rammed into the coaches, which had overturned on the down-line. The tragedy happened at nearly 1:30 a.m.

'All of us have escaped death' 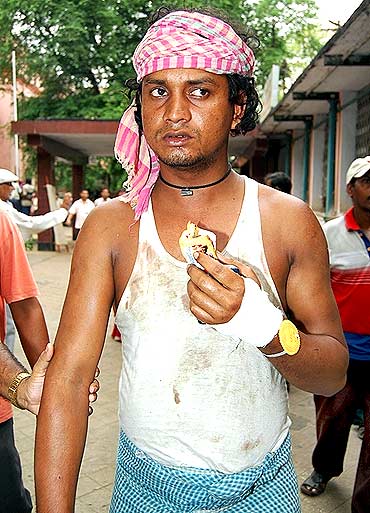 Five coaches, S-4 to S-8, were the worst hit, with coach-9 having telescoped into the one ahead of it. Four wagons of the goods train were also derailed.

"It was pitch-dark and I don't remember what happened thereafter. When I regained my sense, I somehow managed to scramble out of the coach through the emergency window," said Ajay Gupta, who was on board the train.

Jagabandhu Sardar, in his late forties, said he was in S-6, one of the worst affected bogies, with his wife and three daughters. "All of us have escaped death though some of us have suffered injuries," he said.

Food was being distributed among the passengers, who waited in the open in the hot summer sun. A water tanker too was kept at the site to provide drinking water.

Assistant drivers of both trains killed 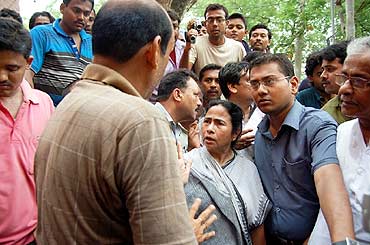 National Disaster Rescue Force personnel from Kolkata were rushed in to help in the operations, while the disaster rescue team of the Kolkata police was expected to reach the spot soon.

A 140-member National Disaster Management team is on its way from Delhi to join the rescue operations, Banerjee said.

The engine of the train was not damaged but the pantry car behind it got derailed, followed by 12 others behind it.

The assistant drivers of both the trains were killed in the incident, railway sources said.

Salvaging work was already complete in S3 and was going on in S4, railway sources said 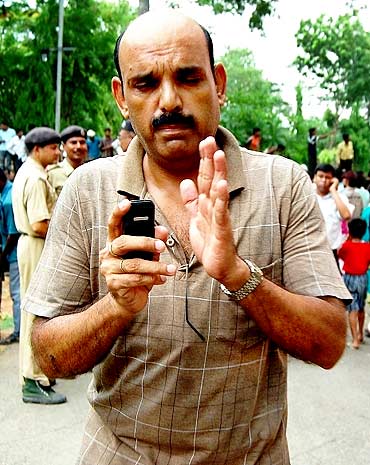 Overhead electric wires were snapped to avoid any accident as the Central Reserve Police Force, along with the army, paramilitary forces, state police, Government Railway Police and the Rashtriya Police Force grimly went on with the rescue operations, which were supervised personally by Railway Minister Mamata Banerjee.

Medical teams of various organisations lent a helping hand and some of the injured passengers were administered first-aid at the spot, while the seriously injured victims were being ferried to hospitals in a helicopter by the IAF.

Another helicopter belonging to the BSF was on stand-by along with several ambulances, while a crane stood by to haul the capsized bogies.