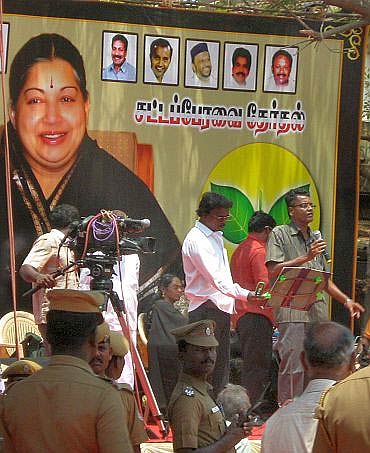 Though the stakes of both the Dravidian parties are high in these elections, J Jayalalithaa has a little more to lose or gain than the state's First Family, says Neerja Chowdhury

Early surveys had pointed to winds of change blowing in Tamil Nadu in the state assembly elections on April 13. But as time went on, political observers began to hedge their bets.

They were not sure about the extent to which money would play a role in the last hours before voting, despite the tough stand of the Election Commission. The 'Tirumangalam' formula was talked about openly and it has entered the political lexicon of the state.

The Tirumangalam by-poll in January 2009, in which the candidate fielded by the ruling Dravida Munnettra Kazhagam won, had witnessed the blatant use of money.

The Election Commission, which threatened an indefinite postponement of elections in constituencies where money was seized, has openly admitted that conducting elections in Tamil Nadu was the most challenging among the five poll-bound states.

The second factor which created an element of 'uncertainty' was the way rural voters would vote.  Kerala and Tamil Nadu traditionally vote alternately for two major parties or combines. In Tamil Nadu, the DMK and the All India Anna Dravida Munnetra Kazhagam come to power alternately.

'If Karunanidhi comes to power again, he will only help his family' 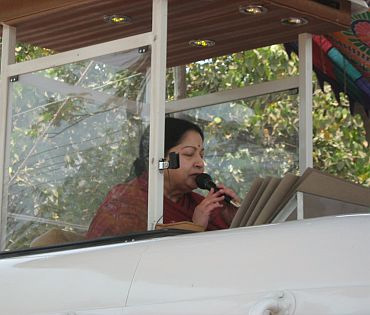 Since the DMK-led front won in 2006, the AIADMK-led alliance should win in 2011, with anti-incumbency taking its toll.

While waiting for AIADMK chief Jayalalithaa at a roadside meeting near the Kabali Eswara temple in Mylapore, Chennai, a group of women remarked sarcastically, "If Karunanidhi comes to power again, he will only help his family. If Jayalalithaa comes to power, she will serve the people for she has no family. And she will bring down prices, which did not soar like this when she was in power."

The 63-year-old AIADMK supremo campaigned across the state while traveling in her customised Tempo Traveller Van, whose roof opens up to allow a platform to rise, from which she addresses her supporters. Jayalalithaa looked far more energetic than she had appeared on television as she ripped into her opponent, urging the crowd to send "Karunanidhi and his family packing".

DMK has delivered on its poll promises 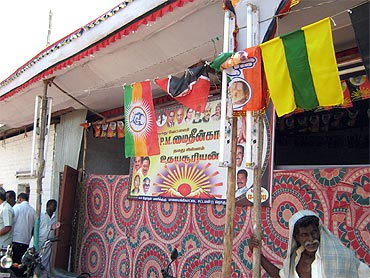 Jayalalithaa's victory or defeat will depend on the extent to which she can cut into the rural vote, where the social programmes launched by the DMK regime have had an impact.

The Rs 1 per kg subsidised rice scheme, the promise of 35 kg of free rice for poor families if DMK wins the elections, free colour TV sets given by the ruling party after the last elections, the 108 Ambulance scheme which ensures the arrival of an ambulance on the doorstep after dialing 108, the Kalaignar Insurance Scheme which enables even the poor to avail of facilities in private hospitals with the government paying the premium and the one lakh government vacancies filled with people registered in employment exchanges are some of the achievements of the DMK government.

What has added to the DMK's success, for all the corruption that exists in the state, is the delivery of the party's promises by an efficient bureaucracy. The process was overseen by the cadre of a well-oiled party machinery, which does not exist in other parts of the country.

It is an irony that the DMK, which was initially an urban party, with its hold among the intellectuals, is today rooted more in the state's rural areas. And the AIADMK, which drew its strength from rural areas during founder MG Ramachandran's time, is drawing its support from urban areas.

Alliances will be a key factor 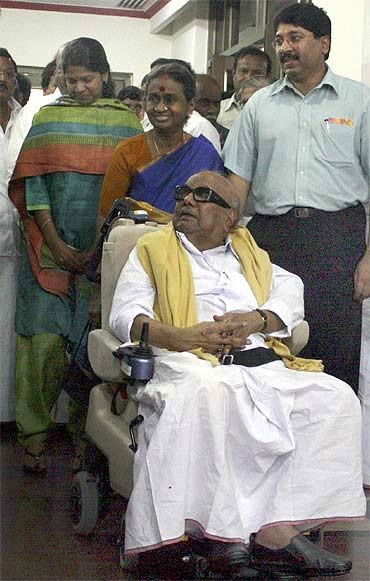 Tamil Nadu is one of the most urbanised states in the country today. That is why Jayalalithaa has moved from rural Andipatti, which she represented for two terms, to Srirangam, a temple town while Karunanidhi has shifted to rural Tiruvarur in his home district of Thanjavur.

Apprehensive about the effect of the 2G scam, his son M K Stalin has also moved to the semi-urban constituency of Kolatur from the Thousand Lights constituency in Chennai that he had represented over the years.

AIADMK supporters are banking on the fact that the so-called freebie effect will get neutralised because Jayalalithaa has not only promised incentives similar to the ones offered by Karunanidhi, she had added more. If the DMK chief had promised to provide a mixer to each household, she has added a grinder to it, calculated to reduce the daily drudgery of women.

The third key factor in Tamil Nadu is the alliances. Both parties have forged alliances, and these are crucial for victory because they add additional percentage points to the committed vote-bank of the party. The DMK has tied up with the Congress, the Vanniyarv community led Pattali Makkal Katchi, the Dalit-dominated Viduthalai Chirthaikal Katchi and a couple of smaller parties. 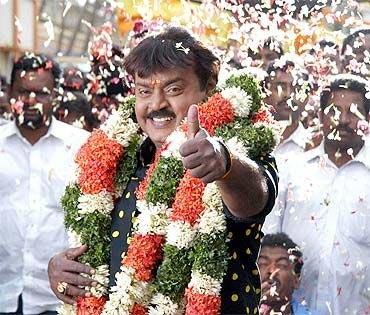 The AIADMK has aligned with actor Vijayakant-led Desiya Murpokku Dravida Kazhagama, which came into existence in 2005, the Dalit supported Puthiya Tamilagam, and the All India Samathuva Makkal Katchi, headed by actor Sarath Kumar.

Though both alliances are heavyweights this time, Jayalalitha ran into trouble with the exit of Vaiko's Marumalarchi Dravida Munnetra Kazhagam, which had supported her during the last five years. He broke ranks with her because she did not give him the number of seats that he had sought for his party.

Though the MDMK is not in the fray, its supporters, who exist in every constituency, are expected to shift their allegiance quietly to the DMK. Secondly, Vijayakant, with his erratic and violent behaviour -- he publicly beat up one of his candidates -- has lost some of his sheen.

Having polled 10 per cent of the votes last time, Vijayakant had begun to be viewed as a possible alternative to both of the Dravidian parties in the future.

But what is worsening his dwindling credibility is the campaign by comedian Vadivelu, who is working for the DMK and drawing large crowds by effectively lampooning Vijayakant.

The Congress is sitting pretty 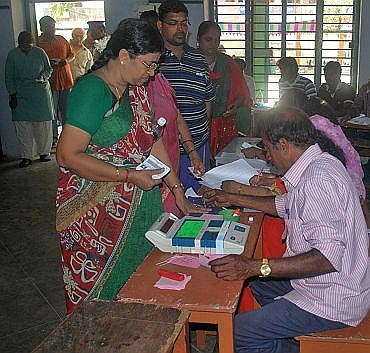 Though the stakes of both the Dravidian parties are high in these elections, Jayalalithaa has a little more to lose or gain.

A defeat in the assembly elections, after being out of power for the last five years, may make her party more vulnerable to erosion or even a split. The DMK's defeat will also unleash pulls and pressures, given the differences that exist within the 'Family'.

The Congress, whose lack of organisation has been all too visible, is sitting pretty, secure in the knowledge that both the Dravidian parties will woo the party in the 2014 Lok Sabha elections.

Even the defeat of the Congress-led United Progressive Alliance in Tamil Nadu will add to the stability of the ruling combine at the Centre. A defeated DMK, more dependent on the Congress, will be that much easier to control than a victorious DMK.