Sign in  |  Create a Rediffmail account
Rediff.com  » News » This is how we preserve the birthplace of a great writer 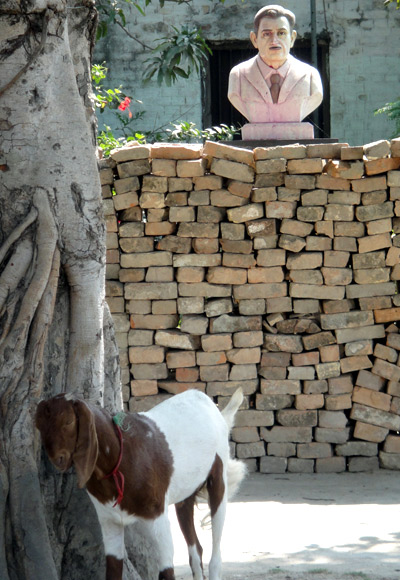 Image: George Orwell's bust at his birthplace, with pink stains from the colour thrown on it during Holi. Goats and pigs wander under it.
Photographs: Archana Masih/Rediff.com Archana Masih in Motihari, Bihar

The man who wrote two of the 20th century's greatest novels, Animal Farm and 1984, was born in Motihari. But few come to the sleepy Bihar town seeking George Orwell...

George Orwell was splashed with the colour pink on Holi. A few days later, it had turned a few shades lighter, streaks of which ran down his white coat-brown tie wearing bust behind an easy to dismantle wall in Motihari, Bihar.

"They were even trying to make him drink country liquor and put a necklace of empty liquor pouches before they left," says Aditya Abhishek, the young man who lives in the same house Orwell -- then Eric Blair -- was born in 110 years ago.

I am not sure how many get a chance to live in the house where one of the world's greatest writers was born, but Aditya and his mother are more concerned about the recent vandalism that has occurred in their backyard, where Orwell's statue is located.

"Sometimes people throw stones at it (Orwell's bust), that's why it's chipped in some places – once the tree outside the house was set on fire," continues Aditya, whose father Brijnandan Rai was an English teacher at the Gopal Sah School opposite, and was allotted this house as his living quarters.

Mr Rai passed away last year and his family continues to live in this run down house. They say the local administration, instead of building a road and a boundary wall around the area, should have made a secure gate and employed a guard for its safekeeping.

It was only recently -- almost 60 years after his best-known novels 1984 and Animal Farm were published -- that the Bihar government declared Orwell's birth place a protected site and constructed a boundary wall around the plot and a road.

Such is the slow pace of matters in a country which has lagged behind in preserving and promoting its own heritage, leave alone of an English writer who spent just a year after his birth in India. The Delhi home of Mirza Ghalib, one of Indian poetry's greatest treasures, has recently been opened to the public as a memorial after being lost in neglect for decades -- when goats and cattle used to freely roam around its verse-soaked walls.

Goats and pigs roam freely around Orwell's birthplace too. They sit by the wall near the statue, and amble into the house if the small gate made of bamboo is left open.

In the slimy, stagnant, water outside comfortably lies a family of pigs -- ironically, amongst the main characters in Orwell's ground-breaking satire on the Stalin era in Animal Farm. 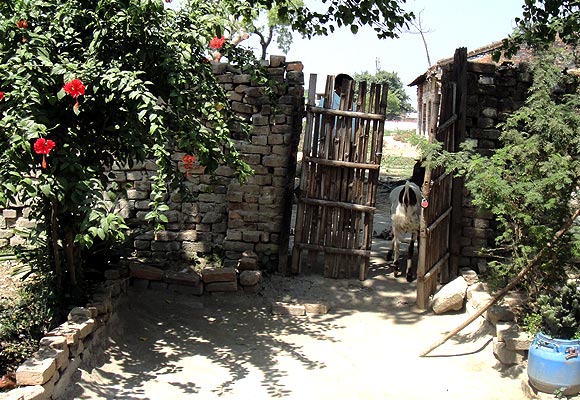 Image: On the other side of the bamboo gate is an old opium warehouse, its bricks stolen, lying in disrepair. Plans include making it into a library.
Photographs: Archana Masih/Rediff.com

It lies adjacent to another similar dwelling that has served as the residential quarters for the staff of the school for many years.

It was here that Orwell's father, Richard Blair, worked in the British Raj's opium department in Motihari. Vast fields in Bihar's fertile plains grew poppy and indigo, the latter being the cause of M K Gandhi's first act of civil disobedience against the British when he revolted against the exploitation of indigo farmers.

Opium extracted from the poppy flower was the biggest source of revenue for the British and across the house from where Orwell was born is a crumbling opium warehouse -- its bricks stolen to expose huge gaping holes.

During the 19th and early 20th centuries, opium was mainly shipped from Bengal -- Bihar was part of the Bengal Presidency till 1912 -- to China which reaped great profits for the East India Company. Amitav Ghosh's novel Sea of Poppies provides an incisive account of what the lives of opium labourers must have been in those days. 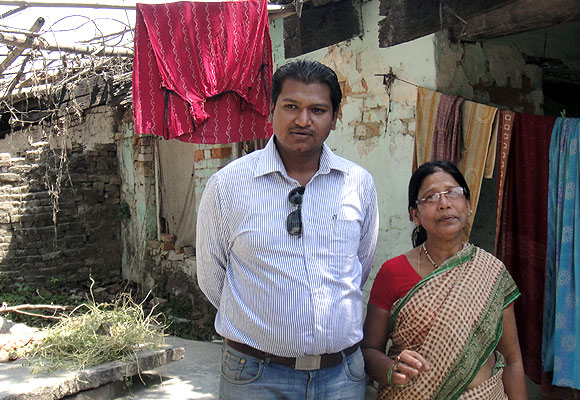 Image: Madhulika Rai and her son live in the house which was alotted to her husband, a teacher. Mr Rai passed away last year.
Photographs: Archana Masih/Rediff.com

The summer after Orwell's birth, his half French-half English mother Ida moved back to England with her two children.

But that was not the end of Orwell's association with British India. After getting an education at Eton, he joined the Indian Imperial Police in Burma where he stayed for five years.

Animal Farm and 1984, widely considered to be among the most memorable novels of the 20th century, were written in the last five years of his life. Orwell died a year after 1984 was published, aged only 46.

Madhulika Rai, the widow of the school teacher who was allotted this house, says her husband kept Orwell's books and shows us through her home which has a small courtyard with pots and flowers.

"There is a photograph of Orwell as an infant in this house. Some foreigners had once come and shown us a copy," she says, sitting on the parapet of an old well in the backyard that must have supplied water to the Blairs.

Inside, the two rooms are painted green, the plaster and paint pealing off. Rain water has left streaks where it has leaked into the thick walls. In places the walls bear big cracks. The toilet is outside, like it used be in many houses during the Raj.

The house, she says, is leaking and indeed looks in disrepair. Plans are in the offing to restore it, but the pace has been woefully slow.

The Rais say some people had recently come to assess the condition of the house which is far from what a fitting historical site should be.

If not for the efforts of Motihari's Lake Town Rotary Club, there wouldn't even be the statue or plaque outside that indicates that a great writer was once born here.

'I plan to make this place a monument to George Orwell' 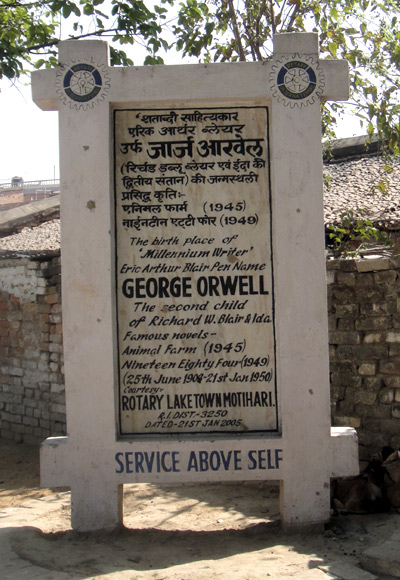 "There have been plans -- especially after Chief Minister Nitish Kumar's visit to Orwell's birthplace last year -- to restore the house, make a library, have a sound and light show, landscaping and construct a park," says Debapriya Mookherjee, the son of freedom fighter Lambodar Mookherjee, who was interned in Motihari by the British in 1942.

In his century-old house lined with an array of framed pictures of Indian luminaries like M K Gandhi, Vallabhbhai Patel, Bhagat Singh, Jawaharlal Nehru and Swami Vivekananda, Debapriya Mookherjee, a member of the Orwell Conservation Committee, patiently shows photographs of a commemoration at Orwell's birthplace where local government officials were also in attendance.

He also maintains a visitor's book bearing comments of the few who come to Motihari, seeking Orwell's birthplace. One of them is by the chief minister which reads: 'I plan to make this place a monument to George Orwell. I will come again' -- Nitish Kumar.

"A few days back the Archeological Survey of India looked at the site and will submit a blueprint in two weeks. I am hopeful the work will start soon," Mookherjee adds in a phone conversation later. 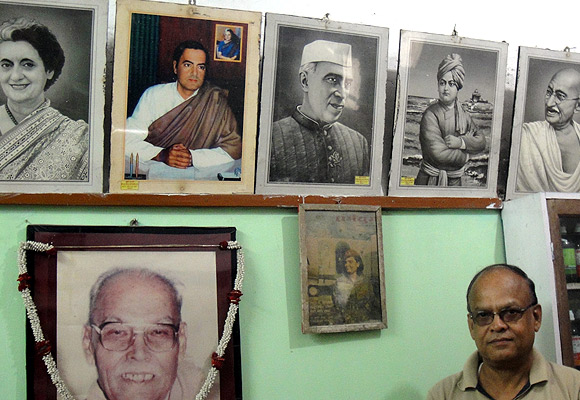 Image: Debapriya Mookherjee is a member of the Orwell Conservation Committee in Motihari.
Photographs: Archana Masih/Rediff.com

Mr Mookherjee also keeps a thick file of clippings and has been a persistent campaigner for the development of Orwell's birthplace.

He was disappointed when plans were afoot to establish a Satyagraha Park to commemorate 100 years of Gandhi's Champaran movement in the same campus as Orwell's house.

The construction of the park has been halted by the district magistrate for the time being.

"Why put Gandhi in a controversy?" asks Mookherjee. "There is sufficient suitable land in Motihari that can be developed as a Satyagraha park, why at Orwell's birthplace? Gandhiji had no link to that particular spot while Orwell was born there."

No one will only come to Motihari to see the Satyagraha park, he says. Those interested in Gandhi will go to Gujarat and Delhi; not to Motihari, he adds, but lovers of Orwell's work will be drawn from around the world to this little known town in Bihar.

"So is it not wise to build both sites well, but at separate places?" says Mookherjee, who hails from a family with deep roots in India's history. His freedom fighter mother Usha was imprisoned by the British in Bhagalpur jail where she gave birth to her daughter Jayati, one of the Indian Army's first lady paratroopers. 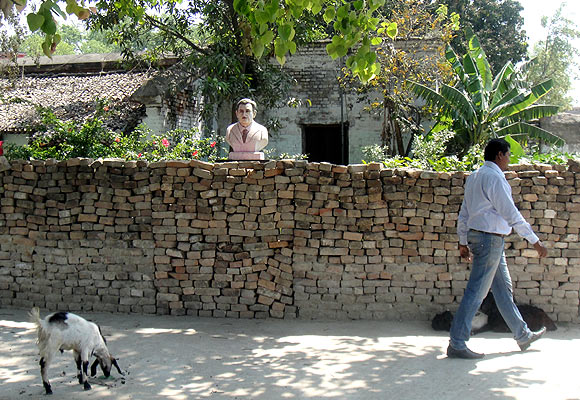 Image: A blueprint to develop Orwell's birthplace is expected from the Bihar government in two weeks.
Photographs: Archana Masih/Rediff.com

It was only in 1984, which coincides with Orwell's book 1984, that British journalist Ian Jack first wrote about the writer's birthplace.

'So far as I could discover, nobody in Motihari outside the district magistrate had heard of their town's most famous son. I don't scoff at this: Probably only 0.1 per cent of the population of Bristol have heard of Raja Rammohan Roy, though the great man is buried there,' Jack wrote in the article, which is part of a recently published collection of his writings on India, Mofussil Junction,

Motihari is still to claim its fame as Orwell's birthplace and nothing has been done to promote it so far. On the road that leads to his house, no board or sign indicates its presence; and when it is finally located visitors are confronted with a crumbling establishment.

Pigs and goats rest under his statue, while vandals desecrate it.

'We shall meet in the place where there is no darkness,' Orwell wrote in 1984.

Now that there appears to be some movement on the development of his birthplace as a monument, one finally hopes it is the end of darkness and neglect for George Orwell in Motihari.