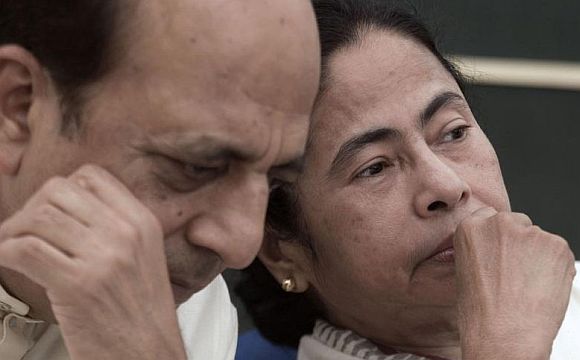 Dinesh Trivedi played a smart one, but not a very intelligent one, on Mamata Banerjee, but she is likely to have the last laugh on the issue, reports Sheela Bhatt

This is the story of the leader losing faith in his junior. She was suspicious, always, of his closeness to the Congress and he gave ample reasons to make her go mad. Trivedi was quite bold in the assertion of his personal views about his party, the United Progressive Alliance government and Banerjee's mercurial temper. Through some members of the Bengali media in New Delhi, she was well-informed about Trivedi's views on her.

Many reports suggests WRONGLY that 'Mamata is punishing Trivedi for raising the railway fares'. In fact, sources in the Congress told rediff.com, "We were expecting him to go much before the railway budget. It didn't happen, so we believed that he will be asked to go amicably after the budget session."

The Congress thinks that Trivedi didn't tie up his exit plans well, creating an avoidable crisis for the government in the process. 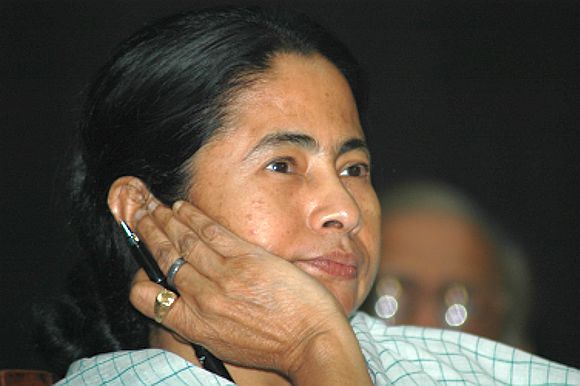 It is very significant to note that Banerjee's ire against Trivedi has been compounded because of the real political issues she is facing everyday in Kolkata.

It is a well-known fact that the Left-led government of West Bengal has handed over a bankrupt state to Mamata. She is not in a position to plan or execute any big development plans because she has to pay a hefty interest on the debt. West Bengal has over Rs 2.04 lakh crore of debt piled up, making it the state with the highest ratio of gross state domestic product to debt in India.

The state budget of 2010-11 said that Rs 15,000 crore was going towards debt servicing. Imagine Mamata's predicament at having only Rs 5000 crore in hand to invest in development activity.

She is seeking a moratorium on the payback plan. Prime Minister Manmohan Singh is well aware of her predicament in running the state. She is, essentially, a populist leader who needs a special budget for her populist ideas. The Centre has a problem in agreeing to Mamata because Punjab and Kerala are also in a similar financial mess, and the moratorium on huge interest will have to be given to these two states too. 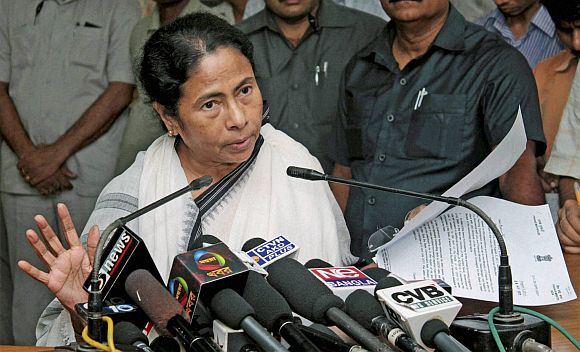 Mamata has defeated the Left parties in an historic assembly election. Obviously, her next and prime target is the Congress in West Bengal.

The Congress can't, for obvious political reasons, grant such a big favour to West Bengal. Mamata, on other hand, is impatient because without some space to plan dynamic schemes to woo voters, she can't sustain the goodwill of her constituents.

Her critics are already writing that her popularity graph is on the decline due to micro-management of governance and lack of direction on macro issues.

The combination of all the above issues has convinced Mamata that Trivedi is not her best bet to pursue her plans in New Delhi, to bargain for the best possible terms by securing more funds from New Delhi, even though she will march on with her plans to hit at the Congress's turf inside West Bengal. 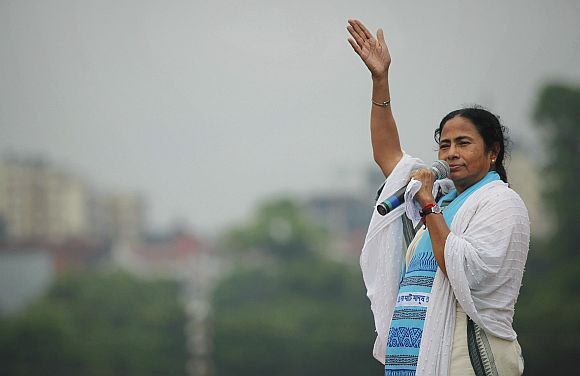 In this tough battle, another angle is added due to Banerjee's prime ministerial ambitions since the Congress's stock is plummeting fast. Like Tamil Nadu Chief Minister Jayalalithaa, she would prefer early polls to gain maximum advantage.

The TC has 19 members of Parliament but Mamata thinks that if elections are held now she will get many more seats in the LS and will be much a bigger force in national politics in the new set-up. In view of her own popularity facing multiple challenges, she is impatient and wants early elections.

Another minor issue in the evolving drama is that Trivedi is member of Parliament from Barrackpore where Muslim voters are the most important strategic voters.

Trivedi, who has generated goodwill among Muslim leaders in his constituency, is convinced that the Trinamool Congress now or after the Lok Sabha polls cannot side with the National Democratic Alliance led by the Bharatiya Janata Party due to the sensitivity of Muslim voters of West Bengal.

This makes him suspect in the eyes of Mamata who is convinced that the UPA has lost steam and all options should be open before her. 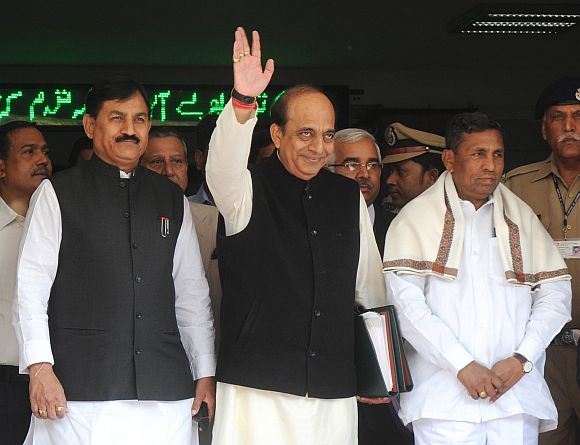 Compared to Mamata's vision, Trivedi has diagonally opposite views on development, financial management, the future of TC, handling of the Muslim vote bank in Bengal and on having truck with the BJP. The source in Congress says, "It is very much possible that Trivedi must have thought, on the eve of the railway budget, why not to go down after earning the status of shahid?"

Trivedi is using and playing with Mamata's unpopularity among the New Delhi media smartly. The source in Congress says, "It is anybody's guess if there was 'match-fixing' between Mamata and Trivedi to allow him to present the railways budget and then leave on the issue of the hike in passenger fares."

It seems the luxury of parting amicably is not available to Trivedi after his aggressive interviews on television on Wednesday. Trivedi has linked the fare hikes to national interest and is saying that for him the party, meaning Mamata, is less important than the nation and his family.

If at all there was some pre-decided arrangement between Mamata and Trivedi, it broke down midway on Wednesday.

Trivedi played a smart one, but not a very intelligent one, on Mamata, but she is likely to have the last laugh on the issue. That is, on the issue of taking the side of the aam aadmi in the political battlefield of West Bengal where she faces the Congress and the Left parties.