The Pope at the Beach 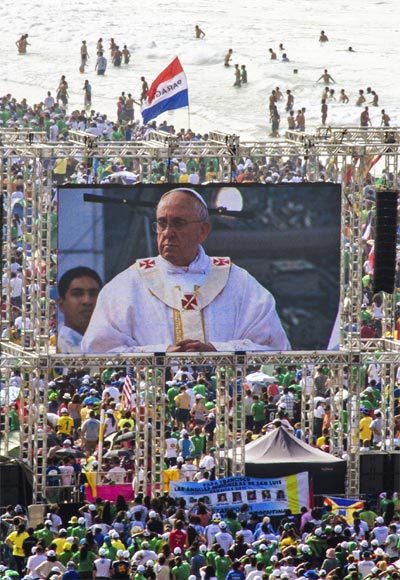 Argentina and Brazil are traditional rivals and there was a time when their antagonism was being compared to India-Pakistan relations. They have overcome to a great extent their history of hostility.

That an Argentinean Pope was so warmly embraced in Brazil shows that his great office does transcend such divides, notes B S Prakash, India's former ambassador to Brazil.

There were huge congregations of a very different sort at the famous at Copacabana beach in Rio de Janeiro in the last week of July.

Crowds gather easily in Brazil as they do in India. Only recently Brazilians surprised themselves and the world by massive demonstrations on the streets in protest against the apathy and corruption of the Establishment.

Visits by stars like Sting or Madonna lead to tens of thousands flocking to the white sands of the crescent shaped Copacabana, as I had witnessed during my time there.

Football at the legendary Maracana stadium is another huge crowd puller.

But the events at the end of July were different. It was the Pope visiting a very important part of his constituency and creating a new image for the Vatican and for himself in the process.

Brazil has the world's largest number of Catholics 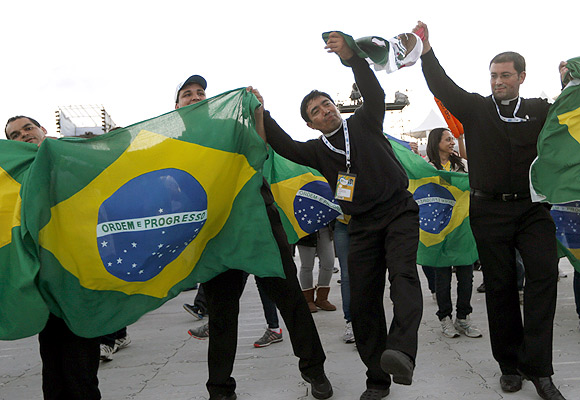 There were many firsts to take note of in this visit.

Cardinal Bergoglio from Argentina, now known as Pope Francis, after ascending to his position recently, is the first-ever Latin American to become Pope.

Brazil with its population of nearly two hundred million people has the world's largest number of Catholics.

Further, this was Pope Francis's first foreign visit and therefore what he said and did was watched keenly not only by the adherents of that faith all over the world, but also by other commentators interested in the semiotics of the Vatican.

Being blessed by the Pope is no doubt a cause for intense joy and celebration for the Catholic faithful, but for the rest, the issues underlying the visit and the outcomes are noteworthy.

In all Latin America, only Brazilians speak Portuguese 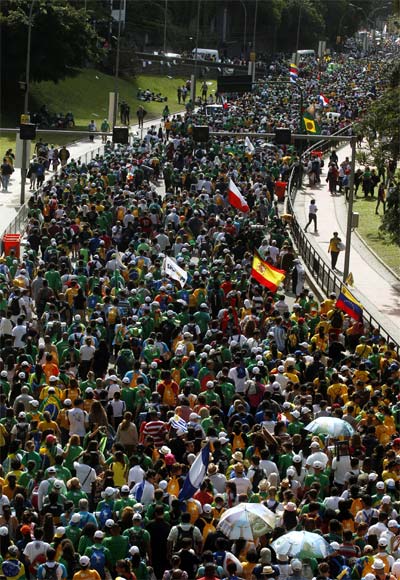 The Catholic church has its largest and most devoted constituency all over the continent of Latin America.

History has made it so since the two countries that colonised that vast continent, Spain and Portugal, were fiercely and decidedly Catholic.

Along with the first sailors arriving on their shores, priests spreading Christianity also came and proselytising has been an integral part of the colonisation process.

Not only that, even the division of the continent geographically and the sway of the empire had been influenced by the Vatican.

Why is it that in all of Latin America, only Brazilians speak Portuguese and the rest Spanish?

This was due to a decision by Pope Alexander in 1494 who directed an arrangement whereby to prevent Spain and Portugal from fighting with each other, it was agreed in a treaty that all territory in the new continent west of a certain line was to be controlled by Spain and to the east of that line, by Portugal. (The hugeness of Brazil resulted in it alone being cast with Portugal.)

Loyalty to the Catholic church has been declining 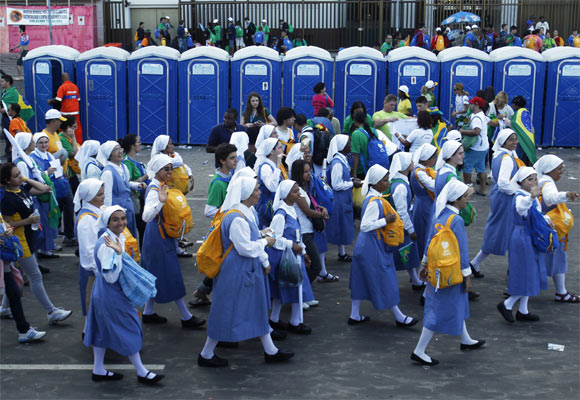 Over the last five centuries the Latinos have been devoutly loyal to the Vatican. But this loyalty and devotion to the Catholic church has been declining over the last few decades.

There are several reasons apart from the universal trend of declining religiosity. Latin American countries in general have had glaring inequalities and till the rise of the Left in recent decades, an exploitative ruling class.

Till the eighties military dictators ruled over many countries including Brazil and often there was a collusion of interest between the ruling elite, the privileged rich and the influential Church.

On the other side were the long suffering poor devoted to the Church but without its benevolent support. The period saw the emergence of what is termed 'liberation theology' with some clerics siding with the poor and also being sympathetic to the Marxists.

In many cases the local Bishops thus had pro-Left political leanings frowned upon by the Vatican.

In a criticism of the 'liberation theology' in 1984 the Vatican decreed that the Bishops should concentrate on the individual sin and suffering and not on social and institutional ills.

These issues seem to have receded somewhat, but whether the Church has a demonstrable pro-poor sympathy is still a crucial question in a region with huge disparities.

The Pope came to a Brazil that had seen turmoil recently 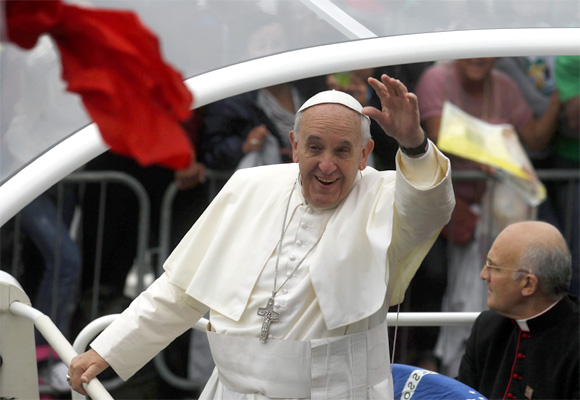 Another factor is the growing popularity of the evangelical churches with new doctrines and practices, quite different from the traditional Catholicism.

In Brazil alone, the percentage of Catholics has come down from over 90 per cent a few decades ago, to around 70 per cent.

Some of these movements have been imported from America, some are home grown and some are expanding fast with affluence and political influence.

They pose a challenge to the traditional claims and clout of the Vatican.

Third, the Pope walked into a Brazil that had seen considerable turmoil recently with massive protests (analysed by me earlier in this space).

It is evident that he was addressing an audience troubled with corruption in high places, apathy of the Establishment, and clamouring for greater social justice. 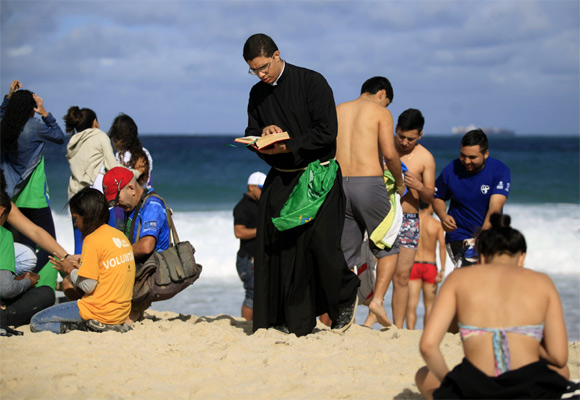 Now that the visit is over, it would appear that Pope Francis seems to have won the hearts and minds of his followers.

In his speeches, gestures and public acts, hugely important for a Pope, Francis showed his sympathy and solidarity with the poor.

He visited a large slum, the infamous favela of Brazil, and talked about inequality and social reforms. He seemed accessible, keen to mingle and not too insistent on protocol.

The fear that the street protests would mar the Papal visit did not come to pass. Both the Church and the government in Brazil seem to have benefited.

2 million waited for the Pope on the beach 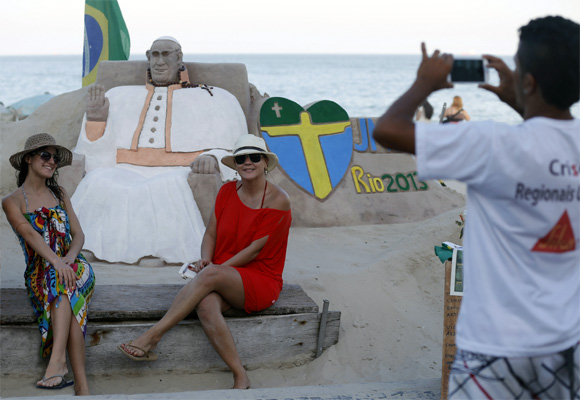 Beginnings are important for leaders and clearly the Pope has a large following. As the Brazilian newpapers reported there were two million people on the beach and 'rosaries' instead of bikinis on Copacabana.

The Pope effectively did his work.

One final word in the Indian context. Argentina and Brazil are traditional rivals and there was a time when their antagonism was being compared to India-Pakistan relations. They have overcome to a great extent their history of hostility.

That an Argentinean Pope was so warmly embraced in Brazil shows that his great office does transcend such divides.

B S Prakash is India's former ambassador to Brazil. He is currently a visiting Professor at Jamia Milia University, Delhi.