The man who made Jayalalithaa's sculpture in BLOOD 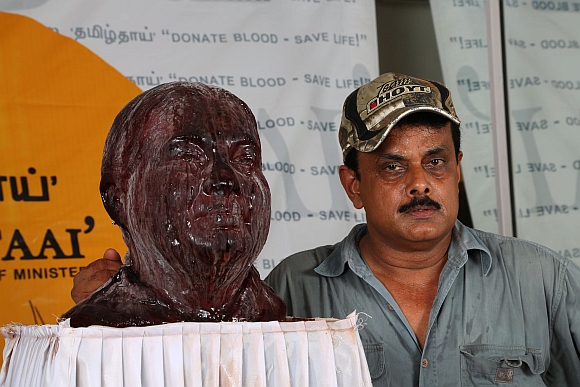 There was a time the huge sculptures created by martial arts man Shihan Hussaini stood like giants on the terrace of his house facing the sea. Today, high rise apartments block them from looking at the sea but that has not diminished the spirit of the man, for the statues grew bigger and bigger and also sensational.

Shobha Warrior talks to the martial arts expert and artist.

Unlike the majority of the people, Hussaini is frank about his intentions and admits that he likes to shock people and create sensation. "I like to grab attention through sensationalism. Call me an attention seeker. I have no problem. Everybody wants attention and appreciation, and I am no exception."

His latest act of sensationalism is sculpting the bust of the Tamil Nadu chief Minister J Jayalalithaa in blood. It is not the first time he has shown his admiration for the lady in blood; he had done a portrait of her in blood. But this time, it needed lots of blood and the preparation started years in advance.

Most people were shocked when he unveiled the dark blood red image of JJ on her birthday last month and he was called crazy and a sycophant. "Yes, the first allegation against me is that I am a sycophant. The second is, I waste so much of blood on a sculpture. About the first allegation: I am not in the All India Anna Dravida Munetra Kazhagam and I have nothing to gain by pleasing her and I don't expect anything from her." 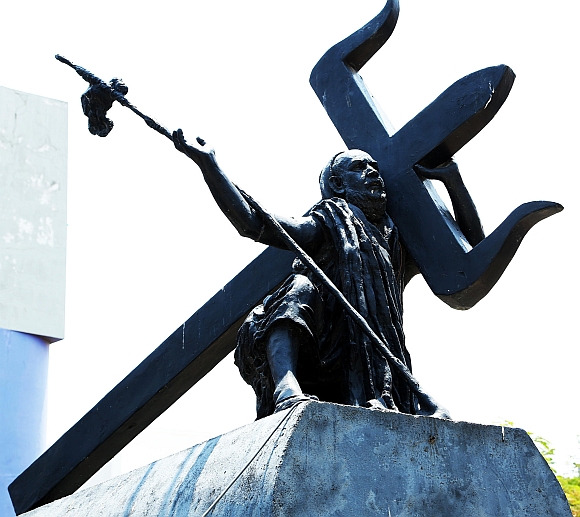 But why a sculpture in blood of Jayalalitha and not anybody else?

"Because I adore her. I admire her. My question is, why not Jayalalitha? I have been a martial artist, a fighter all my life. I see her as a fighter, a lonesome warrior! She has the kind of courage only warriors have! I admire the courage in her. She is like my Guru."

But why a sculpture in blood?

"What is the most personal thing that you can gift someone? Your own blood! With what can you convey from the depth of your heart? Blood, of course. Everybody has done statues on solids but nobody has attempted a sculpture in liquid except ice sculptures," he says.

"Yes, before me, Mark Quinn has done something like this where he took an impression of his head, put his own blood and froze it. That was many years ago. I came across information about him after I did the statue. What he did was life casting but mine is the first sculpture in the world made of a liquid."

For Hussaini, blood is not the medium he used to sculpt Jayalalitha's bust. The medium is 'sensationalism.'

"My first sensational statue was that of Kalpana Chawla. Her death created a sensation all over the world. My statue was my desire to bring her back to earth. The next sensational statue I did was that of Sankaracharya after he was arrested by the Jayalalitha government. I called it Curse and Cross- Satyameva 'Jaya'te. I had also made a statue of Veerappan and a day before I was to unveil it, he was shot dead and it created a huge sensation." 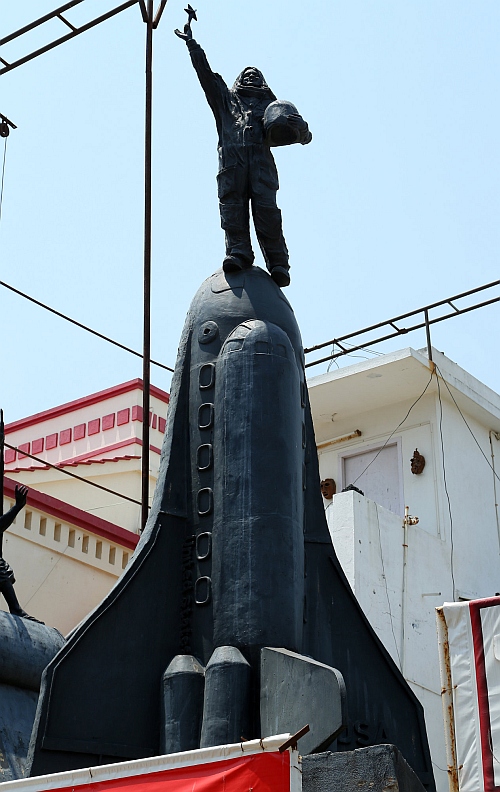 Hussaini feels that if he had done the sculpture of Jayalalitha in any other medium, it would not have got the kind of attention it got from all over the world.

He also argues that he was not wasting blood by making a sculpture as throughout his life, he has been donating blood every three months. But this time, he started taking blood from his body on his own from 2004 and storing it in bottles in a deep freezer. This process continued for eight long years. By 2012, he had enough blood to make an entire sculpture.

After unveiling it in Chennai as Thamizh Thai and creating a sensation and getting more brickbats than bouquets, he plans to take it to Delhi to exhibit at the Lalit Kala Academy as 'Mother India'!

But the message he wants to spread is, "Donate blood. If one man can take 24 units of blood to make a statue, why can't you also give 2 units to save three lives?"

But it is enough of blood tributes to Jayalalitha from now on. But that does not mean that he would not use blood to express himself as an artist. "Blood provokes and disturbs . A sculpture in blood can provoke and create a sensation. Like I said and believe, I am an artist looking for sensationalism."

Hussaini would like to be described as a man with several missions and spreading the message of blood donation is just one of them. "I call it Hu-Missions. I like to be called Hu now and not Shihan Hussaini but people do not know who this Hu is. Till now, I was a He-Man but hereafter, I want to be a Hu-man!"

Not only when sculpting but while talking also, Hussaini, oops! Hu looks for sensationalism!