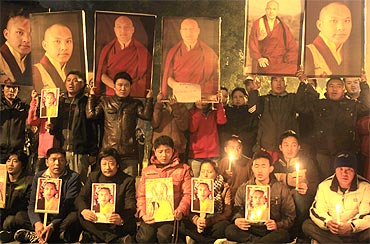 It made headlines for 'news breaking' channels when the Himachal Pradesh police seized foreign and Indian currency worth Rs 4-5 crore, stuffed in four large metal boxes, from a room of the Gyuto Monastery, the seat of Ugyen Trinley Dorje, the seventeenth Karmapa. The monastery is located near Dharamsala, the seat of the Dalai Lama and his Tibetan government-in-exile.

Shakti Lama, a person working in the monastery, was arrested following the police raids which came a day after Rs 1 crore in cash was found in a vehicle intercepted in Una district bordering Himachal Pradesh (a Dharamsala-based businessman, KP Bhardwaj, has been arrested in connection with the cash and an alleged land deal with the Karmapa's Trust).

Soon after the raids, HP Director General of Police DS Manhas declared, "The police have nothing to say about the institution. We are only concerned about the illegal cash recovered after the searches."

Because the currency notes seized from the monastery were from nearly 20 countries, including China, the media started speculating, "Is the Dalai Lama's successor a Chinese agent in India?"

'Allegations against the Karmapa grossly speculative' 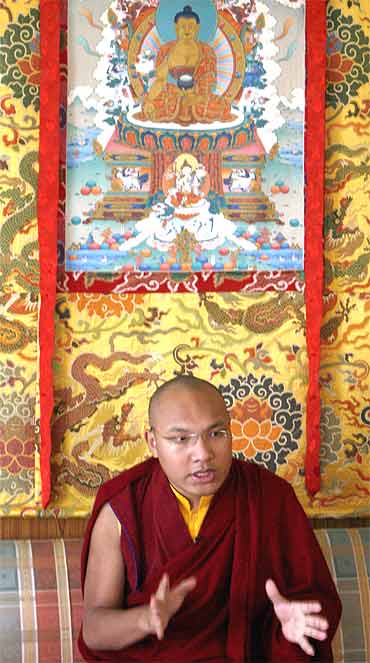 According to some reports, the 26-year-old spiritual head of the Karma Kagyu sect, had spent large amounts of money last year on the people affected by the cloudburst in Leh and landslides in Himachal Pradesh. The media immediately extrapolated that the Karmapa was a Chinese agent trying to spread China's influence in the Himalayan belt.

One report said that 'Delhi' (who is Delhi?) sees this "as part of a plan to spread Chinese influence in the Indian Himalayan region much the same way as Beijing has done in districts along the India-Nepal border where the Chinese have opened 17 China study centres."

In the meantime, the Karmapa's office issued a statement refuting allegations about the China link, terming them 'grossly speculative'.

"We would like to categorically state that the allegations being leveled against the Karmapa and his administration are grossly speculative and without foundation in the truth. We categorically deny having any link whatsoever with any arm of the Chinese government," said the statement.

The office of the Karmapa explained that the cash was "offerings received for charitable purposes from local and international disciples the world over. Monasteries across the world receive offering from devotees in various forms. There is nothing surprising, new or irregular in this." 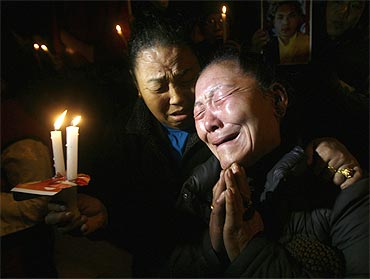 Image: Tibetan exiles weep during a candlelight vigil in support of the Karmapa Lama in New Delhi
Photographs: Parivartan Sharma/Reuters

The cash found in the monastery probably partially comes from donations/offerings received during the celebrations to mark the 900th year of the birth of Dusum Khyenpa, the first Karmapa: "Nine hundred years ago, amidst the snow-capped peaks of eastern Tibet, there was born a spiritual master whose compassion for beings would shape the future of Buddhism in Tibet. This great being was the First Karmapa, Dusum Khyenpa, who instituted the practice of intentionally reincarnating in a way that disciples could recognise him."

Ugyen Trinley, the successor of Dusum Khyenpa, presided over the two-day celebration held in Bodh Gaya, attended by thousands of followers from India, Tibet, China and the West.

The statement added, "Any suggestion that these offerings were to be used for illegal purposes is libellous. All our dealings across the world are honest and completely transparent, anything else would be contrary to the Buddhist principles that we live by."

However, were proper accounting procedures followed? Were the monks aware of the intricacies of the Foreign Exchange Management Act? Probably not.

'Many people send large amounts of money to the Lama' 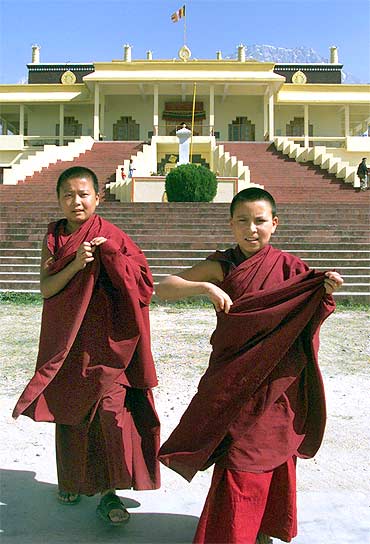 One explanation for this huge amount of cash is that since January 2000, the Karmapa has been temporarily accommodated on the top floor of the Gyuto Tantric Monastic University near Dharamsala.

The Tibetan government-in-exile admits that the Gyuto monastery was in the process of acquiring a piece of land at Sidhabari to build a new monastery. A Tibetan official told the press: "For this, the Himachal Pradesh government was also approached to get clearances."

The problem is that it is practically impossible for non-state subjects of Himachal Pradesh to purchase land in the hilly state. Was the Karmapa's office planning to use these 'offerings' to get this piece of land? It is possible.

Penpa Tsering, president of the Tibetan parliament-in-exile, told the press. "I think all this happened mainly because people don't know the law. It is not like we are doing this because we want to break the law. Many people send large amounts of money to the Lama as a token of respect. If anybody is trying to talk of any conspiracy, it is totally unwarranted".

The speaker of the Tibetan Parliament also said: "there is no basis of media speculations linking the Karmapa Lama with the Chinese government".

The lack of knowledge in accounting is in itself a serious offence, but it does not imply that the young Lama is a Chinese agent. 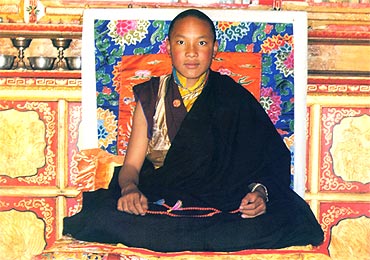 Everyone remembers how the 15-year old Karmapa, in a Bollywood-type escape, reached Dharamsala in January 2000 after crossing the highest Himalayan passes in the midst of winter. The Indian government was initially reluctant to grant him refugee status.

At that time, some believed that he had been 'planted' by the Chinese government to create confusion over the Sikkim issue (Beijing 'recognised' the state as a part of India only a few years later).

Things became more complicated when a dispute erupted with another 'Karmapa' claiming the throne of Rumtek monastery in Sikkim. The previous Karmapa, 16th of the lineage, was one of the most revered Lamas of his generation. A powerful yogi, he impressed all those who approached him with his profound wisdom and an aura of strength and peace.

When he passed away in 1981, he left his monastery of Rumtek in Sikkim as well as hundreds of Dharma centres in India and abroad in the hands of four regents who were to provide spiritual guidance to the Karmapa's followers, until his 'return'.

Indian officials convinced he has been 'planted' by China 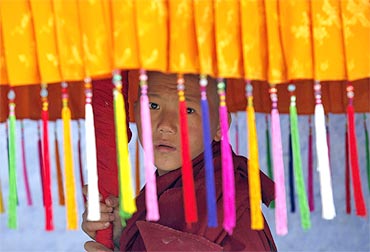 Image: A young monk holds a traditional parasol as he waits for the arrival of Dalai Lama in Pemayangtse monastery in Sikkim
Photographs: Rupak De Chowdhuri/Reuters

When Situ Rinpoche, one of the regents, discovered a letter of prediction said to have been written by the old Karmapa prophesying his rebirth in eastern Tibet and giving the time of birth and the name of his parents, a dispute erupted between Situ and another regent, Shamar Rinpoche, who did not approve of Ugyen Trinley Dorje's selection.

The bitterness between the Rumtek regents took an ugly turn in 1992-93, when serious law and order problems occurred on a few occasions and a petition was filed in the Sikkim high court praying for an injunction to stop the recognition of the 17th Karmapa. More infighting was reported in 1994 when Shamar enthroned his own Karmapa, Thagye Dorjee.

In the meantime, after conducting the necessary tests, the Dalai Lama gave his seal of approval to Ugyen Trinley Dorje. About the same time in Beijing, the Chinese leadership -- who by then had the boy in their hands -- also decided to recognise him as the 17th Karmapa. It was the first time in the history of a Communist regime that a 'reincarnation' (called 'living Buddhas' by Beijing) was officially recognised.

From the day the Karmapa arrived incognito in Dharamsala in 2001, many Indian officials have been convinced that he had been 'planted' by the Chinese intelligence to create some mischief in India, particularly in Sikkim.

'The broader issue is of the Karmapa's basic human rights' 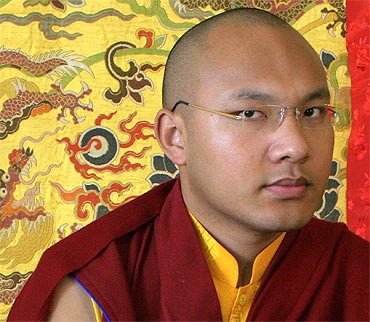 In July 2010, the Karmapa, who was scheduled to attend functions organised by the Karma Triyana Dharamchakra centre in New York, was refused permission by Indian authorities to leave the country. Earlier in 2010, the young Lama had already been denied an exit visa to impart religious teachings in nine European countries.

At that time, there was a lot of speculation that the Shamar camp had exercised pressure on Delhi to cancel the visits. Dharma centres are big business in the West and Shamar is not ready to abandon the lucrative opportunity for his protege. Many speculate that he did tip off the police about the cash kept in Dharamsala.

The Karmapa's foreign followers, in their enthusiasm, did not exactly help in alleviating the suspicions of Indian agencies. A petition originating from some Dharma centres in the US, circulated in April 2010, was addressed to Congress president Sonia Gandhi.

"We believe the Indian government's actions in this situation are inequitable and unjustified. The broader issue, which we address, is one of the Karmapa's basic human rights," stated the petition. It spoke of a blatant abuse of his freedom for religious expression and requested the government of India to address the unlawful confinement of the Karmapa. 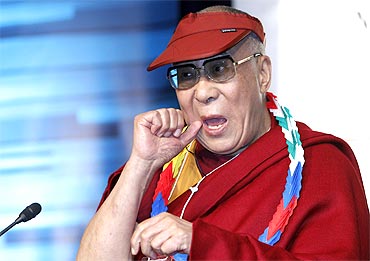 Fortunately, the office of the Karmapa later rectified the wrong impression given by these Western disciples.

Another complicating factor is the media (Indian and foreign), which often tries to project the young Lama as the Dalai Lama's political successor. The media forgets that the present Dalai Lama has ceaselessly worked from the early 1960s to introduce democracy in the exiled community. To have a 'political successor' would negate all these years of hard work. Would a 'political successor' prevail over an elected prime minister whose election is due in March? Tibetan democracy would then become a laughing stock.

During a visit to Rumtek (Sikkim) last year, I asked the caretaker of the monastery, "Why does the Karmapa have to go through all these unpleasant problems?"

He philosophically answered: "Don't worry, he will go through them, but it is a very old, very ancient karma that he has to unknot; these things take time. It can't be solved in one day."

In the meantime, the young, extremely bright Karmapa, who is deeply devoted to environmental issues in the Himalayan region, should teach his staff proper accounting ways.