'There is enough enthusiasm for another anti-corruption campaign' 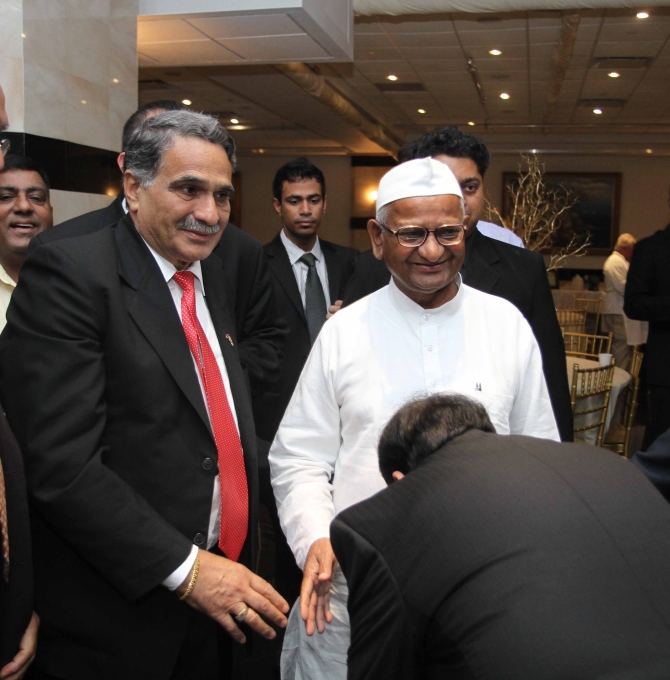 In an exclusive interview with rediff.com's Aziz Haniffa on August 21, in Glenn Dale, Maryland, at the home of Indian American community activist Om Sharma, who hosted a dinner reception in honour of Hazare, the 76-year-old social activist declared that an integral part of his visit to the US was “to have an international platform” for his anti-corruption message.

This correspondent posed the questions to Hazare in English and he replied in Hindi. His replies were then translated into English by Sachin Narode, a medical researcher at the University of Pennsylvania in Philadelphia, who is his chief handler in the US.

Hazare denied that the initial energy and enthusiasm his anti-corruption drive had elicited and the critical mass the campaign was able to muster had dissipated.

He predicted that if the government doesn't enact the Jan Lokpal Bill in the monsoon session -- which, he admitted, was an unlikely option -- he would start his agitation again.

“There is enough enthusiasm among the people for another campaign like the last one,” he said.

“People this time will come in larger crowds -- much more than before,” he said, and added, “I am working hard for over six months and I totally know that the government cheated and deceived me. The movement is gaining more strength; we will start our agitation in the next winter session if the government doesn’t agree to enact our bill.”

Asked if there was any hope that Prime Minister Manmohan Singh and the government led by him would eradicate corruption -- as he had pledged to do -- or if it is so embedded and entrenched that this government had to go, Hazare said it doesn’t matter which government is in power.

“Changes don’t come simply by changing a government and having a different government,” he said.

“We have to wake up the people and the masses and bring the right kind of leaders with a moral character who will change the system -- not the government,” he said.

Hazare reiterated, “The government doesn’t matter and I don’t like to play the game of party politics -- I don’t support that. One (government) will go and another will come but not much change of system can be brought about by this.”

'Everybody has to fight corruption' 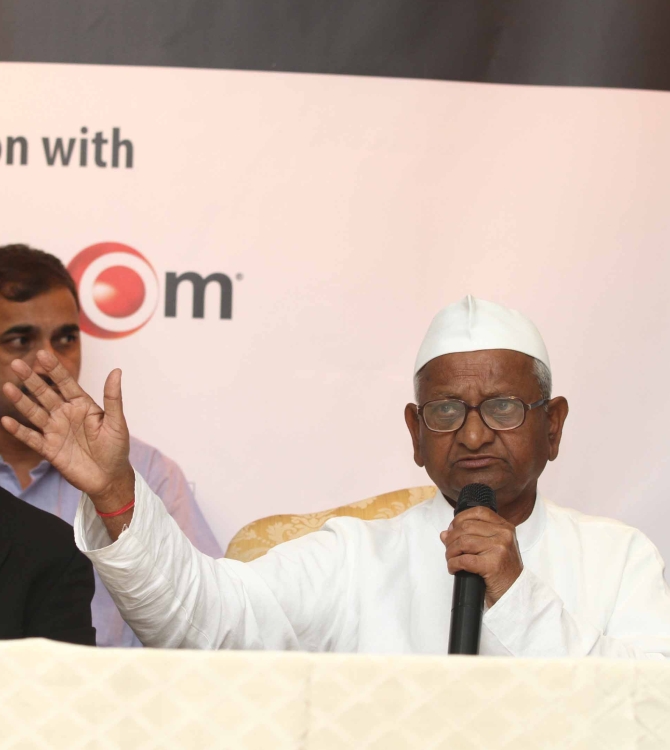 When asked if he expected any change for the better if a government led by the Bharatiya Janata Party were to come to power under the leadership of Narendra Modi as prime minister, Hazare was diplomatic and even circumspect.

“There will be no change as far as corruption is concerned unless there is leadership with moral character,” he said.

He continued to argue, “It doesn’t matter which party is in power or who is the prime minister,” whether it is Modi or anyone else.

“That will not affect change -- change will have to come from within,” he said.

“I believe people should change and political parties will not bring that change. I have total faith in the Constitution,” Hazare said, and noted that under the Constitution “a party or parties don’t even exist.”

Hazare said, “I am trying to change people and the masses to do better governance and to bring in the right moral character and right leader, not with the party but with individual support.”

“So, it doesn’t matter which party is in power and who is the prime minister. I believe candidates have to be on their own and not attached to any party,” he said.

Asked why Indian Americans or the Indian Diaspora should care or support the anti-corruption campaign he is waging because Indian Americans owe their fidelity to the US, Hazare shot back, “Aren’t all of their relatives in India -- their birth country? Everybody is suffering there -- would you like that people in India should suffer?”

He argued that “corruption is not a country issue,” it was not exclusive to a particular country.

“It is universal -- it is a global problem. If you are thinking you are not touched by it, it is unfortunate. You are touched by it,” he said.

Hazare declared, “It’s a world issue and so you can’t term it as an Indian American or American or Indian (issue)….They all have to care. Everybody has to step up, roll up their sleeves and fight this.”

Earlier, Hazare, who arrived from Philadelphia in a limousine replete with a security detail and bodyguard, was mobbed by several hundred guests.

They had traveled from all across Maryland, Virginia and the DC area, and were jostling to touch and kiss his feet and take photographs with him.

There was no indication of the ‘Hazare phenomenon’ fizzling out among Indian Americans, several of whom had gate-crashed the dinner reception, since Sharma had only invited a few “elite guests, to meet, greet, listen, speak and have an interaction with Anna Hazareji.”

At several points, the jostling for pictures got so bad that when Hazare’s security detail and his aide Bishambar Chaudhary tried to push back some of the guests, it almost ended in fisticuffs. The host had to implore the angry guests not to engage in anything untoward.

'I am married to the people of India' 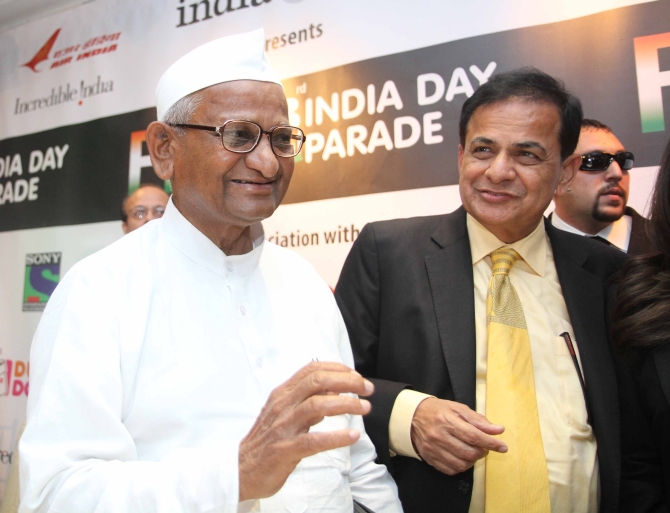 Hazare, in his remarks to the guests, was gracious and profusely thanked them for coming (because apparently it was a fund-raiser too to underwrite parts of his US visit).

He spoke of how, at the age of 26, he had decided not to get married and had devoted his life to nation-building.

“I started this struggle for nation-building, to end corruption,” he said.

“I am married to all the people of India. I have adopted all of India and all of India is my family and I feel very happy about it,” he said.

“If I would have married, I would not have been a social worker and activist. But now I am fighting everyday because I cannot tolerate the poverty and the corruption and life being so difficult for the common man. I have dedicated my life for all these people,” he said.

Hazare said, “I am not going to die and I am going to keep fighting every day of my life till the Lokpal Bill is passed.’

He said, “I live in a temple -- in a very small place,” adding, “I have no blood pressure problems, no diabetes”.

To much laughter from the audience, Hazare observed that the rich and mighty in India, with all of their ailments and diseases, must be very envious of him.

Hazare said he had been the recipient of the Padma Bhushan and several awards from across the world. He had invested the lakhs of rupees he had received with these awards.

With the accruing interest on these investments, he was helping the poor and the underprivileged to get an education, provide for their health and get married.

Hazare kept reiterating that he had been ‘deceived’ by the government led by Dr Singh.

He pointed out that during his first hunger strike, Dr Singh had written to him, promising to table the anti-corruption bill and push for its enactment, which had not been done.

He said he had received another letter from the PM, assuring him that the bill would see action in this session, but that seemed to be unlikely.

“I am going to do another fast at the Ramlila Ground because I want to see the bill passed in the winter session,” he said.

Hazare said he had been preparing for his campaign for months. He had logged over 28,000 kilometers across the country. The campaign, when it begins again, would be spread across the length and breadth of India.