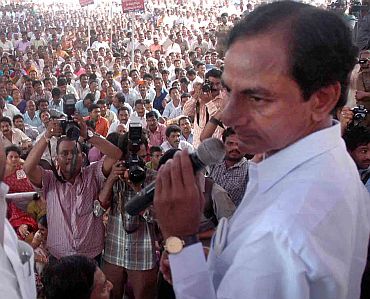 Even as the top leadership of the Congress party in New Delhi was busy in confabulations to find a way out of the mess in Telangana region of Andhra Pradesh, its state government seems to be inching for a confrontation with the agitators.

Though the Kiran Kumar Reddy government has fallen on its face in its attempt to break the strike of Road Transport Corporation employees by engineering a split in the National Mazdoor Union, the strike continued on Tuesday and very few buses could ply in Hyderabad and nine other districts of the region.

On the other hand in another indication of the government hardening its stand, the police have booked serious cases against the Telangana Rashtra Samiti president K Chandrashekhar Rao and the Telangana employees' joint action committee president Swamy Goud and another leader C Vitthal. 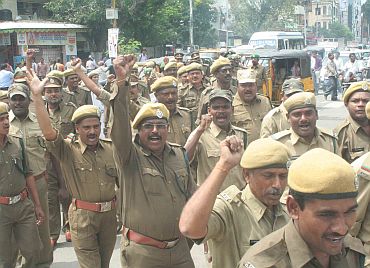 The Saifabad police station in Hyderabad has booked a case against KCR for allegedly making a provocative speech at the gathering of striking employees of electricity department.

The police alleged that KCR had asked the people of Telangana to beat up the elected representatives and other leaders of Congress party for not resigning in support of Telangana state.

Similarly a case was booked under Swamy Goud and Vitthal for their speeches at a gathering of the striking employees of the excise department in which they allegedly exhorted the policemen to join the strike for Telangana. 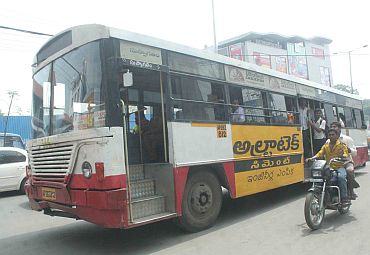 Meanwhile, though Director General of Police V Dinesh Reddy claimed that more than thousand buses plied in Hyderabad on Tuesday with the police escort, very few buses could be seen on the roads.

The DGP, who had gone around the RTC bus depots in Hyderabad, said that no body had any objection if agitation was conducted in a peaceful and democratic manner. "But if they prevent the employees from resuming their duties, the government will take it very seriously and the police have been asked to take stringent action against such people", he said.

Hardly any bus moved out of the depots in the Telangana districts of Adilabad, Nizamabad, Karimnagar, Warangal, Medak, Mehbubnagar, Nalgonda and Khammam. At many places the striking employees organised dharnas outside the depots and stopped a handful of employees who wanted to return to work. 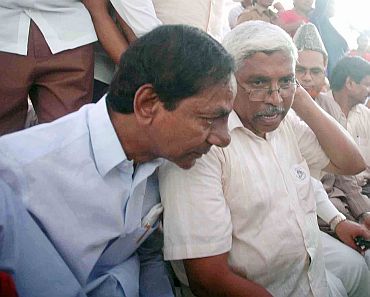 After talks with a couple of National Mazdoor Union leaders, the Andhra Pradesh government had on Monday announced the end of the strike in RTC. The NMU leaders Syed Mahmood Ali and Nageshwar Rao had said that the strike was being withdrawn in view of the hardship faced by the people.

But their announcement was rejected by other leaders of the union who declared that the strike will continue till the Centre announced the formation of Telangana state.

In another major development, the Telangana joint action committee has postponed its three-day long 'rail roko' programme scheduled to start from Wednesday.

TJAC convenor Prof Kodanda Ram said that the 'rail roko' programme will not be taken up from October 15 to 17. 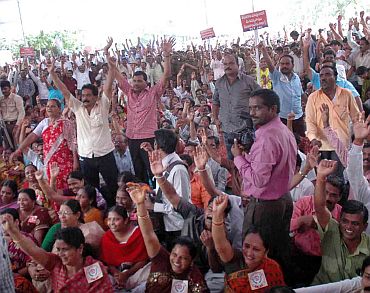 The striking employees of Telangana region also organised a massive dharna in Hyderabad and warned the government against any repressive measure.

Addressing the dharna, TRS president Rao asked the Central government not to test the patience of the people of Telangana any more.

Pointing out that more than 700 people of the region had committed suicide for the separate state, he asked, "Are you demons? How many more lives and how much more blood you want?"

He also urged Prime Minister Manmohan Singh 'not to waste any more time and take an immediate decision.'