Sign in  |  Create a Rediffmail account
Rediff.com  » News » Is Rahul Gandhi ready for the big leap in politics? 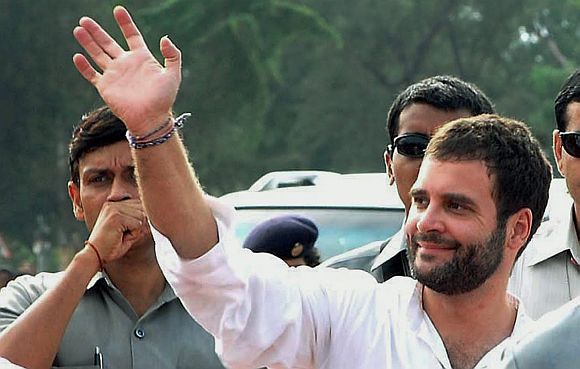 Rahul Gandhi has signalled the willingness to make the transition from the Congress' political strategy consultant to its chief-decision maker. Aarthi Ramachandran analyses whether he has it in him to make the cut?

When Rahul Gandhi was asked by a journalist in 2006 whether he had a roadmap for improving access to "opportunities" for the youth of Uttar Pradesh, he came up with one of his characteristically vague mantras. "Once you get the youth of this country thinking, the blueprint will come".

It was a bit like a doctor prescribing yoga for a TB patient. It is not bad advice for the long-term, but does nothing to address the issue at hand.

Rahul's politics has been stuck in this gear for a long time. He chose for himself the job of the Congress' big picture man shortly after his electoral debut in 2004, working on long-term strategic goals for the party, even as his mother, Congress president Sonia Gandhi, looked after its day-to-day affairs. 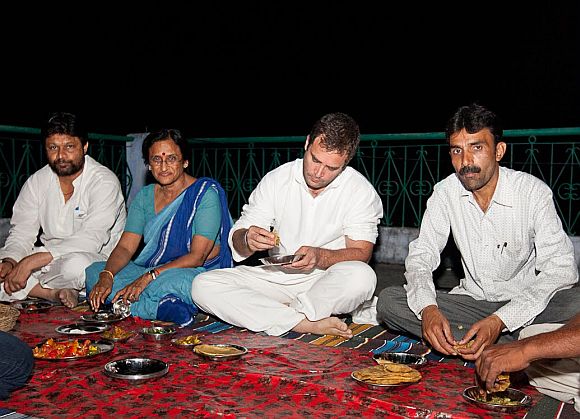 The one constant through the many things he attempted was an unwillingness to put himself in the line of fire.

With the Congress confirming his ascent to a role of greater importance, Rahul's approach to politics requires a serious change of course, and very quickly.

After the election rally in Phulpur, where he launched the Congress' 2012 Uttar Pradesh poll campaign, Rahul has shown the willingness to make the transition from the Congress' political strategy consultant to its full-time leader.

Will Rahul be able to swap his much vaunted grassroots level rejuvenation vision for a bit of medium term political pragmatism and the ability to manage crises on an almost daily basis?

The short answer is that it is going to be an uphill task. 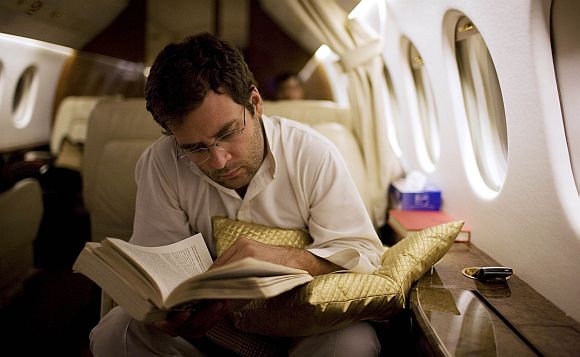 Before he stepped into politics, Rahul worked as a strategy consultant with the global management consulting firm, Monitor, promoted by Harvard guru Michael Porter, in London. The stint seems to have left a deep imprint on the Nehru-Gandhi scion's approach to politics.

Professional training in strategy consulting combined with a cautious, hesitant, and risk-averse temperament meant that he shunned short to medium-term challenges, such as a stint in the Union government, for long term projects such as rejuvenation of the Congress' youth and student wings, reviving the party in Uttar Pradesh were the Congress has been reduced to a fringe player, and brand-building aimed at projecting himself as a mascot of the poor.

This orientation in his thinking showed up as a refusal to get into burning issues.

For instance, when he was asked whether he would personally intervene to resolve the Kashmir agitation of 2010 that witnessed unprecedented stone-throwing protests in the valley, he responded, "My focus is on brining youngsters into politics and I think that's a very important thing for the future of this country. I genuinely don't like to, sort of, move from one problem to another. I like to settle down, understand a problem in detail and then work on that problem. Solving Kashmir is not a part-time problem. It is a full-time problem." 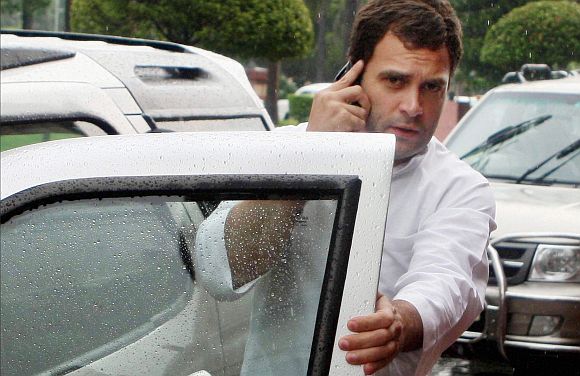 Rahul's standard response to tricky questions whether it has been about inflation or political alliances had always been that his job is limited to being the Congress general secretary for the Indian Youth Congress and National Students' Union of India.

He then had the luxury of picking and choosing his canvas. It is a completely different picture now, to put it mildly.

Other than electioneering in Uttar Pradesh and taking the Congress to a respectable tally in the upcoming assembly elections there, he has to pull the Congress and the United Progressive Alliance government, which it heads at the Centre, out a series of crises.

To begin with, he has to find ways to arrest the sense of drift that seems to have become the UPA government's leitmotif and salvage the remaining two-and-a-half years of its term. He has to develop a working relationship with the Congress' allies from the veteran M Karunanidhi to the tempestuous Mamata Banerjee. 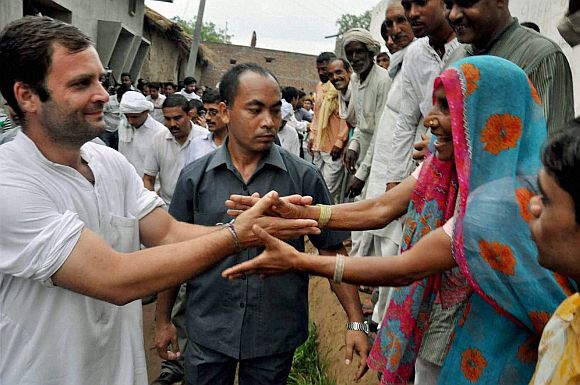 Then he has to battle the perception of the government having completely been overtaken by corruption scandals with neither the 2G scam nor Anna Hazare and his cohorts likely to fade from the scene quickly.

Then there are pressing issues such as the demand for a separate Telangana, which has been on the boil for far too long and is now waiting to explode.

On the economic front, he has to find a way to put the reform process back on track if India has to make it through the looming global economic crisis. Whether it is in foreign direct investment in key sectors such as retail, disinvestment, or labour reforms, the government is waiting for the political go-ahead.

Then there is the Opposition, which will be ever on the lookout for any slip-up on his part to bolster their charge about him being naive and callow. 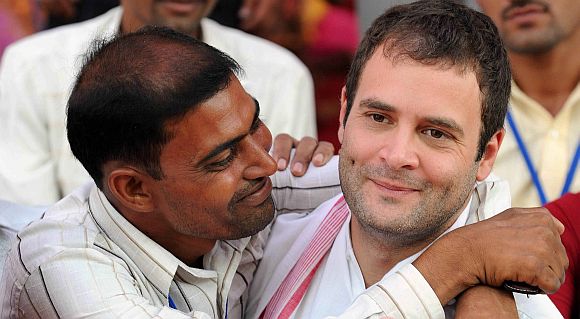 In the few instances that he has grappled with real-time problems in the past, rather than being sequestered in the comfort zone of long-term thinking, he has stumbled.

His performance during the Anna Hazare agitation proved that he had a long way to go as far as reacting instinctively to tricky situations goes. His speech in Parliament, in which he propounded what he described as the "game-changing" idea of making the Lokpal a constitutional body, did not help in diffusing the crisis at hand.

In fact, it made him sound completely off-key and unable to connect with the rising sentiment against corruption in urban India.

He managed to bungle his Bhatta-Parsaul initiative in Uttar Pradesh by insinuating murder of villagers in the backdrop of clashes between the state police and farmers over land acquisition -- a charge that could not be proved conclusively. 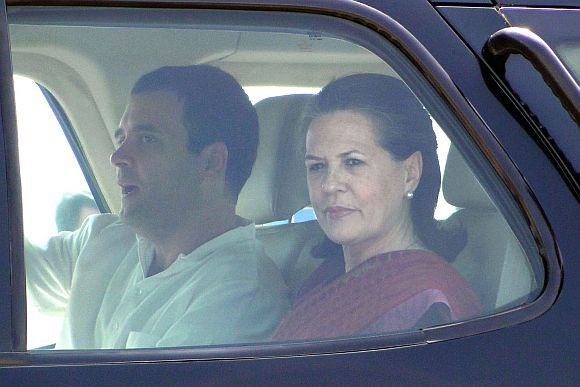 One big difference between his earlier position and the one he finds himself now in is his own willingness to play a larger role in the Congress' affairs. Maybe he has no choice, given the reports about his mother's failing health.

He is taking on much wider responsibilities as far electioneering for the coming round of polls in Uttarakhand and Punjab go. He has taken on full responsibility of the Congress' 2012 UP bid, which saw him launch the party's campaign from his great-grandfather Jawaharlal Nehru's old constituency, leaving little doubt of the kind of role the Congress has in mind for him.

Rahul requires experienced hands to guide him through the sharp bends that lie ahead. However, until now, his relationship with Congress elders has been indifferent at best and confrontational at worst.

He has not hidden his wider discomfort with the nature of politics in the Congress that revolves around entitlement and dynasty, despite his own acceptance of the dynastic mantle as the next Nehru-Gandhi heir.

Now, he may have no choice but to put his pet ideas of professionalizing and modernizing the Congress on the back-burner and turn to his mother's advisors. 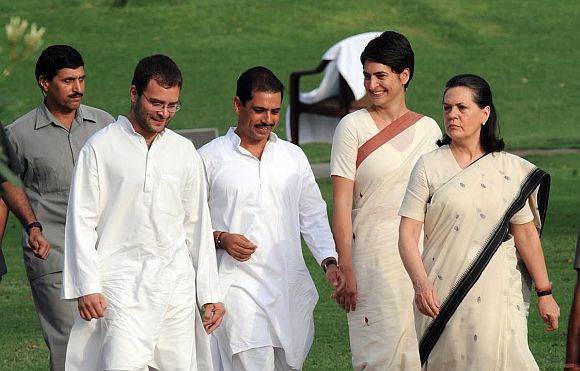 While his own team of non-political advisors such as Kanishka Singh and Sachin Rao are as untested as he is, there are some senior leaders such as Jairam Ramesh and Digvijay Singh who have worked with him on issues such as land acquisition and UP respectively. They may play a bigger part in the days to come.

The most precious advice will, however, come from his mother and his sister Priyanka Gandhi Vadra.

Rahul looks set to continue with the left-of-centre economic position that has become his mother's calling card, at least in the short term.

In his speeches he has hinted that the Congress can fight the negative fallout of corruption and inflation in middle-class India with UPA government's welfare schemes such as the Mahatma Gandhi National Rural Employment Guarantee Scheme, the proposed food security bill, and the Unique Identification number scheme which he sees as a key empowering contribution of the government towards improving the efficiency of the public delivery system.

The Rahul Gandhi era in the Congress promises to forge continuity with the present rather than usher in a new era in politics that his father's initial years in power held promise of but never delivered. Ironically, Rahul has always maintained that one of the key factors that led him into politics was the urge to pick up from where his father left off.

The writer is a journalist. She is working on a book on Rahul Gandhi's politics