Sign in  |  Create a Rediffmail account
Rediff.com  » News » 26/11: Slain cop's wife sometimes has no answers for her child

26/11: Slain cop's wife sometimes has no answers for her child 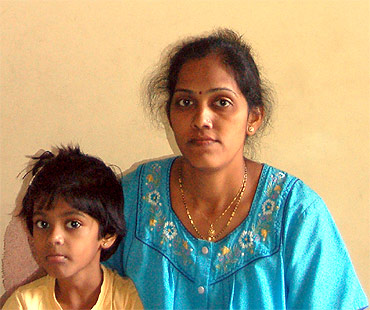 At nearly 3 pm every weekday, Samruddhi Vijay Khandekar comes home from school. After entering her one-bedroom home in Nagpada's police quarters, the Class II student casually looks at the photograph of her late father, hung high up on the wall, amidst citations that certify his act of bravery.

In ten minutes, she swallows her meal and puts on her favourite television programme Doraemon, a cartoon kids her age are crazy about.

Samruddhi's father, constable Vijay Khandekar, was killed while fighting Pakistani terrorists Ajmal Kasab and his accomplice at Cama Hospital on November 26, 2008. A bullet had hit him in the throat when the two terrorists ambushed the police team Khandekar was part of.

Despite the grievous injury, Khandekar somehow managed to pass on vital bits of what he encountered inside the hospital to his colleagues, before collapsing.

The citation referring to his act of bravery under fire, though, doesn't mean much to the seven-year-old girl studying at St Agnel's English School, a six-minute walk away from their house. However, in recent times, she has begun to ask questions about her father to Shraddha, Khandekar's widow.

'When it becomes unbearable, I tell her the truth' 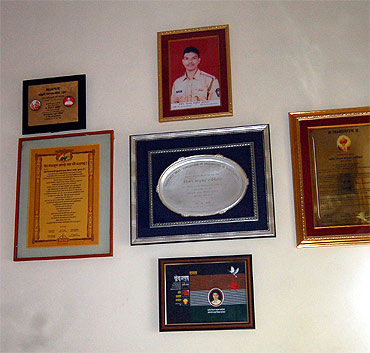 Like all innocent children who cannot comprehend death, she nags her mother with a flurry of questions, "Where is my father? Why can't I meet him? When will he come home?"

Originally from Malwan, along the Konkan coast in southern Maharashtra, Shraddha and Vijay, who belonged to Kudal, a neighbouring town, were married off by their parents on November 21, 2002.

Six years and five days after that, Shraddha became a widow.

'I have to accept what has come my way' 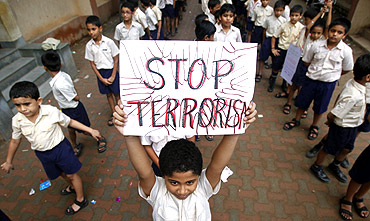 Image: A student lifts a placard as he and others line up to take part in a march for peace in Mumbai
Photographs: Danish Siddiqui/Reuters

"Terrorists are in the city killing people. Please don't venture out and keep a track of things on TV," he cautioned her before disconnecting the call.

About forty minutes later, when Shraddha called her husband, she couldn't get through. The next morning, at 6.30, Shraddha's mother-in-law and sister-in-law knocked on the door. Five minutes later, they broke the news to her.

"Ours was an arranged marriage," Shraddha, who now stays with Khandekar's mother, recalls demurely.

"I have to accept what has come my way. I have to think of my daughter's future now," she adds, sounding brave, aware of the responsibilities she now has to carry off.

'This is what happens when the head of the family dies' 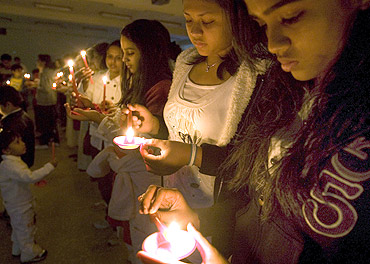 During the years when her husband was alive, they would dream about making their only daughter an IPS officer.

"His father was also with the Mumbai police," Shraddha says.

In fact, when her father-in-law died in an accident, Vijay, barely 18, was absorbed in the police force.

"Samruddhi wants to become a doctor," Shraddha says. Trying to explain her daughter's enthusiasm, she recounts how her daughter checks her whenever she falls ill.

"But it is still a long way ahead. (This is) what happens when the head of the family dies," she says, tears rolling down her cheeks.

Every few days, Samruddhi asks the same set of questions about her father. Her mother's answers remain the same. And life, in this house that the slain policeman left behind, goes on...