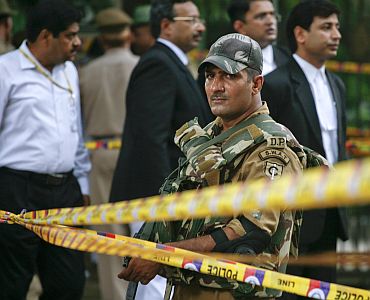 Image: A Delhi police personnel keeps vigil after cordoning off the site of the blast
Photographs: Parivartan Sharma/Reuters Sahim Salim in New Delhi

Prima facie investigations indicate that 'shrapnel' were used in the bomb that went off outside the Delhi high court on Wednesday morning, killing 11 people and injuring scores others.

A senior official from the Delhi police told rediff.com that there is a 'high probability' that potassium nitrate was used to trigger the blast.

When contacted, additional commissioner of police, KC Dwivedi, confirmed to rediff.com that potassium nitrate was used to assemble the improvised explosive device.

"Officially, samples are still being examined by forensic experts. During our site inspection, we did find white powder remains. So in all probability, potassium nitrate was used to trigger the blast. There were shrapnel inside the bomb, which looks like it was assembled professionally," a senior police official said. 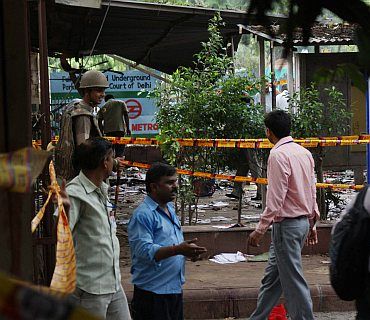 Image: Police cordoned off the blast outside the Delhi High Court

What is strange is that the bomb that exploded in the parking lot of the Delhi high court in May this year did not contain shrapnel. In all possibility, that explosion was just a dry run.

"It is too early to comment. But it does look like the May explosion was a dry run. That bomb was a crudely assembled one. It was placed in a plastic bag near a car (Ford Figo) in the parking lot of the high court. The bomb used then was what we call a crude bomb -- it was designed to cause fear and not destruction. Ammonium nitrate, triggered by a plastic detonator made from mobile-phone chips and watch-batteries, was used in that bomb with no shrapnel, which means no casualties," the officer said.

This time, however, shrapnels were used, meaning an attack meant to cause casualties. Deputy commissioner of police (crime branch) confirmed to rediff.com that shrapnel were used in the bomb. "Nature of injuries on the victims also suggests this. It is not immediately known what shrapnels were used -- steel, glasses or plastic," he said. 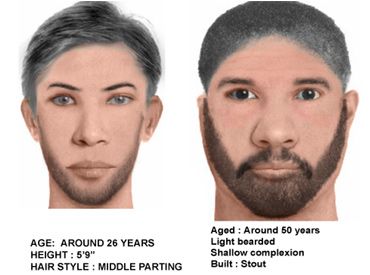 Though the probe has been handed over to the National Investigation Agency, the Delhi police is actively 'assisting' in the investigations. Technical surveillance has been remounted by sleuths of the special cell.

Police will assess and intercept communications from suspected sleeper cells of various terror modules active in the city and its neighbouring states like Rajasthan, Uttar Pradesh, etc.

The Delhi police have also beefed up security, especially in and around the Parliament House area. A senior police official said that the city is on high alert. Frisking and security checks have been intensified at the airports, metros and railway stations.

The Delhi police have also finished preparing sketches of two of the possible accused in the case on basis of eyewitness accounts.

Atleast seven eyewitnesses have claimed that a man dressed in a white shirt, armed with a briefcase, had joined the queue outside gate number 5 of the Delhi high court, seconds after which the explosion took place.