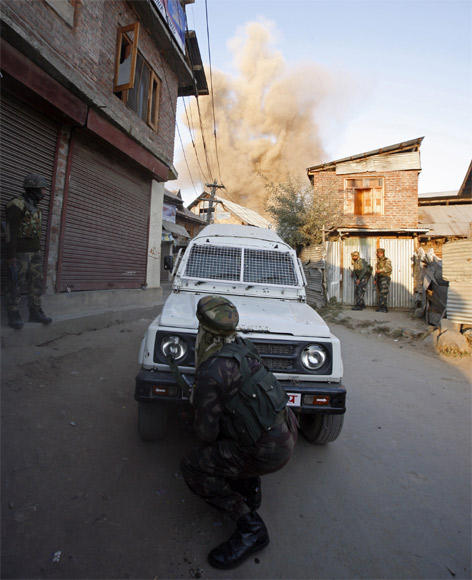 Image: A soldier takes cover as a residential house is blown up by an improvised explosive device during a gun battle between army and suspected militants in Sopore, 48km north of Srinagar
Photographs: Danish Ismail/Reuters

A staggering 94 per cent of fresh recruits of the Lashkar-e-Tayiba see Jammu and Kashmir as a "fighting front" and hail mostly from Pakistan's Punjab province from families having links with the powerful army and intelligence network, according to a United States military report.

The eye-opener report from the US military academy in West Point is a result of a multi-year research effort conducted by a lead team of five eminent authors including C Christine Fair, Don Rassler and Anirban Ghosh, and is based on a study of over 900 biographies of the deceased LeT militants. 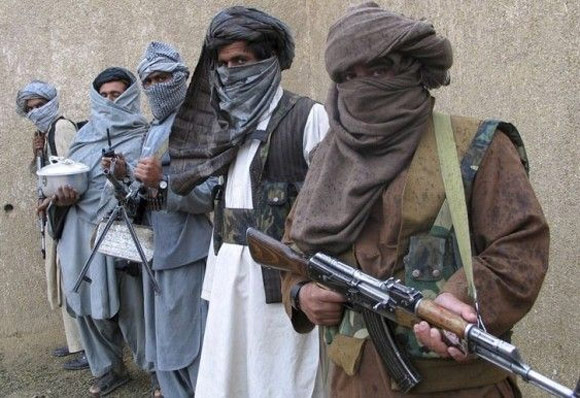 Image: 63 per cent of the LeT militants have at least a secondary education
Photographs: Danish Ismail/Reuters

According to the report that runs into nearly 60 pages, the vast majority of LeT's fighters are recruited from Pakistan's Punjab province and are actually rather well educated compared to average Pakistani males.

While LeT's recruitment is diversified across the north, central and southern parts of the Punjab, the highest concentration of militants have come (in order of frequency) from the districts of Gujranwala, Faisalabad, Lahore, Sheikhupura, Kasur, Sialkot, Bahawalnagar, Bahawalpur, Khanewal and Multan.

The report challenges the lingering belief that Islamist terrorists are the product of low or no education or are produced in madrassas, despite the evolving body of work that undermines these connections in some measure. "LeT militants are actually rather well educated compared with Pakistani males generally. This is an important contribution to the ongoing debate about the relationship between education and militancy in Pakistan," it said.

"In our data, we see that 63 per cent of the LeT militants have at least a secondary education (matric or above), suggesting that their educational distribution is slightly higher than the national attainment levels, although the numbers are not exactly comparable," the report said.

"The most common level of nonreligious education attained by LeT fighters (44 per cent of available data) before their entry into the group is matric (10th grade), indicating that on average the group's cadres had higher levels of secular education than other Pakistani males," the report said, adding they do not have high levels of formal religious education. 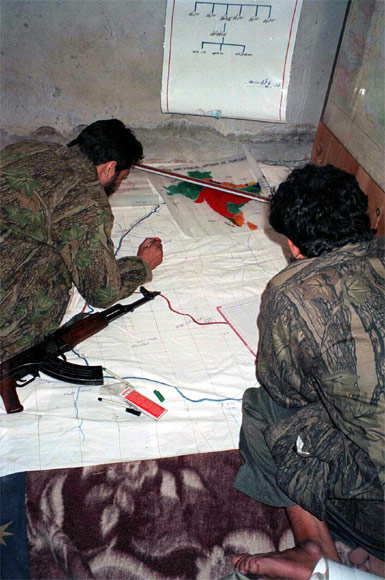 Image: Militants of the LeT study a map of a target inside Jammu and Kashmir
Photographs: Reuters

LeT training has historically occurred in Pakistan-occupied Kashmir's capital Muzaffarabad and in Afghanistan. Together these two locations have accounted for 75 per cent of LeT militant training over time, the report said.

"Ninety four per cent of the fighters list Indian Kashmir as a fighting front," the report said. Although less relevant, Afghanistan, Chechnya, Tajikistan and Bosnia are also identified in the biographies as other fronts.

The highest level of training reported by most LeT militants (62 per cent of available data) was specialised training (Daura-e-Khasa, LeT's advanced course), the majority of which occurred in Muzaffarabad. An additional 12 per cent of militants were able to name other specific training courses, which potentially followed the Daura-e-Khasa, it said. Image: Soldiers stand guard near seized arms and ammunitions at an an army garrison in Kupwara, north of Srinagar
Photographs: Danish Ismail/Reuters

"According to our data, the districts of Kupwara, Baramulla and Poonch in Indian Kashmir account for almost half of all LeT militant deaths since 1989. Kupwara, the district with the largest number of militants killed, appears to be becoming less important overall as a fighting area, with its share of deaths declining over time," it said.

The report added that the number and share of LeT deaths in Baramulla and Poonch have been increasing.

The average life of a LeT terrorist is 5.14 years 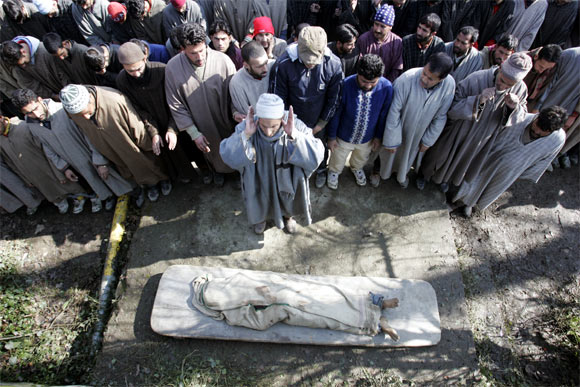 Image: Villagers pray during the funeral of a militant in Sopore
Photographs: Danish Ismail/Reuters

"Since 2000 there has been a strong upward trend in recruitment via family members and by 2004, this channel contributed to over 40 per cent of LeT recruitment," it said.

Siblings and parents are central characters in the biographies and they play important roles in a fighter's entry into and journey through the LeT, the report said. For example, siblings or other immediate family members were often the one to drop off a LeT recruit at a training camp or at the border.

The report said the mean age when a recruit joins the outfit is 16.95 years, while the militants' mean age at the time of their death is 21 years. The mean number of years between a LeT militant's entry and death is 5.14 years.

Majority LeT fighters are Pakistanis from Punjab not Kashmir 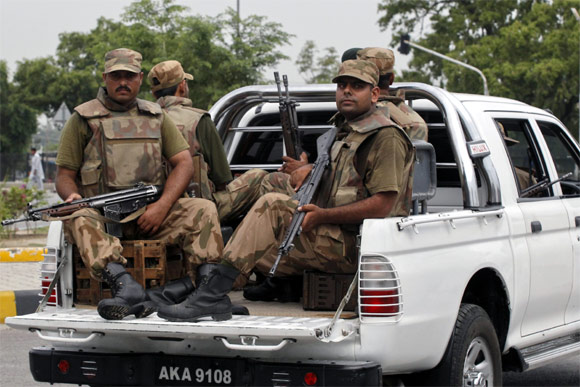 Image: Pakistan army soldiers patrol near the Minhas base in the town of Kamra in central Punjab province
Photographs: Danish Ismail/Reuters

The report declares "false" the Pakistani government's assertion that its citizens are not engaged in acts of terrorism in India or elsewhere; rather, is only providing diplomatic and moral support to the militants fighting in India.

"While few entertain these claims as credible, our database indicates that this claim is false. First, the vast majority of LeT fighters are Pakistani and most are Punjabi, not Kashmiri. It is noteworthy that there is considerable overlap among the districts that produce LeT militants and those that produce Pakistan army officers, a dynamic that raises a number of questions about potentially overlapping social networks between the army and the LeT," the report said.

Notably the uncle of one militant was a director at Pakistan's Atomic Energy Commission, while the father of another was the president of the Pakistan Muslim League's labour wing in Islamabad/Rawalpindi, it added. 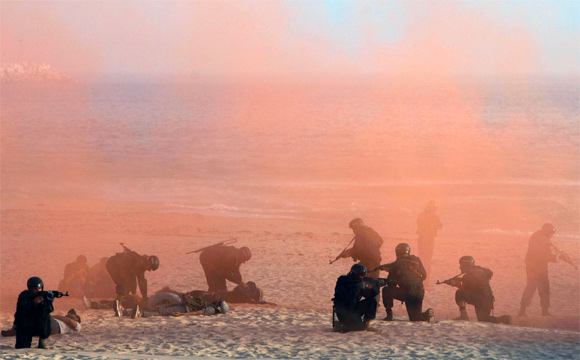 "At least eighteen biographies in our data set describe connections between LeT fighters and immediate family members (ie fathers or brothers) who were currently serving or had served in Pakistan's army or air force.

"Equally notable is the fact that the vast majority of the fighters in this database died in Indian-administered Kashmir. This truth, taken with the predominantly Pakistani-Punjabi origins of the fighters, collectively puts to rest any of Pakistan's claims about the nature of its citizens and their activities," it said. Referring to the strong links between the LeT and the Pakistani establishments, the report said should elements of Pakistan's security establishment view it in their interest to spoil peace or reignite conflict in the region (potentially to serve as a release valve for domestic challenges or to redirect the actions of militants actively waging war against Islamabad), they will likely turn to trusted militant groups, such as LeT, to do their bidding.

"For the past two decades the LeT has steadily emerged as one of Pakistan's most lethal and capable militant proxy groups. While the group has historically been used by Islamabad as an agent of regional foreign policy -- and one that has been mostly focused on waging a low-level war of attrition in Kashmir -- a steady array of incidents tied to the group over the last decade strongly suggest that the outfit's interests are evolving and that its operations in the future might be less constrained," the report said.

According to the report, militants are typically low -- income workers who come from the poor or middle-lower classes. The top five occupations of the militants, as revealed by the data, are factory worker, farmer, tailor, electrician and laborer. The number of LeT members who previously served in Pakistan's armed forces is remarkably small, only seven out of 270, or less than 3 per cent, it notes.